The llama is a mammal, a relative of camels and Alpaca, as they all belong to the same family of Camelids. At the present time this animal indispensable in husbandry. Their wool has incredible quality, so valued all over the world, and the Lama — a great help in transporting the cargo. But valued in the llama not only that.

The ancestors of animals lived in North and South America millions of years ago. It is known that llamas were domesticated around four thousand years ago South American Indians — the inhabitants of Peru. Ancestors was the guanaco, which lived (and still live) in the mountains of Peru called the Andes. 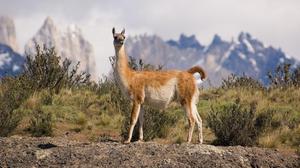 The Indians noticed that these animals can significantly make their lives easier: giving good wool, meat, to transport heavy loads. And that’s the way already domesticated the llama people long before the arrival of horses in South America in the last Millennium was the only assistant in the transportation of goods.

At the present time, the lamas are themselves lamas and their ancestors, guanacos living in the wild to this day in South America.

Lama — herbivore adapted to life high in the mountains. Reaches a height of 120-130 cmand weight 70-80 pounds. Thanks to a long neck rise to the top comes right up to two meters! The color is very diverse: white, grey, dark, brown, Golden, with or without spots. They live for about 20 years. Lahm is also possible to note an elongated, thin neck, large eyes and pointed ears.

Unlike camels, our inhabitants of the Andes are characterized in that they have no hump. Also, unlike relatives, they are usually found in cool places or mountainsbecause they have adapted to traveling in the mountains double hooves to the fingertips. But they, like camels, can start to spit if something is not to their liking.

This herd animals, so they need to contain at least two or three individuals. 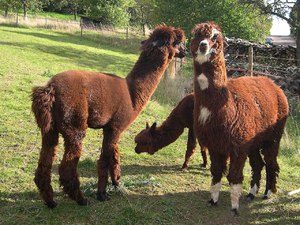 Sexually Mature females reach age at first year of life and males on the third. The male has a harem of two, three or more females who give birth to usually one cub after 11-12 months of gestation.

The descendants of the inhabitants of the Andes are found in captivity in North and South America, Europe, Australia. Thanks to the adaptability to life in the mountains were spread in the Alps (Europe). They are also often seen on the lowlands in temperate latitudes.

A bit about Alpaca

Why, in this article we have never mentioned the Alpaca as members of the genus Lam? The fact that Alpaca for a long time attributed to this genus, because they believed that they are descendants of the guanaco. In 2001, however, found out that their ancestor is actually a kind of vicuna. Cause prolonged delusion served the resemblance, almost the same habitats and that alpacas and llamas can cross, and then be born cubs, called wario.