Wolverine combines in its behavior are two main qualities — caution and audacity. She’s not afraid of humans, but tries not to meet him. For hunters this is a rare production. Stealth helps the Wolverine to avoid the danger, and the agility and dexterity make it a serious contender. Among the peoples of the North the Wolverine has a reputation as evil, mysterious creatures. The Sami call it “animal of the devil” because of the red reflection in the eyes.

The inhabitants of Chukotka called Wolverine Yeti, as to predict the appearance and disappearance impossible. The Norwegians came up with the beast’s unusual nickname of “mountain whale.” It characterizes the size of the specimens and the main place of their habitat. 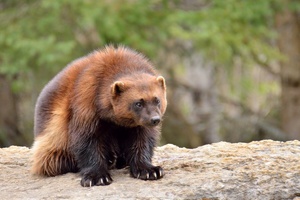 According to scientific classification, Wolverine selected in a separate genus belonging to the family of mustelids. Zoologically it is close to such animals as marten, badger, sable, otter. However, several times greater than their size. From a distance the silhouette of the Wolverine resembles a bear. Therefore the inhabitants of the Scandinavian Peninsula formed the belief that Wolverine is a bear who couldn’t grow up.

In fact, the size of an adult is comparable to the size of the dog, about 1 meter in length. The tail is 20 cm. the Average weight of 10-14 kg. Large males can gain 20-35 kg. Animals of both sexes have no significant differences. 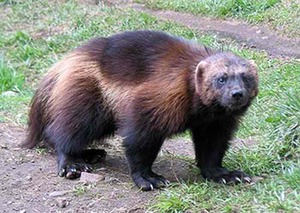 The head is round on the massive short neck. The ears are small, hairless. Wolverines have well developed senses. Excellent vision and hearing. Strong powerful jaws, allowing it to crush bones.

At first glance, the Wolverine seems awkward and clumsy. The body is squat and dense. Fur long, thick, hard to the touch. It has excellent water-repellent property. The coloration of the coat is predominantly a dark. Head and neck brown; forehead and trunk light strips. Muzzle black. During the year, the animal moults twice, replacing a thick winter coat, with short and rare summer.

Thick legs with wide feet, hooked sharp claws. Hind legs longer than the front, which gives the beast a special gait. Moves fast, but incredibly hard. The day she can cover the distance of 85 km.

To paraphrase a famous saying, we can say that the “Wolverine paw.” The structure of the limbs gives the animal several important advantages: 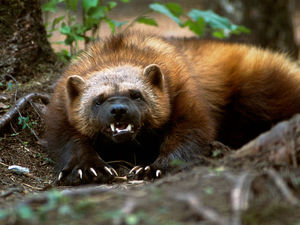 The Wolverine is a rare animal. The area of its habitat is concentrated in the temperate zone of the Central and Northern parts of Eurasia and North America.

She resettled in remote areas of the taiga, the tundra and forest tundra, deciduous forests. Shall dwell among the rocks in mountainous terrain.

In case of necessity moved to live in peat bogs and wetland areas. Found on the Islands of the Arctic, but does not tolerate severe frosts.

Wolverine is a born nomad. She is constantly in motion. Typically, one animal controls the territory of 100-200 square kilometers. Makes his rounds, moving from place to place. 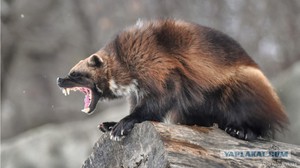 Wolverines are known for their endurance and vigor. These qualities help them in the hunt. Predator for a long time are able to chase preyuntil it’s exhausted. Live and hunt wolverines alone. Very rarely have a joint hunt for big game. In this case, two or three wolverines are thoughtfully and coherently. When one pursues the game, others await him at a certain place and suddenly attacked. Caught up in the game together eat.

The food is unpretentious, content with any prey. Can do without food longer than 7 days. However, he was famous for his gluttony. Therefore, received the Latin name “glutton”. Energy reserves accumulated in the body in the form of fat.

Their favorite food is carrion. Has prepeared for a few kilometers to smell the blood of a wounded animal, or the smell of decaying residues. Prefer to eat animals killed by other predators. But the Wolverine became famous as a successful hunter. Usually hides in the tree waiting for suitable prey. Jumping on top of the back and the spine breaks or cuts an artery with his teeth. A large part of the meat immediately eat, and hoard the rest as a reserve. Wolverine hunting on various ungulates (deer, ROE deer, elk), wild birds, rodents. In the summer in search of eggs ruining the nest. Winter fishing in the river. Not disdain vegetable food: roots, berries, nuts, mushrooms.

And, above all, Wolverine performs a sanitary function. It is estimated that 10 eaten by ungulates, only three produced independently. The rest is taken from other prey or carrion. Since dying in the first place, sick individuals, Wolverine is also exposed to the danger of infection. Orderlies forests themselves often die from infections.

The animal activity is manifested at night. Day Wolverine rarely goes hunting, preferring to sit in the shelter. The beast has no permanent lair, because all the time is moving and doesn’t linger for long in one place. Day prone comfortable in the crevices of rocks, in the trees. Winter makes indentations in the snow. 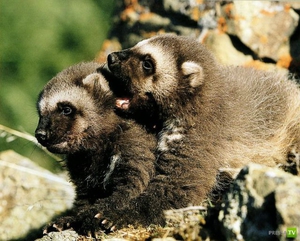 Live apart. Meet at the beginning of the breeding season in spring and early summer. Males vie for the right to possess the female. Satisfied deadly fighting. Couple living together for about a month. Then the male goes off, to return briefly at the appearance of the kids.

For wolverines is characterized by the so-called. latent pregnancy. The fertilized egg is delayed in development for some time (from several weeks to several months). The mechanism of embryo development is triggered, all the females at the same time.

Therefore, despite the different dates of conception, babies are born in the same period (February—March).

The female cares little about the arrangement of a comfortable den. Cubs can be born among the piles of stones or tree roots. In one litter of 2-3 kids. 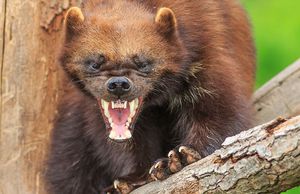 The animal clearly limits their possession. Males mark notable places sharply smelling secretion, which is released panelname glands. The ability to spray unpleasant-smelling liquid, like skunks, is another of the interesting features of wolverines.

Animals try to avoid meeting with the evil, durovernum enemy. Taking advantage of this, Wolverine is sometimes so impudent, that runs much stronger opponents from their prey.

The wolverines almost no enemies in the wild. The beast behaves cautiously and discreetly. In case of danger, protected by sharp teeth and claws, the enemy pouring a caustic deodorant.

A relationship with a man 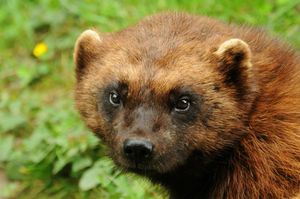 In addition, the wolverines are hunted for their skins. In appearance they are inferior to the beauty of other representatives of the Mustelidae family.

The value of skins in its water-repellent qualities. The fur is warm and corsets in the cold of winter. Because it is worth more than the pelt of a sable. Many zoos are willing to pay large amounts of money for living individuals. Wolverines are rarely seen in captivity. Caught young quickly adapts to new environments, accustomed to man, becomes a hand. However, being in zoos, the offspring of Wolverine quickly killed.

In the wild the animal can live up to 10 years, in captivity up to 17 years.