Australia is a fantastic continent. According to scientists, this ancient continent is on dokembrijsky platform. which was formed more than three billion years ago. Due to the fact that the continent of Australia would be open much later than all the others, the nature here is well preserved. North pleasant breeze, bringing with it the warmth of the Indian ocean to Australia. And to the South the cold winds that bring the frost from the coast of Antarctica.

The awesomeness and the uniqueness of the Australian world explained also his relief. The coast here is sinking in large number of green trees, and the Central part of the continent is a zone of semi-deserts and savannas, sometimes alternating with Islands of vegetation in the lowlands and along riverbanks. 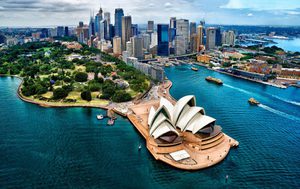 At the moment in Australia was more than 1000 operating reserves, which presents Australian animals and plants wildlife.

Unique climatic features and location of Australia have identified the individuality of its flora and fauna. Before you can tell what animals live in Australia, you need to talk about their living conditions, namely on the plant world of the continent. 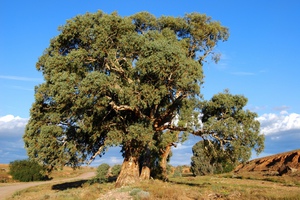 Vegetable symbol of the continent is considered to be eucalyptus. This large tree has strong roots that go deep into the earth , at a distance of about 30 meters. Fantastic plant is well adapted to the arid climate of the continent. Eucalypts that grow near marshes, is able to suck the water out of the reservoir, and thereby to drain. And if you go to a huge eucalyptus forest, we can see that there is almost no shade! All this is due to the narrow young leaves of the plant, which are inverted to light edge.

East coast of Australia is washed by the waves of the Pacific ocean. Here are thickets of bamboo. In the Northern part of the continent settled dense subtropical forest. Here there are tall palm trees and mangroves.

Most precipitation falls on the North coast – that is why there grow acacia, pandanus, horsetail and ferns. Further to the South the forest becomes less and starts district of Savannah. In the spring, it is a rich beautiful flooring of large grass, and by the summer dries up and turns into a desert.

What animals grow in Australia? This continent is home to almost 10% of the biological diversity of our planet. This makes it one of 17 countries in the world with an exceptional and rich flora and fauna. Approximately 80% of Australian animals are endemic, that is, the animals nowhere else to be found.

The marine life is as diverse as life on earth: near North-Eastern shores are widely scattered the world’s largest coral reef. Its area is approximately 344 thousand sq. km. And also, there is a large diversity of mangroves and marine algae. These areas serve as a refuge for most fish and sea turtles.

However, climate change and other environmental factors pose the fauna of Australia is under more threat. Local environmental organizations along with the people direct all their effort to research and implement strategies for the conservation of plants and animals of Australia. 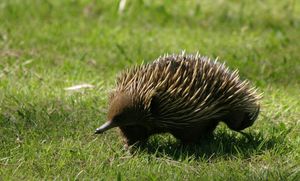 Echidna has an elongated snout and a special language, which it catches insects at high speed. The body is completely covered in fur and spines that deter predators. Powerful front legs and claws allow it to quickly dig under the ground.

Australian echidna refers to odnorodnoi group of mammals, so she lays eggs.

The Asian water Buffalo was discovered on the continent in the 19th century. These are large animals, preferring to live near water bodies with stagnant water. This herbivorous mammals, and seaweed make up a large part of their diet.

Camels were brought to Australia in the 19th century. They are quickly able to adapt to the climatic conditions of the continent. To date, the number of population of camels collect about 50 thousand individuals.

Camels have a group of physiological adaptations through which they can stay without water for a very long time. Their humps are composed of fatty tissue which spreads throughout the body and helps the mammal survive in a hot environment.

The Dingo is an Australian wild dog, which is the largest carnivorous animal in Australia. 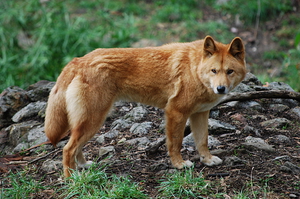 In fact, there is disagreement about whether the Dingo friends of the animals to the mainland or not. The reason is the fact that unlike other Australian animals that lived on the continent for millions of years, the Dingo has only been 4,000 years ago. Even though they were domesticated by the aborigines, dingoes are considered wild animals.

Usually these dogs live by themselves or in small family groups. Eat a little of everything from kangaroo ending with rats and frogs. This dog is not barking, and screams and howls like a wolf, especially at night.

The largest specimen of the kangaroo family were able to reach the weight of about 90 kg, and body length can be up to 1.3 meters.

As these animals are marsupials, the females have a pouch on the abdomen. There they carry their babies. The main characteristic of the kangaroo is the position of the body. It them vertical. This is because they have small forelimbs and a large thick tail.

Life expectancy of a kangaroo varies from 6 to 27 years. These unique animals are a large part of their time in the arid parts of the continent, but despite this are able to swim well.

The Koala bear is cute, plush, herbivorous animal that lives in the crowns of eucalyptus. The distinctive features of this animal include stuffed gray fur, large black nose and large fluffy ears. And the Koala has its claws very sharp claws, which help it to climb trees and cling to branches.

Mostly koalas spend the whole day in the trees, and descend to the ground only to move from one tree to another. Their diet consists almost exclusively of the leaves of eucalyptus tree. For most animals, these leaves are poisonous, but koalas get from them all the necessary moisture, so rarely drink. 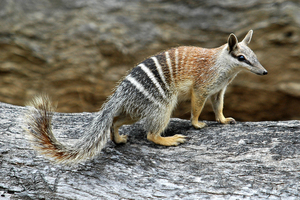 Numbat (marsupial anteater) is a small animal related to the order of marsupials. They are energetic only in the afternoon.

On average, the size of the marsupial anteater do not exceed more than 27 cm in length. It has a red-brown head, shoulders and upper body, gradually passing into the back striped piece.

Prior to 1871 about the monarch butterfly were not known. Today it is very common in the States of Queensland, New South Wales, Victoria, South Australia.

The wingspan is about ten see

The red fire ant is a dangerous insect that has a stinger with toxic poison. This poison is very dangerous and can cause death allergic person. The birthplace of these ants is South America, and in Australia they appeared only in 2001.

In size they are very microscopic — body length of about 2-4 mm. Male and female can be distinguished by color. In males it is black, females are red.

Giant lizards are different in size and color, but they all share the main feature: the blue language, which serves as a protective mechanism. When the lizard anything threatening, she sticks out his tongue and hisses loudly, thus scaring off predators. Usually this is enough to think that she’s dangerous. But in fact a giant lizard is totally harmless.

In Australia you only see two types of crocodiles: freshwater (Australian slender-snouted) and marine (saltwater).

Saltwater crocodile is one of the major modern representatives of reptiles. It can be found in the North Australia and also in Asia. Prefers warm climate and is able to swim long distances.

The dimensions of the saltwater crocodile do not exceed seven meters in length and can weigh more than one ton.

Australian slender-snouted crocodile is a small crocodile species, with a length of three meters and weighing 40-80 kg. These reptiles are quite timid, and have a narrow snout and small teeth in comparison with the marine crocodile. 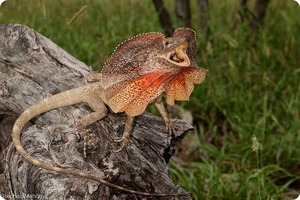 The frilled lizard lives in Australia. Are her skin folds on the neck that resembles a collar. If threatened, the lizard relies on the hind legs, straightens his collar and a wide open mouth. If such protection does not scare the predator, the lizard runs very quickly. And this collar helps to regulate body temperature.

Toad-Aga were brought to the continent in the 35 year of the last century to protect the sugar cane. But against the pests they were useless, and then spread throughout the continent and became a great danger to the biological diversity of the continent, as it is poisonous.

This bird, with a length of about 13 cm, has a very beautiful body color: green back colour neck, chest purple and yellow tummy.

It is the second largest bird in the world, not counting ostrich. And it is the most dangerous bird on planet Earth. The cassowary has very powerful legs with sharp claws, which he attacks in case of danger.

Common cassowary is endangered. Today was only 1,200 individuals of this species.

The cassowaries have dangling earrings on the neck and growths in the head. Their shade can vary depending on the condition of a bird. The basic nature of these colors so far and have not been studied. They are very flexible and fast, able to accelerate to 50 km/h and jump at a height of 2 meters.

Cockatoo is a large parrot, which is very common in Australia. His height may be 40 CC. Characteristic symptom of this species of parrots are the long feathers on the head. The beak they have a very strong, which helps them to crush nuts and seeds. In addition, they eat roots and grubs.

Black Swan is a large water bird of Australia. Earlier, people thought that all swans are white color and was very shocked when I first saw them.

EMU is a flightless bird that have strong powerful legs with three toes on each foot. They live in small groups, but can form and the flocks of thousands of individuals during migration.

5 Comments on “The fauna in Australia”