You can’t open Google News without seeing multiple headlines about interpreters. This has us thinking, what if interpreters sat in on closed-door meetings held by animal abusers?

In light of the hype surrounding interpreters, we’re taking 10 words and phrases commonly used by animal abusers and interpreting their real meanings:

If you think anti-suckling devices look like torture tools, it’s because they are. They’re used to prevent calves from drinking their mothers’ milk. The device is attached through the calf’s nostril and often has spikes on one side.

In the medical world, artificial insemination is a fertility treatment used by consenting, hopeful parents-to-be. In the animal agriculture industry, the term is used to describe the process of forcibly violating an animal sexually-in other words, rape. Female cows, pigs, and turkeys are routinely raped on farms when their bodies are violated through “artificial insemination.”

For many, the word “harvest” conjures up happy images of bountiful fruits and vegetables. But in the animal agriculture industry, it’s used synonymously with “slaughter,” a word that brings to mind scenes of bloody, horrifying murder. Seriously, does the picture below say “harvest” to you? 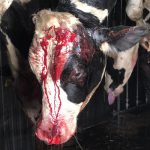 The toes of rats, mice, and other animals used in experiments are “clipped”-which means that the tissue and bone of the toes are severed, without any pain relief.

The tails of pigs-even ones on organic farms-are often cut off, and their ears are “notched,” like the one below. Sometimes, rings are also forced into their sensitive noses in order to prevent them from rooting in the grass and dirt, which is a favorite pastime of pigs.

Like “cage-free” eggs, items labeled “free-range” embody false advertising at its most deceitful. A PETA eyewitness exposé revealed that hens kept for Nellie’s Free Range Eggs were anything but “free-range.” One shed was packed with 20,000 hens, and each bird had only about 1.2 square feet of floor space. These “happy hens,” as Nellie’s referred to them, were missing the tips of their beaks-the result of another standard industry practice. Many were also missing feathers. See for yourself:

Animal agriculture’s favorite catchphrase seems to be “humane meat.” But as numerous eyewitness investigations have proved, “humane meat” can only be called “marginally less cruel meat” at best. We have yet to find a “humane” factory farm where animals’ tails aren’t cut off and their ears painfully notched; where they aren’t debeaked, dehorned, or castrated without anesthetics; where they aren’t kept in crowded conditions; where they aren’t sent to a feedlot; or where they are instantly killed without the trauma of capture, the horror of transportation, or the terror of seeing other animals killed before enduring the same fate.

The word “culling” sounds cool, right? It’s not. It means to kill animals, such as deer and seals or male calves, who are useless to the dairy industry.

This is a fiercely uncomfortable plastic or metal frame that’s used to restrain primates in laboratory experiments. The irony (“gentle”? seriously?) of the term is certainly not lost on us.

Oh, wait, sorry … this term means exactly what it sounds like. Rape racks are used to keep cows still so that they can be forcibly impregnated in order to keep their milk flowing. After they’re raped repeatedly, their babies are torn away from them, usually within hours of birth.

These industries are attempting to mislead you with deceitful euphemisms and deceptive labels. But-with a little research-you can be your own interpreter, and you can save lives. If you’re ready to follow a lifestyle that’s free of rape and slaughterhouses, go vegan. You can save nearly 200 animals per year by doing so-and that’s no misinterpretation.