With NIH funding, Aneja had induced painful and deadly sepsis in hundreds of mice, puncturing their intestines and allowing fecal matter and accompanying bacteria to leak into their stomachs. Thanks to your actions, that government gravy train has been derailed, preventing more mice from being subjected to unimaginable agony.

July 20, 2018 Update: Huge news-we did it! Thanks to your calls, e-mails, and protests, Rajesh Aneja is without funding from the National Institutes of Health (NIH) for the first time in more than a decade.

Over the years, PETA has exposed many hideous experiments on animals. This one is right up there with the worst.

During our eyewitness investigation at the University of Pittsburgh (Pitt), we discovered that experimenter Rajesh Aneja punctures the intestines of mice so that fecal matter and accompanying bacteria will leak into the animals’ stomachs, producing a condition known as sepsis-a serious reaction to severe infection. (Watch how this awful procedure is done.)Aneja is conducting this study-with Pitt’s approval-even though we’ve known since 2013 that experiments on mice tell us nothing about what happens to humans with sepsis. (Learn more about sepsis and why these experiments are useless.)

These mice are doomed to experience a horrible death. Here’s what Aneja makes them endure as infection overtakes their little bodies:

These animals eventually become so sick that they’re unable to move.

Even at that point, an eyewitness saw that they weren’t put out of their misery. One veterinarian who works in this laboratory observed that the mice were “falling over dead.” 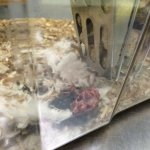 In 2013, a landmark study that took a decade to complete and involved dozens of researchers from institutions across the country found that the results of sepsis experiments conducted on mice can never be applied to humans, because the condition isn’t the same in mice as it is in humans. The study was so groundbreaking that the head of NIH, the world’s biggest public funder of biomedical experiments, commented on it. NIH Director Francis Collins wrote, “No wonder drugs designed for the mice failed in humans: they were, in fact, treating different conditions!”

Who is letting this happen?

How did experiments that allowed animals to suffer more than is considered acceptable even by laboratory standards and that are utterly useless in improving human health get approved in the first place?

Pitt’s Institutional Animal Care and Use Committee is the oversight body responsible for both approving experiments and ensuring that animals in its laboratories don’t experience pain or distress beyond what is deemed “necessary” for the experiment.

We’ve asked the university’s chancellor to end these experiments immediately.

We’re also asking NIH, which funds Aneja’s experiments, to heed the results of that groundbreaking 2013 study and to cease funding all sepsis experiments on mice immediately.