Woodcock – one of representatives of a large group of waders. Sandpipers have long been a desirable prey for hunters. Since that time, there were many ways to hunt this game.

Including hunting with a decoy woodcock.

Most shorebirds prefer to dwell near the water. However, the name woodcock derived from the German “forest Kulik,” which refers to features of its habitat. However, although the woodcock lives in forests, but prefers them it wet. Has a long beak, which is useful for the production of food: these birds eat mainly earthworms. Color the bird has a rusty-brown, darker on top than the bottom, there are marks of black color.

Need to know: Important for the hunter feature in the behavior of the woodcock – pull. So we call the mating of birds in the mating season, and in normal times it’s pretty silent. And during the search for couples, males on the fly to produce specific sounds, similar to the husky pohryukivanie. The cry consists of two parts, they are called Tikaram and herkenham, . So woodcocks attract females. This flight is called thrust. Females in response to whistle – “zakaut” – with the earth, so are formed the pair.

Hunting on the spring-powered woodcock

It has long been hunting for the spring tension on the courtship display of the woodcock is a fascinating and effective lesson.

Pull snipe occurs at the end of March – April. The mating time is from sunset to complete darkness, then repeated at dawn. Hunting is based on the knowledge of the mating places woodcock from year to year, they are the same. Hunters await thrust and shoot at the flying woodcock, focusing on the sounds.

You need to know: Spring hunting on draught permitted only on males! Sometimes male and female, formed a couple can go together to make sounds. But females can only “Cikat”, so they are distinguished by shooting only birds that “Harkat”.

Rod hunt woodcock and with call. Its use is based on the imitation of the sounds of the woodcock.

In all territories where the practice or was previously permitted spring prey of woodcock, had spread and hunting for traction with call. For example, there are a variety of sample mancow from France, Germany, Italy, Austria – although now it is allowed only in autumn or winter hunting, the samples of mancow preserved. There are, of course, in Russia. And also have certain traditions. 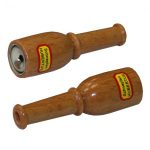 It is known that in the 19-20 centuries, Russian hunters used a decoy woodcock, who own and produced. He published it as “tikanga” and “horkage”. Thanks to the hunters memories of that time preserved a description of the semolina.

Russian decoy woodcock in the past looked like this: a box with a length of 20 cm and a thickness of about 3 cm Of bone boxes came out of the tube, along the length resembling a match, its a little more in thickness. The product side has been provided with a finned wheel 1 cm thick and 0.5 cm in diameter.

A cunning device was that the two elements to each other were not associated. Turning the wheel, imitated “horkage”. And dunuv into a tube, it was possible to “tikanga”. The author of the description adds that both of these sound to attract the bird, forcing him to turn to the man. But certain necessary skills in the use of a decoy and the ability to imitate sounds. In addition, the bird may not react at all, to the success influence and peculiarities of a particular male, and traction time.

Existed separate monkey of two types – mechanical and wind that we had blowing. Currently mechanical monkey partially replaced by electronic devices that, with varying degrees of success to compete with wind.

The monkey thinks part of the hunters are totally unnecessary for hunting woodcock. Others have learned to use these devices to obtain a good extraction.

Today there are two main types of mancow on the basis of their actions.

Monkey also differ according to the material from which is made of wood, metal or a number of polymers.

Decoy woodcock with their hands

A long time in some villages passed the art of making mancow. First and foremost, this applies to wind instruments. Them carved from wood, giving such a structure that when blowing out the sound, as similar to the need, in this case, the voice of the woodcock. There are craftsmen to create a mechanical monkey from the tubes, the main thing here is to choose the right materials.

The easiest way to make yourself and analogue electronic semolina – elementary record player on the right sounds and play them back to nature. With a variety of modern gadgets the possibilities are expanding, and many hunters try to experiment in this area.

Rules for the treatment of a decoy woodcock

Before you go hunting, you need to make sure whether a decoy. With self-manufacturing, the wizard usually has the necessary knowledge. If the device is bought, usually it is already configured. I advise you to choose a decoy with fixed settings, to avoid the possibility of something accidentally to change and spoil the hunt.

The essence of hunting woodcock with a decoy – to lure the bird. When it starts pull the hunter out of hiding signals. Males take their calls for the females, change the direction of the summer and fall under the shot. By submitting a series of signals, it is desirable to assess the situation. If the bird is too close, beckon, why are you here to freak her out.

To decoy not to lose, preferably hang it on the lace on the chest. Then the hands will be entirely free and the device will not fall to the ground. Dirt, dust, moisture, litter may not only damage the unit, but just incapacitate him. If when blowing into a tube accidentally got saliva, you need to blow the whistle and dry, dismantling for parts.

Useful tip: To decoy worked well, you need to store it properly. The place should be clean, dry, free from dust and direct sunlight, especially for wood instruments.

Hunting woodcock with call will be interesting and successful if you know the rules of using this device and follow them.