During the current is one of the most exciting pursuits. Black grouse begins to turn in the early spring, attracting females. At the beginning of the current, old male kosachi participate. The first currents are not continuous in time and occur when males sit on trees. 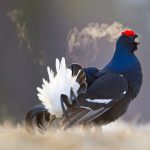 Gradually, with the transfer of current to the ground, an increasing number of birds take part in it. As a rule, the current occurs in the same place and therefore the hunters have the opportunity to prepare for the hunt in advance, knowing the place where the current will flow, equipping the shooting site. Consider one of the ways to hunt for black grouse at the current – hunting from a hut.

Preparation of the hut

Hunting for black grouse, for a current is better to lead from a hut. The hut is set about 40m from the current. The construction of the shelter should be carried out a few days before the current, giving the birds a habit to look at it. If there is no groundwater, a small pit breaks out under a bush or tree. The pit is needed to reduce the height of the hut. Then a hut is built of branches that grow in this place.

Spring grouse hunting Since the shelter will have to spend a lot of time, place inside a seat for sitting out of stumps or a thick tree. Also put an inclined pole, serving as a support for the back. Equipped with several loopholes for shooting. It is necessary to pay special attention to the bottom of the hut. It is carefully concealed, because the current is on the ground and the black grouse can see the hunters.

Preparation for the hunt from the hut

In the sheltered shelter, one must come before dawn, moving with great care, no matter what, to disturb the birds sleeping next to the current. Hunting for grouse on the current requires compliance with silence. The loud flapping of wings, characteristic for the flight of black grouses, announces about the arrival of birds and the early start of the current.

The current begins in the dark and therefore the hunter must be careful not to give out his presence, since in the darkness of the birds is not yet visible. With the dawn, the whole picture of the current opens before the hunter. Cocking each other, roosters dance in the clearing. The songs of black grouses are getting louder, there are fights between the males. The number of birds on the current can be up to 30 individuals.

Preparation for the hunt from the hut

Spring hunting for black grouse Shooting usually occurs 30-40 meters before the current, so it is advisable to set the current for milestones for better orientation in the distance. The sounds of the shots only scare the birds off for a short time, and the current continues despite them. For hunting use fraction number 3-5, a gun with a sharp, constant battle, at this time the black grouse is strong on the wound.

A padded bird can not be picked up until the end of the current, the sight of a man will scare away the game and the current will stop. Usually the current ends by 10 am. Do not every day to hunt in one place. Constant sounds of shots can scare the bird from this place. Yes, and in general, why arrange a mass shooting of a bird. Let them grow and multiply. And so already, it became difficult to find black grouse, all young animals are dying because of wrong hunters.