The rules governing the status and activities of hunters, require not only a departure from this purpose into the forest at designated times of the year, but also documentary evidence of the right to such employment.

The opportunity to get game granted to certain categories of citizens. It includes all persons who managed to obtain a hunting ticket Federal unified sample. Such are the demands of the law regulating the fishery on natural objects (N 209-FZ of 24 July 2009).

Citizens is only going to deal with shooting game, will have to go through all the procedures that precede obtaining a hunting ticket.

Where draw up this document?

The answer to the question about where to get a hunting license, depending on the area of residence or stay of the applicant. The authority to issue these documents were transferred to the regional level. Each issuing body has a different name. If hunting in Moscow issued by the Department of natural resources and environmental protection, in the Ivanovo region, these powers are exercised by the service for the protection of wildlife.

There are the following ways of registration of the document.

The document will require the personal presence of the citizen in the authorized body, regardless of the method of sending a letter.

That would require to issue the document?

Everything you need to get hunting ticket are listed in the order of the Ministry of environment No. 13 of January 20, 2011. Citizen must submit the application form. E 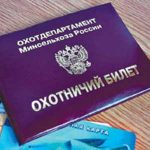 the form can be filled out on the spot or make all the data in advance, downloading the email from the site responsible for the issue of a government (then clearance will take less time). You need to carefully fill in all the blanks document. Mistakes can lead to refusal to issue a ticket.

To written application will have to make next.

Often asked question is, what is the procedure of making paper. To issue a hunting license will be free because the law does not provide for the transfer of money for the preparation of the document.

Who has the right to obtain the document?

Before you make a hunting license, you must examine the list of people who shouldn’t have them. The law establishes the following categories of citizens fall under the ban.

Other grounds to refuse registration of the document, the legislation does not provide.

What is hunting and how to pass it?

Before you get a hunting license for the first time, the applicant must demonstrate knowledge in specific areas (established by order of the Ministry of natural resources N 568 of June 30, 2011). These include the following.

Separate issues relate to confirmation of existing knowledge. The procedure does not imply the exam. Knowledge of hunting confirmed by the signature of the applicant on written request.

Despite the fact that no special checks are not carried out, it is better to really study the rules. Before first get a hunting license and go into the woods, it is desirable to know the distinctive features of animals and birds.

Time of registration, the period and territory of validity

The legislation gives the competent authority 5 working days to consider the written appeal and make a decision.

As a rule, the result will be the receiving finish of the hunting ticket Federal unified sample.

And possible failure. Authorized structure shall have the right to give it in cases when a written request is incorrect, or the citizen does not meet the required criteria (there is a current conviction or no full capacity).

Receiving the ticket the person will be able to start Hiking up the game immediately, but only after the data on it will fall at the consultations the Belarusian delegation registry. This procedure is carried out by the issuing authority within one month after. He is obliged to inform ticket holders about the registration information, sending a corresponding notification.

Before the document was issued for 5 years. New procedure, valid as of 2017, was canceled this term and the citizen will not require the reissuance of the ticket.

The document provides for the right to hunt on the territory of any region of the country, regardless of what the settlement was issued.

In order to enter in the number of hunters, you will need a relatively small period and a written request, which can be easily completed and submitted for consideration.