Males are dark gray and black, as you would expect from a bird that has the word “sooty” in its name. Their tail feathers are black with a light gray band across the tips, much like the dusky grouse.

The sooty grouse usually occurs on the moist, coastal (western) side of our Western mountain ranges and coastlines and the dusky grouse mostly occupies the drier, interior (eastern) sides. Here is what you need to know about the sooty grouse.

Description and Life History of the Sooty Grouse

They also have bright yellow eyebrows that turn brighter during the breeding season. Unlike their dusky cousin, males raise the feathers on either side of their necks to reveal a bright yellow bare patch of skin accented by white downy feathers around it. Dusky grouse, in contrast, have red skin patches.

Starting in March, males establish territories and make deep hooting calls from the treetops to attract females, calls which can be heard up to 2 kilometers away (National Audubon Society 2018, Washington Department of Fish and Wildlife 2018). Males may also make short, fluttering flights between branches and land very loudly to attract females. When a female enters his territory and gets his attention, the male usually struts with his tail fanned and yellow throat patches on display (National Audubon Society 2018). After mating season ends, the males usually gather in coveys for the summer.

Meanwhile, the females scratch a depression into the ground and line it with conifer needles, twigs, leaves and feathers. They usually construct nest sites under some form of cover, such as a shrub, log, or a rocky outcrop. The female lays 5 to 10 eggs on average and incubates them by herself for 25 to 28 days (National Audubon Society 2018). When the chicks hatch, they can follow their mother to feed within a day and can fly in just over a week.

Adult sooty grouse forage on the ground throughout the spring and summer, primarily feeding on leaves, flowers, buds, berries, conifer needles and insects. However, the majority of a chick’s diet is insects (e.g., caterpillars, beetles, etc.) due to their high protein content (ADFG 2018; National Audubon Society 2018). In the winter, males also form coveys with hens and broods. They quickly transition to foraging in trees when deep snow blocks access to the ground. During this bleak time, they feed mostly on the buds and needles of Sitka spruce, hemlocks, firs, and pines (ADFG 2018; National Audubon Society 2018).

Female sooty grouse will aggressively defend their young by standing their ground and flapping their wings. However, raptors (e.g., goshawks, owls, etc.), martens, red squirrels, weasels, foxes, coyotes, bobcats, lynx, and even larger mammals may prey on the eggs, chicks, or adults throughout the year.

Range and Habitat of the Sooty Grouse

The sooty grouse has a narrow habitat range that primarily follows the Pacific Ocean coastline from California to Alaska, though some populations also extend through the Sierra Nevada Mountains. They are known to occur in California, Nevada, Oregon, Washington, and Alaska, as well as most of British Columbia.

The sooty grouse is usually considered a forest grouse species, but the coastal forests they inhabit are also very rugged and mountainous. Additionally, the habitat type changes from California up to Alaska. Throughout the spring and summer, they forage and nest in forest openings, clearcuts, alpine meadows, muskegs, and deciduous or coniferous forests from sea level to thousands of feet in elevation (ADFG 2018; All About Birds 2018; National Audubon Society 2018). However, they seasonally migrate in winter to dense, old-growth coniferous forests (e.g., spruce, fir, pine, etc.).

Conservation Issues for the Sooty Grouse

The sooty grouse population is generally globally secure; however, its range within the contiguous United States (excluding Alaska) is limited and populations may be vulnerable (NatureServe 2018). Sooty grouse populations decreased approximately 2 percent per year from 1966 to 2014, and the population trend continues to decline (All About Birds 2018). The global breeding population is estimated to be approximately 2 million birds, split roughly in half between the United States (47 percent) and Canada (53 percent) (All About Birds 2018; BirdLife International 2016).

The sooty grouse may be somewhat threatened by climate change, like the dusky grouse. Since this species also makes seasonal altitudinal migrations, a warming climate could affect how far they have to migrate, which could stress the birds. Logging activities often increase nesting and summer habitat for the species in the short term. However, as these forests age, they become unusable for the sooty grouse until they are mature or even at the old growth stage, up to a hundred years later. Cold and wet spring weather conditions may cause high mortality in chicks, which is common for many upland game birds (ADFG 2018). Due to their remote nature and rugged habitat preferences, hunting and human influence are unlikely to play a significant role in their mortality.

Hunting Opportunities for the Sooty Grouse

The sooty grouse is a trickster of a bird to hunt. One would assume that a loudly hooting bird would be easy to find, but that is not usually the case. Then there is the rugged and unforgiving nature of the slopes and coastal forests where they tend to live. Here are a few states where you can try your luck at hunting the sooty grouse.

If you can hunt them during the spring (i.e., in Alaska), you will usually find birds by their deep hooting calls. However, because males may make these calls from 100 feet up in a thick conifer tree, narrowing their location and actually finding them up in a tree can be a challenge. Many hunters find that these birds have a ventriloquist talent and seem to throw their calls from different directions, which makes it even harder to find them.

The second you think you know where they are, another call (coming from a completely different direction) changes your mind. Most spring sooty grouse hunters carry a .22 caliber rifle instead of a shotgun since you will likely have to shoot up into the top of a tall conifer tree instead of at a flushing bird.

In many places where you can only hunt them in the fall and early winter, walking along ridgelines and forest edges can be a great hunting technique. In addition, south-facing slopes may concentrate the birds more than any other aspect. Sooty grouse are usually most active on the ground foraging at dawn and dusk, which makes these the best times to encounter them on the ground. However, no matter how or where you hunt them, the sooty grouse is a very challenging bird to hunt with rewards that justify the work. 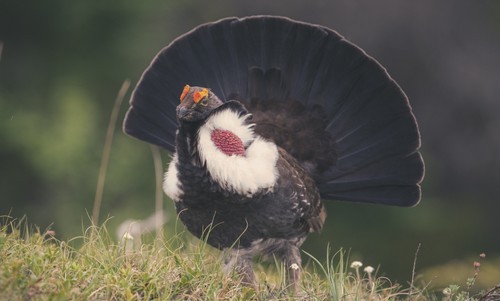 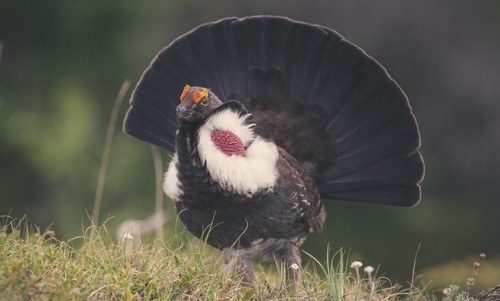