Crested tit has a couple of names – hohlushka or grenaderka. The bird belongs to the order of passerine birds. Found not only in wooded areas, but in the city. In addition to sparrows, pigeons, crows, woodpeckers and jays, urban residents began to accompany crested tit.

If this bird is known to practically every resident of the village, the townspeople simply do not understand and will not understand what bird lives in the city.

Places of distribution of a bird

Primarily a crested bird common in the southern lands of the Urals and the European part of the Russian Federation, and also occurs in the North from Arkhangelsk. Its boundaries stretch to the North and almost South-East of the land of Vyatka and of the Dvina. From Sverdlovsk and Ufa dwells in the forest area until Bashkiria.

From the Ukrainian Carpathians border habitat of the crested tit is carried out through the land of Poltava, Voronezh, Ulyanovsk and Penza. In winter and autumn season, the bird can fly and a little to the South. The bird inhabits and the territory in Central Europe and the Scandinavian Peninsula, but in southern countries, they rarely appear, and in Italy and the Balkan Peninsula, Tits do not exist. The bird is also not common in the Caucasus.

Bird of small size, has a gray-dark color, crest raised up. Because of the tufted titmouse called grenaderka because it looks like a hat. The tail, wings and back are greyish-brown color, visible marks quickly. There is a dark stripe that extends through the eye to the bend on the cheeks, like dark parentheses. The head is dark, and on throat there is a black spot.

The back stand of the base of the feathers, but the forehead is white, against this background, the crest is markedly different. Belly and head are white-dirty shades. If the crested tit is transferred to the stage of irritation, she pulled the neck and pressed the crest. Of the external characteristics of females and males have virtually no differences. And young has a crest and beard.

Has the following options:

Mostly Corydalis eat almost all insects, but their favorite food is the caterpillar of a small size, which can be found in coniferous trees and damage the crown of the barrel. If you keep a bird in involuntary terms, that food likely will be the problem, because this species requires a diet of live food.

The diet of the great tit includes the following invertebrates:

In the autumn-winter season it feeds on seeds and berries: cornelian cherry, juniper, fir, spruce, pine, hawthorn, Rowan and alder. In the spring prefer to drink the juice of the maple, birch and aspen.

Crested Tits build their nests mainly in coniferous forests types. For the location of the nest, grenaderka chooses a shallow well, which are among the roots of a large tree and in rotten stumps covered with low dense carpet of moss, but as their home still prefer hollows in trees. If the bird cannot find a similar refuge, it populated the abandoned dwellings, forty and white, sometimes in the nests of wild animals, and even can settle in the nest of a Wren. In the old trees and stumps with loose and rotten core, crested Tits make nests, remove the dust to the desired size of the hollow.

The flight hole of the hollow for grenaderka is approximately 3 cm in diameter. The bottom of the hollow equip mixed lichen and moss. For the arrangement of a tray used made of squirrel hair, but soft as it felt. On wool imposed cocoons of butterflies and cobwebs, but don’t always apply such materials.

Crested tit in contrast to the rest of the birds make little sounds.

Grenaderka incubate an average of 16 days, lay 5 to 7 eggs. Nest full clutch start hatching the first half of the month of may. The color of the egg shell is always changing, sometimes solid white color, without spots, and sometimes with spots on the blunt end similar to the Corolla and brownish-red spots. Their sizes range on average 1.6 x 1.4 cm. 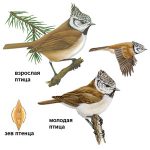 Born nestlings outside the nest in three weeks. The female feeds her Chicks only tracks, she seeks out prey in coniferous trees, pulling them from the trunk. Maternal feeding is stopped a few days before a solo flight of youngsters from dwelling.

Young crested tit can become on the wing about the middle of June.

The behavior of the crested tit

Behaviors grenaderka are the following points:

When winter comes, Tits, face big problems with finding food. During these colder months, the species of this bird does not goes through and eats whatever they get. To a temperature of – 15 Tits continue to search for insects, but as soon as the temperature begins to decline, Corydalis starting to agree on another feed. In these harsh conditions is necessary to help birds to survive the winter. But for this you should know the food need to give crested Tits, and what to avoid in order not to harm the bird.

Instead of larvae, in winter they love pumpkin seeds and watermelon raw and unsalted bacon. If you have a coconut, its shell will be a boon for crested Tits, just need to take the pieces and hung on a branch. If doves and sparrows prefer millet and pieces of bread, the birds will not be such to eat. Grenaderka can eat raw fine bones and lean meat, however, this option should be attributed to the extreme case, if nothing of the above feed.

In the frosty winter season as assistance is feeder. The delight and pleasure Tits no limits, they always visit a makeshift house. After a while the birds can eat even with human hands.

For the manufacture of the trough will need to follow this simple plan:

It is very important to protect the bird from cats. To do this you must hang a feeder away from the tree trunk, creating difficulties for access of cats to the trough. As obstacles approach the barbed wire, wound on a branch.

The influence of crested tit

The bird contributes to the coniferous forest that destroys harmful insects that destroy trees. Nature crested tit are considered to be true nurses and saviors of the forest. Even when the winter cold hurts grenaderka, it does not deviate from the food insects, if they do not exist, the Wren goes to feed grains. To hungry the crested bird to find its prey, it flies a lot of hours and inspects almost each tree for the presence of insect eggs and larvae.

In recent times, the population of crested Tits is rapidly decreased, it is due to poor forest areas that were exposed and subjected to cutting.