This is a powerful throwing weapon, suitable for hunting game birds.

The description of the weapon

Compound crossbow with the Lodge poliestireno type of high impact plastic. Coloring only camouflage, cover, rough, prone to peel. Bearing of shafts made of aluminum profile.

Despite the many cutouts of the Lodge, the crossbow is very heavy 4.2 kg. The ratio of mass to lethal force he is clearly losing the firearms. For example, IZH-18 12 gauge weighs 2.7 kilograms.

The crossbow is designed for sport shooting and hunting “for Peru.”

The design of the box allows the installation of a mechanical tensioner of the string.

Crossbow Packed in the box unmarked – just brown cardboard and all. The details laid out on branches from the cardboard strips.

The Assembly of the crossbow is made for the pictures from the instruction manual.

You can shoot only if the line of sight there are no people or Pets.

Crossbows “Archon” offered by the Internet shops at the price from 24 to 28 thousand rubles. Can something like this stuff, then the crossbow will cost mere pennies.

Next will be presented the reviews of the owners of block crossbow Archon from the Interloper. 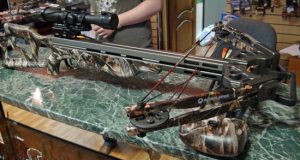 Ancient bows and arrows: the most interesting

3 Comments on “Crossbow Archon from Interloper”