Arrows are an integral part of the bow and the Archer. Before, during the campaigns of the armies of various countries, the archers of the different Nations carried a different number of arrows, usually set to 20 to 100 arrows.

For example, the Mongolian warriors, the Scythian and the Arab took up his ammunition with you, while the vast majority of archers in other countries had a much smaller number, leaving and keeping your main ammunition in the carts, with 20-50 arrows.

Arrowheads were made from different materials. They were bone (the barbarians 11-13 century), from wood of firm breeds (ancient Egypt), and later from solid steel or bronze. Most often it had the shape of a tree leaf, flat.

The plumage is not always present on the arrows of the time. Manufacturer good arrows required little material, but a lot of work, often this was done by the armourers, medieval archers are not often made arrows with their hands, whether they were camping or at home.

The speed of arrows released from a bow.

During the shot the arrow experiences a heavy load, and to withstand the acceleration was supposed to have very good flexibility. After the Archer pulling the string releases it, the arrow bends and then, in just a few seconds of flight it takes its original form while making the vibrational motion, for accurate firing, this factor is taken into account.

This had to do with arrows for bow Crossbow arrow had a much larger load when fired. So the ancient Greek crossbows 9th century BC was shooting arrows with a length of 40-60 cm with a metal tip with a force of string tension 90 kg.

When fired from this crossbow a flexible boom she just broke down, so they began to make short, more hard and thick is the main differences between the crossbow arrows from the arrows to the bow.

To save energy arrows at distances of about 100 meters during the conduct of the actual fighting, used heavy, slow-flying arrows. Arrow characteristics such loses much less energy, and hitting the target cause the expected damage.
For example, the weight of the sports, professional of the boom is 20 grams, the initial speed of the arrows of the bow is about 100 meters per second is 360 km/h, and the arrow will fly the prescribed distance, it has yet to penetrate the armor – clearly that an arrow weighing in at 20 grams. (and the weight of medieval combat arrows more than 150 gr.) can not cope with this task.

Modern, fast and easy, the boom is very quickly stopped by air resistance and at the end of its trajectory it will have the same speed and heavy.
Currently, there are more accurate data on flight speeds of arrows fired from different types of bows and crossbows.

Here is a sample data:

The trajectory of an arrow.

There is another very important point which is worth mentioning, is the trajectory of an arrow. To shoot a heavy arrow as far as possible, you need to shoot at a ballistic trajectory, in this case, the arrow will fly at altitude, parabola.

The essence of the following:

the arrow, having reached the maximum possible height under the action of gravity, and air resistance loses its flight speed to 0 km/hour, and then under the weight of the tip of the arrow tilts, begins to bite, and decreases with the speed.

Currently, sports arrow is released at a low angle to the horizon, flat trajectory (like a bullet), while having a huge initial speed of flight. But it is limited to a range of 100-150 meters.

Special attention should be given to the English archers. They were a bunch of 25-30 arrows, the rest of the stock was in the carts. The shaft of their arrows had a thickness of up to 12mm and length up to 90 cm.

At one end of the boom was the slot for the string, after which there was a tail. The plumage most often consisted of 3 goose feathers, as in goose feathers no flaws, length of the plumage was of the order of 25 cm for the stabilization of a significant tip.

This was due to the following reasons:

First, utulity tip prevents the arrow from breakage, often splitting, while hitting the target, so the arrow can be reused, and it was very important, as in the campaigns to find or make arrows is not so simple, as it needed special wood.

Secondly, if the opponent took out the arrow from the wound, the tip is often left in the wound.

Thirdly, it is much easier the transport of arrows. 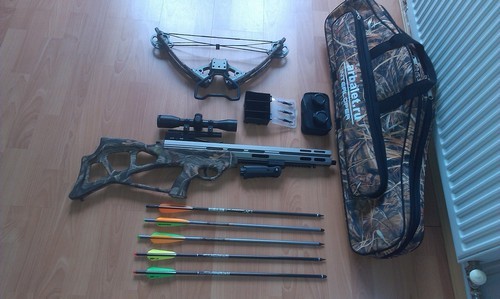 45 Comments on “Ancient bows and arrows: the most interesting”