Big water, a new reservoir and extreme weather conditions. The first training before the Adrenalin Open. We are best equipped as possible for us. Cutter small devices, let and budgetary, but they really act, a motor 9.8 mares and, of course, spinning Maximus, thanks to the EcoGroup office for assistance. 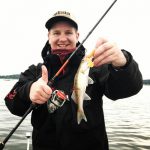 It took as much as 8 hours: friends, who are going to Ivanjkovci, it is not necessary to go through Dubna. There is a ferry, which is a very long time to get up. Not without embarrassment: the road has lost the number from the trailer flew off. Fortunately we still have normal people, man on the Gazelle for a long time we blinked.

Finally they arrived and put the boat on the base. The weather passed with the wind, rains and so on. Not wrong, you bastards. Start at the 4, and covers us from the wind and rain, which lasted all fishing. We still managed to draw a separate area of the pond where we plan to catch. Found interesting places. The fish were eating super disgusting biting off the tails, and just body bait. After bite, dolomite was impossible. I have been able to raise small pike-perch and ride a couple of decent fish on the Maximus Gravity.

Really enjoyed working with him on the big water. No wonder the crew Fell Selivanov-Fedorov chose these sticks. The second set was Maximus Advisor 24 7-35 test. I didn’t expect much, because adelka worth less than 5K. But I was surprised when I was able to distinguish for him the structure of the bottom and feel the fall of a weight on the bottom very clearly. Unique stick, the price tag of 7-8 rubles for it would be justified, and then 4…

Unfortunately, the 13th day weather defeated us: tired, drenched, and not happy until the end, we admitted our defeat and went to rest, hoping in the evening to return to the water. But by 16 o’clock has begun hurricane and thunderstorms. Pouring rain, under which the catch was impossible a priori. Thinking, weighing all decide to move home.

Very much has been unable to verify and to understand. The point is interesting, but not clear their “performance”. The tournament will show that we did something right or missed altogether. Experience, all experience. Invaluable experience! It was very interesting, thank you to my partner David. Will try in the tournament. Tackle take the same: Gravity 23 5-21 and Advizor 24 7-35. I have them going in tandem with Daiwa 12 legalis 2500 and cord Intech Exceed 0.8 and the Black Side Magnum 3000, which is wound on it, don’t remember. I refused to leash string in favor of flurocarbon Intech 0.55 and fittings.

Well well. Waiting for the competitions would be cool, task is to log in to 30KU.