Friendly and well-coordinated work of poachers has led to the fact that fish in ponds is becoming every year less and catch it even expensive gear is quite difficult. In spite of this, skilled fans to wander by the river or lake at dawn manages to return home with a catch. Fishing without a rod for them quite common, and gear are sometimes used as the most incredible and gimmicks. Knowledge about how to make a fishing trip successful, without having at hand the necessary equipment and not hurt anyone, because life is an unpredictable thing, and sometimes small fish may have an impact on someone’s life. Hiking is also useful to show off your skills and pull your bare hands out of the water glinting scales of a fish. 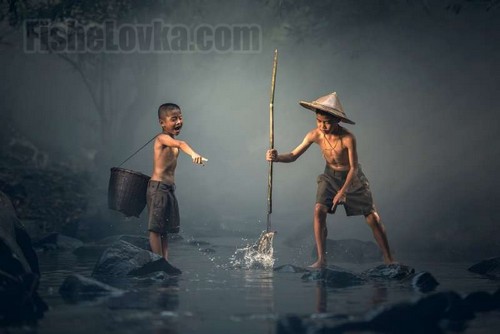 The most ancient method of fishing – a kind of spear

The first guns to catch fish, as evidenced by the discoveries of scientists, was an ordinary spear. To make them yourself is not difficult, the presence of a sharp knife or hatchet will facilitate the process. To catch fish without a rod need a smooth, thin tree. After removal of branches to be done at one end two perpendicular cut – get a kind of jail with four ends. They can be a little extra spice.

How to use a spear? The process is simple:

This catch is used when the reservoir is home to large fish – small fish pierce with a spear is very difficult, need long-term training. Even on a big catch to count not – the dexterity of aquatic life and the lack of experience may cause the lack of catch.

Experienced anglers know how to catch fish without any equipment and fishing rods. All that is required is a skillful dexterous hands, excellent response, and a reservoir with slow current and plenty of fish.

The easiest option to get hold of a good catch – walk along the coast, on which grow thick bushes and trees. Plant roots typically extend to the water, and between love to live aquatic creatures. Drove production to a standstill, will remain without much of a hassle to get her out of her comfort zone.

In the wild, you can use another method of fishing with bare hands. The main thing – the reservoir should not be very deep, with fairly turbid water. If well discern the bottom, not a problem, finally a few minutes in the place, you can quickly turn it into a muddy, opaque liquid.

Important! Muddy water makes it difficult to breath the inhabitants of the lake, and they try to climb closer to the surface to gasp clean air. To yawn it is not necessary, you need to immediately grab the unwary fish that seemed within reach. Caught, the instance is better out on the Bank and try to grab a few aquatic representatives of the family.

A plastic bottle is a great tool for catching

If there are no rods, and the fish you really want, you can use a plastic bottle with a capacity of 5 liters. To make a tackle a snap, cutting off the top part in place where capacity begins to narrow. In the bottle to put tasty bait (if you plan to hunt aquatic predator, it is better to put a small bait fish). A “watering pot” to insert into the container inside the neck. Tackle for catching aquatic life in nature are left to send it into the pond.

Important! Plastic bottle bad sinks to the bottom, so you can pre-sharp knife to make numerous small holes in the walls. A simpler way is to make two holes, pass the wire or thick thread and tie a weight (a stone or piece of metal).
The final step in preparing a plastic tackle – anchoring rope. It remains to throw a bottle to the river, definitely against the current. Tie the rope to the nearest tree. Homemade tackle to periodically check. When the capacity gets into a curious fish to pull the bottle over the rope, pick up the loot and send the trap back.

There is another way to use plastic bottles, not less effective. Usually it is used to catch carp of large size. Capacity to take greater, not less than five litres capacity.

Cut the bottle along, but only one side. In a container put a handful of worms, tied to the neck rope and attach it to a stick, which stick in the bottom of the pond or river. After a few hours in the bottle will sit a large carp. To get trapped it I can, because the perfect bait will serve the worms. To get out of the tank the fish will not work despite all efforts.

A simple trap for fish

Hard to believe, but you can get a good catch without gear, not even getting into the pond. How to catch fish without a rod, when under hand only a shovel? Nothing more is necessary, because everything you need to catch to dig a hole.

Pit is better to dig a metre from the river. Prokopov a little ditch, fill in your small pond of water. Expect water the inhabitants of the shoals there, rush, not worth it – you need a decoy.

As treats you can use:

If the bait to scatter in the evening, in the morning you can go catch in the pond will swim several representatives of the fish fauna. Near rivers with lots of fish for a long time to leave the trap is not necessary, as only a voracious predator or a curious carp will swim into the hole to block the output of a shovel and take out the coveted prey. Periodically adding the bait, you can go home with a full bucket coveted catch.

Fishing with empty hands, you can give the imagination, it’s so fun to compete with friends who will be able to get a larger copy, using improvised means. Words to describe the delight and excitement of such entertainment is not easy, it’s so wonderful when you have in your hands after much effort flutters and beats the longed-for prey!