The weather forecast for today passed quite deplorable, forecast said thunderstorms throughout the daylight hours. But today, we with Andrey Kulaevym planned a fishing trip with the boat. Despite promises of weather forecasters, still decided to go to the expanses of the Siberian river Tom.

Called Andrew at 9 am and at 10:30 were on the river. In a hurry I pumped up the boat, Packed the gear, started the engine and went to conquer the unexplored places of the mysterious river. Despite the forecast, pond greeted us with bright sunshine and a light breeze, accompanied by a small wave.

The area of the river Tom, in which we were, was not familiar to me, but still we managed to find a point that seemed in our opinion promising. At this point the terrain was pretty interesting, the difference in depths of 2 to 5 meters, and the shallow part of the flow was not, and at the depth it was, and quite strong.

Take the first exciting casts, then the second, fifth, bites no. Then Andrew performs a throw under the shore, and the release gets a powerful bite, toothy dragged a few meters, and the candle, it goes. I throw the same way under the shore just as the bait to catch the bottom, how am I going strike, strike, active fish, but pike goes near the boat.

After my descent, Andrew brings a small lace in the boat, which after photo sent to their native element. Further, the point is silent, but we have a guess where fish, so looking for similar places.

Find a small Creek with a depth of 1.5-2 meters, are places I love to sh lures, Megabass put mascot XS 80F, perform a throw, doing 2 small jerk and paused, and paused feeling a strong push, strike, feel the hook that is strong, but unfortunately again the gathering.

Throw closer to the grass, because of 2 transactions that get 2 “okologische”, the mood has risen.

At this time the companion had persuaded the pike to O. S. p. easy shiner lace 95mm and weighing about 400 grams, swallowed this bait very deep, and unfortunately, the pike let go failed. Do the conclusions that the fish are quite active and if she is on point, then bites occur on the first casts, so decide to search for places like this, and to sh in their 5-6 casts, and if no bites, go. 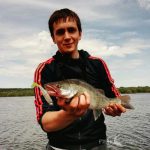 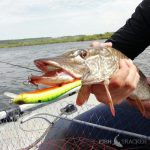 The following statement brought 2 more pike, but subsequent points were silent, it seemed that the biting as if turned off, change seats, cargo baits to the result does not, trying to find a fish in relief, but to no avail, have been on the old points, just silence. Find small bays with a depth of 3-4 meters, and finally, with the first transitions synchronously with a partner get on the pike, both lures Megabass easy shiner 95mm.

Make the next cast, a few turns of the coil, and a little slack, reel, feel that on the hook something substantial, but the resistance has not, and doesn’t want to emerge, but simply presses down, but still took mine, it was a perch about a pound, take pictures, and return home.

Moving on to the next point I changed the lure for Lunker city shaker 3.25, and on the first cast, feel the bite similar to perches, but there is another perch, with the same size as the previous one. Then Andrew pulls a pickerel and we are changing the place.

Next, we changed a few spots, caught a few small pike, and started to go home, thinking that soon she will be back on the river Tom.