The previous record was caught by Roy Groves and has been recently identified as a blue catfish by state officials. The voided record has opened the category back up giving anglers a good shot at being the next state record holder. 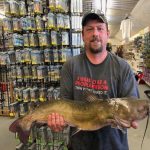 Now is the time to get your name in the record book! The South Dakota Game, Fish, and Parks recently voided the long-standing channel catfish state record. After years of speculation, the suspicious fish catch has been voided.

Grab a heavy-duty rod, whip up some stinkbait, and get to your favorite South Dakota honey hole, the record could be yours!

A short-lived state record. This channel cat weighed a little over 11 lbs and was caught from the Vermilion River.

“Ever since I started working for GFP, anglers have believed it was not a channel catfish, many of my colleagues have seen that picture and have quickly said that Mr. Groves’ fish is a blue catfish”

Roy Groves 55-pound catfish. Roy’s catch stood in the record books for 70 years before until it was recently voided.

The South Dakota Game and Fish has created a social media campaign they’re dubbing ‘Catrush 2019’ to help bring awareness and excitement to the pursuit of these whiskery beasts.

Opening the channel catfish category back up has allowed multiple South Dakotans to get their name penciled in the record books, even for just a short while. For now, the current record sits at 15 pounds four ounces.