Jun 20, finally opened season pike with the boat! Went to one of the bays of our reservoirs along with the Glory.

Wanted to test a new heavy kit up to 150 grams and larger lures. But the experience turned out not to the full traction coil and cord at that time have not brought. But I still tried.

Looking ahead, when the coil, cord and various Goodies came, I tested your set on one of the city reservoirs (who learned the learned do not need to tell everyone where it is).

But back on the reservoir. More time we spent fishing for Melaka. Was just curious to try. I used a 20 cm eel from Savage Gear is a huge offset on the hook 10/0.

I understand that the implementation of bites when the fishing will be very low, but there is a chance! And so it was. 6 outputs, 4 out of them were of average pike, a very spectacular fishing! The memory these hatchlings left me with cuts on the Ugra and memories in my head..

Glory tried duck Savage Gear 3D Fruck. She was also the outputs, but again, unfulfilled. He also tried to catch on more compact variety of silicone on the offset. Exits it had less, but some outlets also had a nice pike. Never caught from the grass a single copy. The pike on this day was clearly the aim.

But absolutely no catch us stay is not wanted and we decided in the end fishing will go to the deeper places, where they know that with high probability will catch the laces to the kilogram. And so it was.

At the same time decided to check kosagovskii crankbaits.

Put Megabass Flash 130 and the first wiring goes down the lace, but here goes. Amused, and gave us confidence. After a few casts a sure bite and the string under 700 grams huddled at the other end of the cord! Have reslover Wobbler and spinning Savage Gear Mpp2 to 150 grams, did not change it to a more suitable medium for such baits, I poizvraschatsya and pubicity storydate the lure of this powerful and long (259 cm) with a stick. And it worked! Of course, not as comfortable, but the spinning was created for even posting large swimbaits, not tugs, but if you want ticity difficult, but possible.

Speaking of swimbait, tried them in this fishing, but it is also necessary to give more time to better understand these baits. You need to be able to withstand the horizon and the place to find the right. Seen one way very hungry strap, which direct the boat adoval my forelka (SG 4D Ratle Trout Shad 17 cm.) until I shook them off her grass. 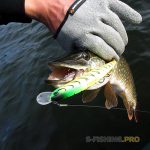 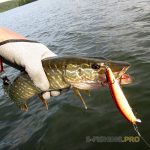 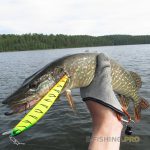 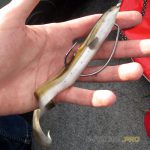 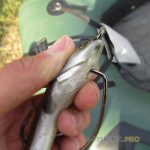 Then I again switched to crankbaits because time is short and there was no time to experiment particularly, I wanted to catch something. The depth was more than the place where I have been caught, and I decided to put the same Protank Flash 130 but pogruzheny special plates from the same company. With them, the lure slowly floats well, and therefore goes deeper. The bite was not long in coming, and pike already 900 grams beating on the hooks of a crankbait.

Speaking of hooks, they have the lure to three and taking a hand of pike, they try to grab the fingers. This time was a dangerous moment, but gloves Savage Gear Aqua Guard saved my hand.

She had laces that were heated. Buddy also caught pike on crankbaits, roslavlev new model, we finally left zero. Wouldn’t we Maleki caught would be more of these laces to the kilogram, but we want experimentation and new experiences. Well, the experience gained, had a fun time. Fishing was successful