In the process of picking fishing tackle is necessary to connect two fishing lines together. The angler need to know the basic node types and to use them properly. Before you tie the fishing line with fishing line, you need to determine the type of filament material, to find out their diameter. Then you can select the most durable and long-lasting node. 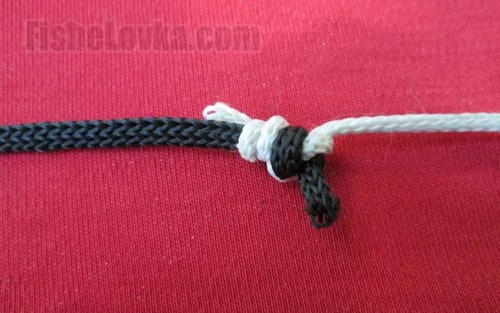 Possible binding sites of the woods

In the process of equipping a fishing rod angler, you have to tie knots to join two lines. There are different types of knots, from them it is important to learn at least a few technologies of knitting. The fact that they differ not only in sequence, nodules different retain the strength of the thread in the link. There are several places in the rod where you want to dock two pesochnyh fibers.

Leashes are made from very thin fishing line. Their goal is not to cause the fish’s suspicion, so the main material is a monoscaffold or fluorocarbon. Best proved the following nodes to associate potochnoi line.

The node with the fearsome name is one of the easiest. It is used when the monofilament is not much different in thickness (not more than twice). The connection is a good indicator of strength, a monoscaffold retains its properties in the range of 70-75%. “Bloody” has a compact size, making it freely glides through the choke ring. The knot can be used for joining yarns made from the same or different materials. How to tie the two ends of the fishing line knot “Bloody”?

Recommendation! The number of turns depends on the thickness of the line. If the monofil has a diameter of 0.30 mm, it is enough 4 times to wrap it around the other line. Thin fiber of a thickness of 0.15 mm wrapped 6 times.

A very effective connection is the knot called “Bloody back”. It is recommended for joining monofilaments with a thickness up to 0,40 mm. In this case, the strength reaches 90-95%.

Tip! When tightening the “bloody” nodes should alternately to pull-over long and short ends.

Nodes to connect the braids and monofil for a shock leader

Different characteristics have braided and nylon thread. Therefore, their connection, you need to choose a reliable knot. How to tie a fishing line made of nylon to the cord?

For the formation of the node with the name “Nail” will need tubule for a cocktail or rod of a ballpoint pen. Strength will be achieved in the range of 88-92%.

Node “Albright” is often used the master carp fishing for the connection of the cord with shock leader. The task of the connection to withstand power casting tooling. The sequence of actions looks like.

Attention! The thicker the leader, the more turns of the braid needs to be done.

Novice anglers often solve the thorny problem of how to reliably tie the fishing line on the line, which differ greatly in diameter, or have different structures. One option is getting a bundle called “Centauri”.

A distinctive feature of the node “Centaurus” is a high strength (90-100%) and ease of formation.

Fans enjoy match fishing sliding floats. An effective stopper on the basis of getting Slipknot. To make it simple enough.

For the formation of a sliding stopper is not for any scaffold. Monofilament thread can be immediately excluded from the list as fluorocarbon. They have minimal friction, in addition, the transparent nodule poorly visible in monofilament base. Optimally looks application balingasag cord, plain braids or wool yarn. When you select a node, you have to remember that this limiter should easily pass through the choke ring. The most popular sliding knot is the “Clinch”.

Fishing knots there are a large number, but even the professionals do not possess the tricks to their knitting. Enough to learn a few simple but effective options to securely connect two fishing lines.