By taste, coho salmon is not inferior to salmon and trout, while its cost is much less. Large fish are cut into steaks and fried, and the head and tail are left for the fish soup. You can separate the fillet into salting, leaving a little pulp on the ridge to cook the soup. 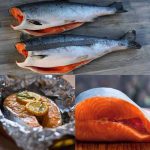 First cut off the head, moving under the gill bone. Be sure to remove the gills, as they give the broth a strong bitterness. Then the fin under the tail is removed and the costal bones are separated, making an incision along the spine. If the fish is large, it is recommended to hold the pulp with your hand through paper towels, otherwise you can get injured on sharp bones. Next, separate the fillet from the bones, not forgetting to leave some meat on the ridge for the fish soup. Large bones must be removed, and then peeled off the fillet.

For some reason, salmon species are usually salted or baked, but excellent soups are made from them. The coho salmon soup does not require many expensive products, because the fish itself is cheaper than trout and salmon. For stew, you can use as a whole fish, and only the tail or head. In the second case, the carcass remains to prepare another dish. Of course, it is better to cook fish soup on the banks of the river, although at home the soup also turns out to be tasty.

Ear should be served hot, sprinkled with chopped dill. Step-by-step preparation of fish soup takes no more than one hour.

Coho salmon soup on the stove

At home, a real ear will not work, because there will be no aroma of a fire. There is one secret, but about it a little later, you first need to decide on the ingredients.

There are many recipes for fish soups; the simplest one includes only available products: 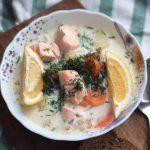 Cooking in any recipes with a photo begins with the stage of cutting fish. It’s more profitable to buy a whole fish and cut it into pieces that are needed. Remove the scales from the fish and be sure to remove the gills. They are a filter, therefore, negatively affect the taste of the soup. Do not immediately cut coho salmon into small pieces – it is better to do this later when the fish is cooked.

Secrets of a delicious dish

Pour coho salmon with cold water and put on fire, after boiling, remove the foam so that the broth does not cloud. While the fish is boiling, vegetables should be tackled. Rinse the potatoes, peel and cut into large cubes. Onions can be finely chopped with a knife, and carrots – grated or cut into circles.

Remove the finished red fish from the pan: strain the broth, and disassemble the meat into small pieces with your hands. Send chopped potatoes to the broth and cook for 20 minutes. When the potatoes are almost ready, add onions and carrots to the pan – cook for another 10 minutes. At the very end, pour semolina, salt, bay leaf and pepper. Boil for no more than 3-5 minutes, then return the fish to the soup and cook for 5 minutes.

You can add a real bonfire flavor to your ear at home by putting out a stick in soup. Suitable birch, alder or cherry, which should be set on fire and after a few seconds lower in the dish. Repeat 2-3 times and pour a glass of vodka into the pan – a real coho salmon soup is ready.