Ear can be prepared according to many recipes, however, only fresh tomatoes are added to Rostov. Thanks to them, the first dish has a beautiful color and piquant taste. 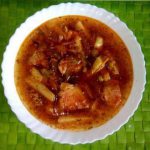 The main difference between Rostov fish soup and other fish soup is fresh tomatoes, which are part of it. In this case, cooking is done according to a recipe with a photo from Ilya Lazerson (a famous Russian chef, TV presenter, author of books on culinary art). He recommends boiling the ear in clay or enamel dishes, reducing the heat to a minimum. If everything is done correctly, then the fish broth should be transparent with a yellowish tinge.

Everyone should try the traditional Russian ear. Fish is cooked faster than meat, and is also better absorbed by the body. In addition, you can eat it even during fasting and diet. Rostov fish soup, the recipe of which is different from other fish dishes, will surprise with an interesting combination of products. The composition necessarily includes fresh tomatoes, potatoes, herbs and, of course, white fish.

In the warm spring in Rostov the All-Russian festival “The Great Rostov Ear” takes place. It is not difficult to guess that the holiday is dedicated specifically to fish soup, fishermen and just lovers of delicious food. Real Rostov fish soup is cooked in a large cauldron of thirty liters, and then fishing fans gathered from all over the country are tasting.

A fish caught in Lake Nero is suitable for the dish. They pay special attention to cooking, as they cook according to old recipes with a minimum set of ingredients. Not only tasting attracts people, because the festival is a festive program with excursions, contests and historical performances. It is recommended to visit the Rostov Kremlin, the Museum of the People’s Academy of fish soup and the Pike yard. You can bring souvenirs from the festival, as well as impressions, unique recipes and secrets of fishing.

As a general rule, set for soup products po- Rostowski always the same: fish, vegetables and a minimal amount of spices. You cannot use too many seasonings, otherwise the aroma of zander will be broken.

What you need to cook the dish:

For serving, you can use butter or ghee (optional), fresh herbs, and it is better to choose green onions, dill, parsley. The real Rostov fish soup is made from zander, but sometimes other marine species are added.

First you need to prepare the carcass of the pike perch: wash, cut off the head, remove the gills, clean the fish is optional. Immediately throw the head into boiling water, add coarsely chopped carrots, onions and potatoes. Gut the fish, cut along the ridge so that 2 halves are obtained. Cut the bones and send large bones with flesh to the pan, removing the fins. Separate the fillet from the skin, while the skin is also added to the broth. It will cook for about 10-15 minutes.

Cut the fillet into large pieces, put on the foil, and then grate with salt and sugar on both sides. Cut tomatoes, scald with boiling water and rinse under ice water to remove the skin. Cut them into 4-6 pieces depending on size. Get fish from the broth and add chopped tomatoes, as well as spices and salt. Rinse the pike perch (fillet), removing excess sugar and salt, send to the pan and cook for 5-7 minutes. Cut green onions, fill in the ear, cover and remove from heat.

Rostov fish soup is often served cold, but it is never cooked enough to last a few days. It is recommended to eat on the first day, otherwise the stew will not be so tasty. A plate of fresh tomato and greens is added to the plate, often complementing the first dish with a pie or fresh brown bread.