Living in any city in the world, you can continue to enjoy Japanese cuisine. At home, it is easy to cook soup with seaweed or cream, using the recipe with a photo. 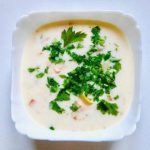 Many do not know any recipes from Japanese cuisine except sushi. In turn, she boasts other delicious food. Udon noodles, tempura, ramen – this is only part of a huge number of dishes. Japanese creamy salmon soup is as common as rolls, but it is rarely cooked at home. After looking at some wonderful recipes, you can make sure that there is nothing complicated in the preparation.

Not only in Finnish cuisine they combine red fish with cream, the Japanese also love experiments. It should be noted that they can easily do this, because the creamy soup turns out to be incredibly tasty, fragrant and tender. An easy-to-cook dish will not leave indifferent any member of the family.

what is needed for it from the ingredients:

Wash the soup set (trimmings, heads, tails), add cold water and put on fire. In the pan also send a whole onion and a little salt. Wait for boiling, then reduce the heat and cook under the lid for half an hour. Be sure to remove the foam, and after cooking strain the broth.

Pour the broth into a clean pan and return to the fire. Cut the carrots into slices, finely chop the leek, cut the potatoes into slices. Throw vegetables into the broth, salt and leave over medium heat for 20-25 minutes. Cut the salmon fillet into large pieces, toss to the finished vegetable, add heat to the maximum. Bring to a boil, pour cream and turn off the heat.

Finely chop the herbs and pour into the soup, add spices, and if necessary, more salt. Cover, cover with a few towels and leave for 20 minutes to make the dish more flavorful. Serve in a deep heel, garnishing with a sprig of dill.

The second option is considered more original and not everyone likes it, but it is just as tasty. Soy sauce, seaweed and rice are added to it – all this makes the first one not only hearty, but also interesting.

Creamy soup with salmon and rice cereal also consists of the following products:

Rice is washed first to clear water. Then pour it with cold clean water, leave for half an hour and only then put on low heat. It is worth noting that rice can not be poured into a container with liquid – it is transferred carefully with your hands.

A dish based on dry fish stock called Doshi is brewed. Cut the fillet into large pieces, pour two liters of water and put on fire, cook for 4 minutes. Put the red fish on a plate, and strain the broth through cheesecloth – it should be perfectly transparent. In this broth add fish and soy sauce to get Doshi, the soup with salmon and rice is ready, but it falls in a special way.

Algae arbitrarily tear with your hands into small pieces. Put rice in a small plate, then pieces of salmon and pour over the broth. Japanese salmon soup remains to decorate with herbs and serve. You do not need to salt it, because in the composition there are sauces and seaweed, which contains salt.

When organizing a Japanese dinner at home, you need to know the features of the kitchen.

There are several rules:

In Japan, the population monitors health, for this reason they eat rice, seafood and avoid fatty foods. It is worth paying attention to the calorie content of dishes – it is indicated in the table.