Starting in central Canada and stretching to the Gulf of Mexico, the Mississippi Flyway is the name given to the route followed by birds migrating from their breeding grounds in North America to their wintering grounds in the south.

Lacking in steep mountains or ridges that might block flight paths, the region contains spectacular forests, grasslands and wetlands offering  ideal conditions for large numbers of ducks, geese and migrating shorebirds. Nearly half of the bird species and up to 40% of the waterfowl of North America spend part of their lives in the Mississippi Flyway.

Layout Boat Hunting for Canvasbacks on the Mississippi River

As the name suggests, the Mississippi Flyway follows the route of the Mississippi River in the United States – North America’s largest river system. Originating in northern Minnesota, the slow-flowing river travels southwards for a distance of over 2,500 miles, cutting through, or forming a border for the states of Minnesota, Wisconsin, Iowa, Illinois, Missouri, Kentucky, Arkansas, Tennessee, Louisiana and Mississippi before emptying into the Mississippi River Delta at the Gulf of Mexico.

Fifteen areas are designated as closed or restricted use totaling about 44,500 acres located along the entire length of the refuge. This closed area system was established to provide waterfowl with a network of resting and feeding zones and to disperse waterfowl hunting opportunities. Crucial migratory habitat for Canvasbacks and other diving ducks exists along the Upper Mississippi River, which consists of beds of wild celery, sago pondweed, stiff arrowhead tubers, small clams along with other invertebrates.

The La Crosse District of the refuge encompasses Pools 7 and 8 of the Mississippi River with Pool 9 managed by the McGregor district.  These three areas host one of the biggest concentrations of Canvasbacks in North America – up to 400,000 birds in some years from the last week of October through the latter part of November. This is where I call home and where with my friends, we hunt the Canvasback. In my opinion, they have rightly earned the title as “King of Ducks” because of their grace, speed, stunning appearance, and unparalleled table qualities. 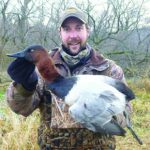 One of the fastest paced, exhilarating and effective ways to hunt the Canvasback and other “Divers” on the Mississippi River is from a layout boat. This style of hunting is a grand tradition with origins dating back to the market-hunting era. Much like the sink box gunners of old, the hunters conceal themselves by reclining inside anchored low-profile boats in deeper, open water amongst large spreads of decoys. This allows the hunter to be where ducks naturally gravitate as they flock to wide-open places to feed and rest. This behavior is reinforced by hunting pressure, as the birds quickly learn to avoid any patch of cover large enough to conceal hunters.

We use a traditional layout boat, which is ferried to the hunting area by a larger “tender boat”. Gunners take turns shooting from the layout and “manning” the tender boat, kept nearby to retrieve downed birds. When choosing a hunting locale, be aware of your state’s open water hunting laws. Wisconsin law, as it pertains to the Mississippi River, states all blinds (boats) must be securely anchored and located not more than 100 ft. from any shoreline including islands.

Decoys on long lines anchored on either end with heavy weights are deployed on the downwind side of the layout boat. This practice called “Long-lining” is a practical way to rig a large number of decoys when hunting Divers. We rig our decoys on two, 100 ft. lines with 3 dozen decoys per line spaced 2 – 3 ft. apart.

The decoys we utilize are Canvasback, Goldeneye, Bluebill and Bufflehead each equipped with a dropper line, which attaches to the long line with clips. This allows the decoys to move freely while floating above the long line. These strings of decoys act like a pipeline as often times, divers will follow the pipeline right into the waiting gunner. For added realism and concealment, an additional 4 dozen, traditionally rigged Can decoys, are positioned around the layout boat.

Settle in so you can just see over the bow without straining your neck. This way, you can watch for incomers and be ready to shoot. Sit up only when ducks are in range and be sure you can rotate your body from the hips to swing on passing birds. They often appear out of nowhere, skimming low above the water. Observing a flock of Canvasbacks screaming towards you at eye level is a remarkable sight and the following scenario is one that all waterfowlers should experience. Swinging once over the decoys, the flock turns into the wind, wings cupped, feet splayed, rocking back and forth as they stall preparing to drop into the decoys.

You pick out the lead bull Can with his black chest and Auburn head contrasting sharply with his snow-white belly. You sit up, swing and fire, as the flock lifts up and turns on the speed. It takes practice to hit ducks from a sitting position in a bobbing boat but if you wait to shoot until they are almost ready to land, you will have relatively close range shots. After you do shoot, the rest of the flock will usually swing wide and go downwind, often times offering one last chance.

If you are fortunate enough to knock one down, but don’t see legs kicking weakly skyward, be prepared to react quickly. The thing about Divers is – they dive and unless mortally wounded or have broken legs, they elude hunters very well. If a diving duck pops its head up after hitting the water, shoot it again – immediately. If it starts diving, pursue it in the Tender boat until you can safely and legally dispatch it. Exhaust every available legal effort to finish the job.

When you do successfully harvest a Canvasback or other Diver, there are a few key points to keep in mind as often times these get bad reviews on the table. That’s a shame in my opinion because most taste great if you treat the meat correctly. In fact, canvasbacks might be the best-tasting duck on the planet. First, keep your ducks cool. Second, make sure to remove bloodshot areas from the meat then soak the meat in salted water in the fridge, changing often, to draw out more blood. Most important, remove all fat from the meat (unless you’re roasting a plucked canvasback) as even a small amount can add an unpleasant flavor. Then, cook them hot and fast to no more than medium rare.

It’s a common site to observe thousands of Canvasbacks and other divers rafted offshore as waterfowl frequently gather in great numbers in open-water habitats. Traditionally, these areas have been difficult if not impossible to hunt. By providing effective concealment, layout boats open up a wealth of productive new hunting territory for waterfowlers.  Hunting the Upper Mississippi River is definitely a world-class hunting destination and is rated in the top ten waterfowl hunting destinations in all of North America by Ducks Unlimited. Every waterfowler should experience a layout boat hunt on these famed waters at least once in their hunting career so they too can target what old-time hunters revere as the King of Ducks, the noble Canvasback.

Brian Schumacher is a lifelong resident of the Minnesota Driftless Area and is an avid outdoorsman and ardent fly angler. His passion for fly fishing has taken him along with his wife and fellow fly fishing enthusiast, Janet Veit, to the streams of the high Sierra Nevada range in California to the Connecticut and Androscoggin Rivers in New Hampshire and many destinations in between. Brian is a fly fishing guide in southeastern Minnesota for The Driftless Fly Fishing Company in Preston, Minnesota, “The Trout Capital of Minnesota.” Go to: www.minnesotaflyfishing.com for more information. When a fly rod is not in hand, a shotgun will be accompanying Brian afield hunting turkey, deer, upland birds and waterfowl. Be it chasing puddlers and divers on his “home waters” of the famed Mississippi River to Eider, Scoter and Swans on the East Coast, a blind is where you will find him from September to December. 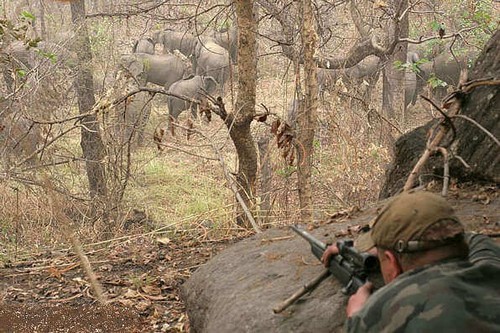