One day I hunted a huge semitones of an elephant that was destroying crops in the entire valley. Seeing the huge mark he left on soft ground, I whistled in surprise. With the Winchester in his left hand I made my way to the high bushes right behind the Rangers, who were on a huge delay.

The morning dew evaporated under the warm rays of the sun, and in the woods it was already stuffy. We soon came to a small river, the water which overflowed and formed a swamp. The mass traces talked about the fact that the animal stayed here too long, to quench their thirst. Elephant somewhere near. Now we’ve gone even more caution. In a minute we have a swampy puddle, narrow but deep, in which the animal apparently navellos in pleasure. The vegetation around was splattered black with the unpleasant smell of mud. At the end of the swamp clearing continued, calling the hunter to the further search.

Bushes, thorny creepers tore our body, blocked the road; the leaves, which have left the dirt from the sides of an elephant, stuck to our scratched skin. We walked barely, leaning forward, stumbling over the treacherous roots, and, barely escaping, again immersed in a viscous soil, which exhale putrid fumes. At this time, behind our backs there was a roar, as if the forest exploded and the ground started to shake. The elephant is a clever maneuver, carefully, silently, back to its former track.

He felt the smell of people and went after them. In this area him have nothing to fear. Running through the thickets for him, nothing. I have crawled on their bellies in the tight tunnel that clenched me on both sides, deprived of the opportunity to straighten up and get off the path of death: vines, branches, roots and swamp me paralyzed.

With a gun under the other, all exhausted and distraught from fear and the consciousness that the elephant could at any moment crush me, I consoled myself with naive hope that the animal will pass by and not notice me, and rush for the two trackers, who, of course, already out of danger and hide somewhere on a high tree. The elephant stopped in the middle of dense bushes, his back leg was almost two meters away from me. A minute checking the area, he breathed in the surrounding air trunk, which had caught the hated scent of man, and immediately he felt angry.

Huge, similar to the pillars of the legs began to rise and fall, like hammers, like he wanted to turn his victim into a mess. At the same time the trunk he began to pull up trees and bushes, knocking them far to the side, so he cleared the area. I tried to dive as deep as possible in the dirt. I was dying from terror, imagining that the Bishop can get me out of it with the surrounding bushes. Do not take more than two seconds, as I feel I lift up together with tangled vegetation in which I took refuge.

At this point, vines, thorns, bushes and branches cracked, and I found myself on the bare ground, absolutely no protection. On the Bush under which I was hiding, leaving only my hat. The elephant instantly felt a new smell. Desperate pipes, he pulled out a Bush and began to trample him. He kicked the ground at an incredible pace for such a huge animal. Sometimes he bore the weight of the rear, then front legs, and this increased the area of manufactured destruction. With horror, seeing the approaching four giant post, I almost cried from despair and impotence: indeed, my Winchester lying beneath me. Would be enough, one bullet, and would be an end to this humiliating drama!

Huge feet stopped hitting the ground, and an elongated trunk began to look for something in the trampled vegetation. The elephant raised his head and turned to me. I only shrank from the horror. Now very close, I saw full of hostile red eyes and a knobby, wrinkled forehead. The elephant calmed down and began to rebound. He pulled the trunk a moment hesitated and went right to my shelter. As if hypnotized, I stared straight at the two dark round hole at the end of the trunk, two of his growth, similar to the thumb and fingers. I desperately realized that a few seconds of me left a bloody mess. Better to die standing with a gun in his hand.

There are a few meters to the left I hear a crackling sound, apparently fell to the ground overripe fruit or broke off a dry branch. Elephant, destroying everything in its path, instantly rushes in that direction, thinking it must be that there is hidden enemy. However, he touches me with their feet. But I’m not expecting to make it out of the dirt and rush away in all haste. Enraged, the giant continued furiously, already seeing nothing, to destroy and trample all around.

Panting and wet, I reached a small river, which we crossed at the beginning of our track. Gun, ammo, a lighter and cigarettes I put the tree trunk, and he was, in clothes and jumped into the water and washed off the thick layer of dirt that covered me from head to toe.
Then I cleaned out a clogged hard drive, ripped the handkerchief has wrapped on the rod and once again walked them down the barrel of a gun. All of this gradually calmed me down and returned the balance, badly shaken experienced danger. I took out the wet cigarette case and lit a cigarette. Life seems more beautiful when you looked death in the eye” 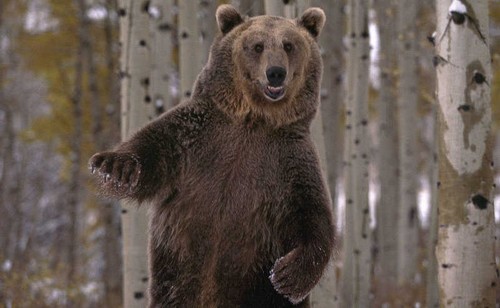