Time regains standard pace with my muttering a few choice words as the group sails hundreds of feet below us and around a point. I’m disgusted by the blemish on this perfect moment. But it’s something I’ve become painfully accustomed to this season.

Rio the setter is holding just below a lip of pitted volcanic stone a few paces up this 60 degree slope. We’ve climbed for over two hours to get to this point. The entire trek from the bottom the dogs have been trailing and repositioning. I can tell by Rio’s stature that she has trapped birds that have outrun us all the way uphill. She refuses to even sneak a glance my direction or acknowledge the young lab, Ida, beginning to close in on her find. I’m able to reset my feet on nearly level ground and catch a few deep breaths as Ida moves in to flush.

A large covey of Chukar launches off the lab’s nose and begins to glide down the slope from right to left. For anyone else watching it all must appear a blur, a span of maybe three seconds. But for me these moments are as slow as time has gotten this season. Seeing every wingbeat in the vivid detail of elastic time, I pick a big bird and bring the bead to meet the dark mask expecting the fold on the snap of the trigger. But this red-leg never flinches. I follow with the second barrel again with no effect.

I’ve always been a streaky shooter. Doesn’t really matter how much practice or repetition, I’m either hot or cold. Normally the streaks come and go without much warning or fanfare. I opened last season as deadly as I’ve ever been. The shotgun felt weightless and swung in a harmony with flushing birds that would fall as if by another’s hand. For much of the year, with a few breaks, that magic was uninterrupted.

During the summer months of training and shooting the hot streak continued, testing gear and breaking clays with good effect. Between shooting with friends, instructing and training with the new puppy the amount of off-season powder burnt was exponentially higher than most years. I started to believe that I’d finally broken through, ended the streakiness, become a shooter.

But I will always remember the start of this year as the season the broad side of the barn wasn’t even big enough.

No matter whether it was five yards or 50, straight away, straight up, quartering….. birds would not drop. I was seeing flushes well, picking out individuals, the gun mount felt the same as it always had. Yet no feathers could be cut. It was as if the birds were pulling Matrix moves and flying between shot. No matter the terrain, open mountains to dense woods, no matter how fair or foul the weather, there were no conditions that could cure this malady.

I’m already somewhat superstitious. So, when a piss-poor shooting string like this happens I start wondering which crack I stepped on, or which undisclosed rule I’ve broken to anger the bird gods to a level of disdain that they’ve chosen to armor plate all birds in my path.

This kicks off iterations of exorcism that truly start sounding insane. During hot streaks I don’t clean my gun because I don’t want to wash any good mojo off of it. But when a streak this cold arrives I break it down to the elements, clean everything.

I started shuffling choke tubes with ADHD fervor. No effect.

I switched ammo from favorite shells to alternate brands and loads…… three times. This is ill-advised during the midst of a hunting trip but desperation calls for extreme measures. No effect. At the conclusion of the trip I took this rainbow of shells and a stack of paper plates, measured out different distances and began shooting them with each load and each choke. Then I hired child labor to count the number of holes in each plate – easiest $20 my niece ever made. She’s likely hoping there are more cold streaks in the future. It’s not like I haven’t patterned this shotgun before but I’m at the end of my rope.

It’s not the gun or the ammo, though I elect to tighten chokes from my standard setup in order to make it more difficult for armored birds.

Then I start thinking my eyes are failing me. Am I actually seeing birds differently? I start closing alternating eyes, trying to read road signs at different distances while driving. I manage to convince myself that there’s pressure building up in my eyeball and there is potential for complete blindness at any minute. I start raining drops into eyes trying to prevent the coming darkness.

There’s no resulting bird lethality but at least my eyelids feel super slick from four different kinds of eyedrops.

I order new shooting glasses just in case the microscopic scratches on this used pair are distorting my view. Of course that’s not it either.

Obviously the forces at work here are strong. I’ve been hexed. I’ve angered someone with a story about tailgate photos or talk of Federal Upland Stamps to the point that they purchased a lock of my hair from the barber and made a voodoo doll. Then they stuck that doll’s tiny shotgun in his ass. And there’s nothing I can do about it. The chicken blood I need to break such a curse would require me to kill a bird and I apparently will never shoot another one again. I’m officially cutting my own hair from now on. 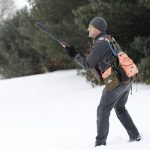 I’m resigned to my fate as a birder and vegan once my freezer runs dry. I’ll keep carrying a shotgun to give the dogs a pittance of hope.

This streak has been trying. But it isn’t the result of equipment malfunction or even some witch. It’s my own preaching. My sermons always conclude with finding success in the hunt beyond the heft of the game bag. Now that’s come full circle, testing my own faith. But I believe. No streak will convince me that this upland pursuit is dependent on killing birds. The hundreds of miles covered with horrible shooting hasn’t weakened that resolve.

Maybe all it takes is that acknowledgement.

The birds begin dropping again. Hopefully these shots will set off a new era of shooting success. Because honestly the idea of becoming a vegan wasn’t very appealing.