Bird in flight as the target has a special property that makes the technique of shooting it very different from shooting ground moving targets.

One of the best techniques to overcome these difficulties of shooting a bird in flight is a hunting technique of shooting offhand. When shooting offhand eyes and hands learn to act simultaneously and under: eyes look for where the target is, where and how fast it moves, arm raises the rifle so that the sheaf flying pellets and flying bird was found at a certain point in space.

Clicking on the drop is made instantly at the time of pressing of the butt to the shoulder.

These properties are the following:

How to achieve a good shooting offhand as soon as possible?

First of all, you must absolutely get comfortable with the gun and for it to engage the room (home) exercise and to learn the fundamentals of “discounted” at a stationary target without firing a shot: the right front, slow, then fast and accurate rifle is raised to the shoulder, fast and accelerated all vysalivanie and proper trigger pull. Training should be conducted at stationary targets in the form pasted on the glass of the wads or silhouettes of flying ducks, snipe, snipe, snipe, etc. “live targets.” The window is glued, for example, six blackened wads: two above eye level, two – level and two below. Wads in each pair are arranged one above the other, at a distance of about 0.5 m from each other.

Discount first made only on the Central pair of wads, slowly, with all the rules concerning the position of body, arms, legs and strain their muscles. 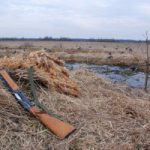 Will be very good if the head – entry of gunslinger – will watch from the sidelines and noting the mistakes trainees, to give him instructions.

When all movements are performed slowly without a single error, a discounted rate can be increased.

Achieving a correct and quick discounted when vysalivanie in the horizontal plane, the hunter can go to the discount at the upper and lower pairs of wads.

After indoor training on a stationary target, which it is advisable to do for 2 weeks 2 times a day, go to the training room on the moving chain. As for hunting, there are often cases when you need a second shot, the hunter needs to practice on the doubles. For this, raising his gun for one purpose (wad), should then quickly move fly to another wad, is placed some way away and definitely a little above or below the first. Must learn to translate the front sight from left to right and Vice versa.

The most simple device for training at a moving target is a cargo – bullet 12-gauge or plummet suspended from the ceiling with thick string.

Plummet, depending on the background of the room, may be either blackened or whitewashed (wrapped in a rag or paper). She or swinging like a pendulum, or describes a circle at a constant distance from the floor, or has mixed movement, reminiscent of a pie, but with the rise at the ends (on the bloat). You can throw up in an arc of a hat, etc. In this home workout is regularity. Throw up a gun should be a series of 12-15 skydock and then make a break for 1-2 minutes. All of these episodes is enough to make a 7-10, that is only from 84 to 150 skydock in the morning or evening. Better, of course, to train both in the morning and evening.

Pulling the trigger can only be invested in the pre-chamber a spent shell casing, otherwise such a practice detrimental impact on the mechanism of the gun.

More experienced hands may be limited to one pressing the trigger when the uncocked trigger.

Field training is expressed in trap shooting Skeet, manufactured in various directions, and also over the shooter’s head from a high tower in imitation of shooting duck flights. It is also desirable to conduct a training session in Skeet shooting among the bushes, between which is laid a track for the shooter.

Prior home (room) and field training is the basis of good shooting is hunting. This truth should be remembered every hunter.

For shooting birds in flight, in addition to great skill, acquired by habit to his gun, the title of his bout and regular exercise are also necessary habit right the first time to determine the distance.

Every hunter who seeks to become a good shot and shoot offhand, should whenever possible have a shotgun that is appropriate for the weight, prekladatele in size and with a good balance, that is well balanced; with an awkward, inappropriate gun to learn shooting offhand, of course, extremely difficult.

If too heavy trunks or tight descents even prekladatele the gun will hit too low, and when a disproportionately light guns it will improve.

To acquire skills in determining the exact distances you need to measure your step length and systematically practice in determining distances to the eye in any convenient cases. Hunting in particular is very useful with a good shot to approach the dead game, pre-determining distance by eye and then checking it against the steps. Types and methods of rifle hunting in Peru is a very diverse and produced all four seasons, and feather hunting in the winter is very limited. A hunter must learn first the basic ways of gun hunting on the most common types of birds. Thus it is necessary to use a case to shoot it in flight, avoiding shots on sedentary birds.

Hunting experience has shown that when firing a shot, to be sure to kill the game immediately (or to deprive of its ability of motion), for medium-sized game at normal hunting distances and with a corresponding number of shot required at least 5 pellets.

Getting 4 or 3 pellets will give a significant probability of severe injuries of the game, much of which will fall into the hands of the hunter; the smaller the number of hits you’ll see a large percentage of the female game and the dominance of the wounded as well as taken game.

Each hunter must shoot at a bird vdet offhand only at an accessible distance. This distance is an average shooter will be no more than 25-30 m, for very good arrow – no more than 35-40 m, since longer distance even when shooting buckshot, preferably the exact vysalivanie (of course fast).

The ultimate goal of a hunter is to get into the game a sheaf of shot and take her purely, without making the wounded animal.

If you have to shoot a bird flying across the plane of firing or at an angle to the line of firing, such firing should be conducted with so-called “preemption” (the removal of the aiming point ahead of the game or “taking forward” fly on the flight line, depending on the distance and speed of flight game.

The hunter, using the length of the bird as scale or on the basis of visibility of the birds (the clear eye its shape and plumage), mentally amerivet desired value of pre-emption on the flight line of the bird and makes a quick swipe with the end of the gun in this direction.

The velocity scale is such that the aiming point located in the imaginary vertical plane in which lies the line of flight bird moves rather than vytselivaya bird.

Fly like a bird surpasses without any delay for a certain distance, that is, the anticipation – and then the hunter, pressing the descent continues to move the fly with the same speed.

As soon as the bird get to the point on the value of the right lead, you should immediately make a shot. It is clear that pre-emption or taking the gun forward along the line of flight must be the more than likely the bird flies. If the bird is flying perpendicular to the direction of the shot, the amount of convictions decreases. For example, if the game is flying the hunter or at an angle of 45° to the line of the shot (45° – 1/8 of a circle), the pre-emption equal to 0.7 of the lead with a cross shot. And at an angle of 22° preemption is 0.4 from the usual (A. A. Zernov).

Professor S. A. Buturlin says that you consider necessary ahead of the game in various ways: “we need to learn to either throw up a gun directly at the point where the game needs to meet with the shell, or toss the gun to the game and then a short quick movement to get in front of it and shoot without delay.” It is clear that the different directions of the game and different distances, changing the point of impact. Hunting shooting entry needs to be widely practiced. Hunting waterfowl, marsh, forest, field and steppe game contain a rich variety of ways of hunting, of which have a full opportunity to choose the most efficient methods that contain, in addition to elements rapid fire entry, and a number of other skills.