Roosting spring gobblers is how I and other hunting professionals consistently kill turkeys on camera. We record awesome roost footage, locate the why, where and how to set up. I utilize some aggressive tactics that often draw criticism. But they are extremely successful so I plan to keep on aggressively yelping.

Many hunters probably have heard the expression, “roosted ain’t roasted.” I have always disagreed with this because roosted for me usually does mean a roasted turkey.

I am not talking old-school roosting––standing in a road ditch right at dark and owl hooting, all excited to hear a gobble a quarter mile away.

I am talking about what many call “radical roosting.” When I roost with someone new, my tactics freak them out. I use a turkey call with aggressive yelping and cutting. I absolutely love to roost birds with hen yelps rather than an owl hooter or crow call.

I’ve turkey called during scouting and roosting sessions for more than 30 years. It really works and the calling doesn’t negatively affect turkeys at all. Calling does, however, provoke them to react. And turkeys react to a turkey call when I scout and roost way better than they do to an owl call or a crow call. They respond to my calling and I find them. I see how they react to the call, and I know which way they’ll go come morning. I also achieve a pretty accurate gobbler count.

I locate how many gobblers are on the farm I’m hunting simply by using cutting right at dark, right at roost time or early in the morning at daylight. Later in the morning I’ll move and call, not spooking turkeys; not putting pressure on turkeys, just using turkey vocalization. I make sounds that turkeys react to, and it doesn’t shut turkeys down. 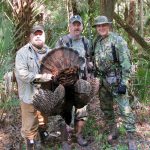 Using your turkey call for scouting and roosting makes you a much better turkey hunter. You will know what turkeys are doing, what time they do it and their direction of travel. You can learn all of this by just calling, watching, and listening.

Of the hundreds of examples I have of scouting and roosting with a turkey call, I will tell you of three, one each in New England, Missouri and South Dakota’s Black Hills.

Toward the end of my whirlwind turkey hunting marathon, we usually finish up in New England around June 1. Roosting is also a camp tradition in most of my out -of-state hunts, especially in New England where we’ve done it for over 25 years. The result, more often than not, is a dead turkey.

Upon my arrival I’m greeted by pessimism. “It’s over,” my eastern friends say. “All the turkeys are call shy.”

With limited time to complete a TV show I must rely on what always works for me: calling and roosting.

I arrive in Massachusetts Sunday morning and the season opens Monday. Late Sunday afternoon, we drive dirt roads in our hunting areas, stop and call, move on, stop and call until we locate gobbling turkeys. I reach several responsive gobblers with my turkey call right before dark. I follow them to roost, find my setup for the next morning, and we kill the bird on camera early. And that is how it works for me with limited time to make it happen.

I have a media hunt scheduled on Monday morning and arrive into camp late Saturday night. I have never seen the property, so now calling becomes even more important to my success.

First, I review a topo map of the farm. I quickly eliminate open pastures, and then zero in on a creek bottom with crop fields and big timbered ridges. Next, I ask the landowner where he sees and hears turkeys.

Early Sunday morning I sit back from the creek bottom fields and ridges and listen, documenting all on my video camera. After locating roost and fly-down locations, I carefully move closer and call to get a gobbler count and direction of travel from their roost. I hang out until around 10 a.m., watching, calling and listening.

I return that afternoon and videotape turkeys in the creek bottom crop fields until they head to the roost. I follow and choose where I want to be set up in the morning. I return to camp for dinner, organize my gear then return to the farm way after dark and quietly set up my blind just inside the field edge between the roosted gobblers and the field. I choose this location after my extensive but brief calling and scouting report.

My blind setup covers two directions. The back of the blind overlooks creek bottom timber and the roost area; front of blind covers a corner of the field. This is where I observed a gobbler enter the field at daylight; he left the same way at dark.

I’ve set up the blind for several reasons. One, the woods are extremely open in this open field country in northern Missouri. Second, I have four people, and two video cameras to conceal.

Early the next morning we quietly set up in the blind about an hour before first light. Showtime at daylight is amazing, I capture gobblers on the roost, flying down, flying across a creek. Finally a tom marches to us for an awesome, on-camera kill.

Worth noting: This worked so well because we were in the zone, tight with the turkeys where calling is so much more effective than it is from a distance.

I honestly have roosted turkeys in 43 states and Mexico, all with great success, and often on the sly. Some outfitters and hunters claim roosting doesn’t work in their hunting area.

Roosting tactics can vary, depending on the region and terrain features. Watching turkeys from a distance in open country then following them to the roost and choosing the set up the night before works well. In more timbered areas, I like to start fairly early, especially if I just arrived from out of town and have no knowledge of the local turkeys.

This is when I really get on my turkey call to start a gobbler before dark, keep him going as he goes to roost with me close behind. I now know his route to the roost. I don’t just find his tree; I want to know the limb he is on for my morning hunt.

Locate the spot he pitched up from and be set up on that spot with him still in the tree the next morning. He probably flew up from that side because it offered easy access to the roost. He likely will pitch back down to that same spot the next morning. I believe it helps if he thinks the girls are there waiting for him.

During a television shoot with “Turkey Revolution” in the Black Hills, roosting greatly helped us complete the show. It was cold. Wind brought snow and sleet and most hunters stayed in camp that evening and remained there the next morning.

Upon arrival and despite the blowing snow we drive into the hills to check out our hunting area and locate turkeys for the next morning’s hunt. We finally located a big flock with multiple strutters in a low valley canyon a bit out of the wind between huge hills.

We watch the turkeys until dark and as they drift to the south and move up on a pine-covered ridge. I follow. Once the birds fly up, they gobble nonstop to my cutting and yelping-despite the howling wind.

After dark we return to the canyon where the gobblers were strutting and set up two blinds on an elevated pond dam overlooking the valley and just below the roost. The next morning the wind continues to blow snow, but our aggressive calling lights up the roost. Before long several flocks are out in front of us, groups of hens, a group of pushy lesser toms, and just to our right six big toms strutting with the girls.

We achieve two on-camera kills and a completed television show despite terrible weather. It is all due to roosting with calling and setting up tight to the roost.

As you get ready to hit the woods, try hard to roost your birds. As the season finally arrives, listen in the late evening to locate where they roost and then roost them the evening prior to hunting. In open country, watching turkeys and following them to roost works extremely well. All of this will help you to kill gobblers regardless of the weather, time of year or people pressure.