Spiders – one of the oldest land animals on our planet have sprung from kremoobraznogo ancestor. Now a squad of spiders includes more than forty thousand various types.

The black widow belongs to the class of arachnids, a squad of spiders, is a representative of the genus Latrodectus venom of these spiders are deadly to animals and humans.

The habitat of the black widow

The habitat of the Latrodectus includes the territories of tropical Africa, Central and Western Asia and southern Europe. In our country these spiders live in the Caucasus, the Crimea, in the South Urals, but in recent times their range has expanded northward. They meet in the Moscow region, in Rostov-on-don, Orel. The black widow likes to settle on the wastelands in the ravines, on the banks of ponds.
The structure karakurt 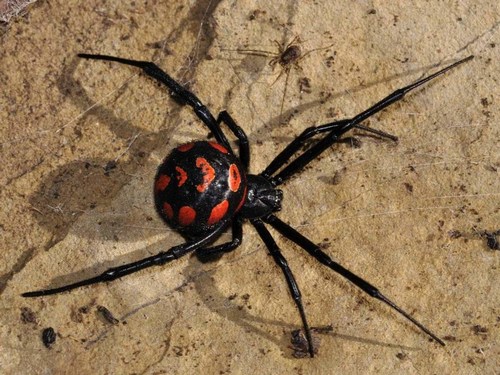 The structure karakurt does not differ from structure of other spiders. His body is divided into two sections: front Department of the trunk, with four pairs of eyes, covered with a hard chitinous shield. The second section is the abdomen, which is covered with an elastic sheath. Spider glands are located in this section of body. On the head part of the trunk has two pairs of modified limbs – the chelicerae and pedipalpy, behind which are walking legs. Their spiders have eight.

The chelicerae consist of one extremity at the end of which is a claw, with poison gland. They are designed for grasping and holding prey and for protection from enemies.

Pedipalpy like legs, but shorter. They are the organ of touch, movement usually do not participate. In Mature males. They are somewhat modified. 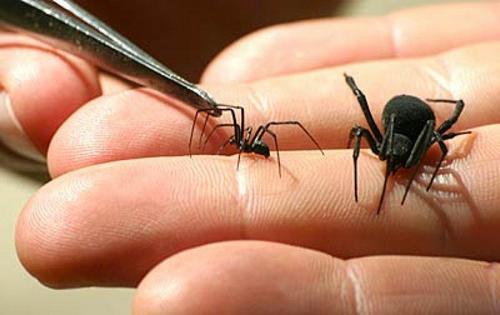 The main difference males from females in karakurt, is the size. The female is almost twice the male. It can reach two inches in length, while the male more than seven millimeters does not grow. In addition, the abdomen of the male has red spots. The female body is painted in a deep black color.

Widow, like other spiders, good runners, and can cover a large distance and at high speed. This is all the more surprising, because the limbs of the spider are completely absent in the muscle fibers.

In addition the movement uses the spider legs for digging burrows and netting. Also on the legs there are olfactory and tactile organs.

Widow, like all spiders are predators. They catch their prey with their webs. To catch prey spiders stick chelicerae, producing venom and digestive juices. Oputa victim with a web, they leave it for some time. Digestive juices quickly digest the prey, then the spiders suck out the resulting soup.

The female black widow, before mating, leaving nest, and is in constant motion, leaving behind a special dual thread, which male it is.

The process of mating is preceded by a rather long dance. The male shakes abdomen, briskly moves pedipalpi.

Approaching spider to your partner with the greatest care, but females show aggression only when not ready. Females don’t attack partners, and favorably accept the courtship.

The rivalry of the males during the mating season is common. One female collects near to ten contenders fighting each other. The most strong and agile drives away other males and moves to the marriage game.

During mating the female black widow is in a state of catalepsy and remained motionless for a long time. In this state it is for the male not dangerous.

After, the female suddenly out of his stupor and causes partner a few strokes of the chelicerae, and then the partner turns into a small lump. The female gets rid of the deceased partner and the courtship takes the next Challenger. Despite the creepy appearance, this feature of the behavior of karakurt for the species as a whole has a positive value. Males are capable of mating only once in a lifetime. Left alive they would have made the competition even scopulariopsis males, thus complicating the reproduction of the species. Read our article: Why the black widow eats her husband? 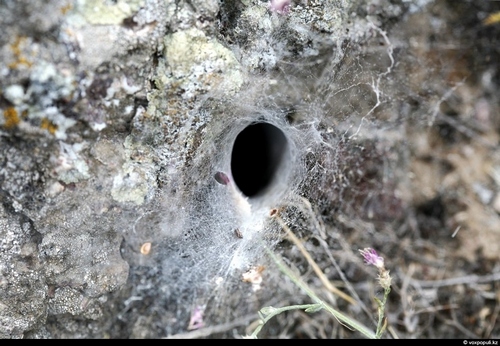 A nest of black widow

Caring for offspring in females karakurt pronounced during the incubation period. First of all, they are looking for a place for the future of masonry, tearing the nest in the ground or adapting to this abandoned burrows of rodents. Before entering the nest she pulls lovchie networks. And then lay cocoons of eggs. Females remain in the nest the whole period of incubation. Juveniles usually appears in April.

With the advent of the offspring of maternal functions performed females and juveniles attached to the webs, is carried by the wind. By early summer the young of the black widow reaches maturity and is able to mate.

The karakurt many enemies in the wild. Herds of grazing animals trample the grass and destroy the nests of karakurt. Jerzy, are not susceptible to the poison of karakurt, so eat them fearlessly. A large number of beetles and wasps lay their larvae in the cocoons of spiders, destroying the brood.

Karakurt and the people

The venom of Latrodectus is composed of the neurotoxin and effects similar to poison of rattlesnakes. In the place of the bite there is redness, which quickly disappears. A quarter of an hour appear sharp pain in the abdomen, chest, numb feet. All this is accompanied by mental stimulation convulsions, headache. Heartbeat slowing, arrhythmia appears in the urine there is a blood protein. The victim’s condition becomes critical. Most effective is protivokashleva serum. With timely introduction, the patient’s condition rapidly normalized.

It should be noted that widow never attack first. Spiders are aggressive only if they are disturbed. The most dangerous are bites females. The greatest number of bites occurs in June-July – the annual migration.