Cats are known for their ability to do what they like, in spite of all circumstances. In dogs there is another distinctive feature. These animals are distinguished by their exceptional devotion, they are able to sacrifice for the sake of the owners, and for people in General. During the Second world war, hundreds of dogs have received awards for saving people, pulling out the wounded, laying communication cables, and even threw themselves under tanks with grenades and other explosive devices. Also dogs performed feats in times of peace. 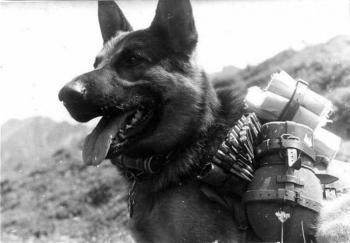 What a dog’s actions are considered the most prominent? Some of the deeds committed by these animals became known to people around the world.

The story of the heroism of Balto, the dog who saved a city known to everyone. This case occurred in 1925 in Alaska, in the small town of Nome, where there was an epidemic of diphtheria. The situation quickly became critical, toxoid, and drugs needed to save lives, miss stopped, take new was nowhere. Lost in the snow the town was on the verge of death, because to raise the aircraft and send them for drugs was not possible due to storms. Then decided to transport the serum to Nenana, another town in 1085 km away from the scene of the tragedy, from there we had to take out the drugs by sled dogs.

For drugs went musher on a dog sled, but on the way back he lost consciousness – the cargo from life-saving drugs was 50 miles from Noma. Then the leader of the sled dog Balto took the lead and took the driver and cargo to the city, despite the storm. Sled dog saved the city, the epidemic has been stopped. In honor of this feat annually conduct Greyhound racing “the Race of mercy.”

The St. Bernard is a breed rescue dogs, they are associated with avalanche regions of the Alps, the rubble, first aid kit with a red cross on the side and a keg of spirits, which is also tied to the dog neck. This large breed appeared at the monastery of St. Bernard, in the highlands of the Swiss Alps, where he became a personification of the rescue of people from snow captivity. The dog is not afraid of snow and cold because of their thick fur, and her sense of smell and hearing can detect people hidden deep under the snow rubble.

The most famous Alpine rescue on four legs was the St. Bernard Barry, who served at the monastery and saved people in the early 19th century. They say that he saved 40 people, including a boy who is in the cave, which the dog found, warmed and took it home. We don’t know how ended the career of this rescuer – someone said that 41 saved shot and killed him, taking the wolf. But other people claim that he served the monastery until old age. Since then and to this day in the monastery there should always be a St. Bernard named Barry – it has become a tradition.

Huge glory got the dog Dzhul’bars. His feats was rated so highly that he took the dog to the parade 1945. The dog was carrying in his coat of Stalin, he was in the hands of Alexander Masorina, the chief military dog handlers. Dog was in mine-search service. Despite its bespardonnosti, ‘bars had a unique scent and penetrating mind. He found 468 min, about 150 shells, rescuing people and unique architectural monuments. The dog was able to clear the Kiev Vladimir Cathedral, Prague castles and Palaces on the Danube, and Vienna cathedrals.

Interesting fact: there is a perception that Dzhul’bars was a shepherd. But this is not true. Heroic service with such results bore that is a simple mongrel.

In wartime dogs actively helped the nurses in their difficult task of saving injured. Mukhtar doing this type of work, managed to save more than 400 people. Also, this dog saved his guide, which was made by the corporal Zorin – he’s got a concussion, and perhaps could survive without the help of his faithful dog. Dogs nurses determined whether this person is alive, and finding the wounded, they brought him up and helped to move to a safe place. Thus was saved a huge number of human lives.

Hachiko and his master

Faithfulness, loyalty of dogs knows no bounds and it was again proved by the feat of Hachiko. After a dog was even filmed. The dog was born in 1923, she belonged to the breed Akita inu and her puppy gave man by the name of Hidesaburo Ueno who was a Professor. She was so attached to his master that walked every day before the train, and then, in the evening, was met at the station to escort back home. But one sad day, the man did not return – he suffered a heart attack and was unable to save.

The dog was 18 months, however, the concept of devotion she had already fully formed. Hachiko returned to the station and waited for the right time, even after he tried to take in relatives of the deceased. The whole 9 years the dog waited for owner, and no one knows what he felt in those moments when once again came to the station to the right time. By the time of the death of the dog knew about it already throughout the country, the day of his death became a day of national mourning.

Dog-sapper Elga is a German shepherd born in 2001, serving until 2012. She saved hundreds of lives, going with his master – a dog in a dangerous trip to Dagestan, Chechnya. With her help, it cleared a lot of objects, sense – common canine and professional – do not let the heroine. Service was given to the dog is not just for the first time coming under fire, she lost the puppies, giving birth to them prematurely – so a lot of stress had to endure Elge. But then she learned calmly to the shooting, to go with these sounds on the ground and wait for further commands. In 2012, Elga hit a mine, received injuries, which seriously undermined her health, and then died. On her grave is a monument.

Thus, dogs are capable of incredible feats, their loyalty and dedication knows no equal. Moreover, the cases of canine heroism is not limited to this list. The dog risked and sacrificed themselves for hundreds of people, thousands of times. No wonder they are sometimes erect monuments.

3 Comments on “The heroic deeds of dogs”