Snail is a common name, informal used for special types of gastropods. The name most often applied to land snails, terrestrial gastropod mollusks. 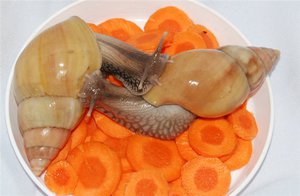 The ancestors of snails – one of the earliest types of animals in the world. There is fossil evidence of primitive gastropods belonging to the late Cambrian period; this means that they lived nearly 500 million years ago.

There are many types, but they are fundamentally different because they are aquatic or terrestrial. The first used to live in the sea or in fresh water, but the latter live exclusively on land, though in wet areas.

One Comment on “Street snails and Achatina – what they eat, food for a healthy pet”