Caring for a pet is not only limited to feeding, hygiene activities and games lessons. It also includes health care to four-legged pet. Cat owners are often forced to give fluffy antihelminthic drugs, vitamins in pill form as well as medications prescribed by a veterinarian.

Unfortunately, most cats are trying to wriggle out from taking bitter pills: begin clawing and kicking hind legs, and sent into the mouth of the pill, immediately trying to spit it out. In this regard, it is important to master the basic techniques, allowing to give the cat pills without any trouble.

This greatly simplifies the treatment process and maintain the good health of the animal. How to give a cat a worm pill, so as not to cause discomfort for themselves or their ward?

What symptoms indicate that a cat is shown anthelmintic therapy

Rules of treatment with tablets from worms

How to give a pill to the cat

Many tablets, with rare exception, bitter, but if capsule or tablet cannot be replaced by injection, the owner remains nothing how to adapt to the model of behavior of their pet and take advantage of the most appropriate method through which tablet will be in the stomach of cats. To the delight of pet owners, there are many clever and effective techniques.

To disguise the food

First you need to make sure it does not disappear, the therapeutic effect of taking the pill, if you use this method.

Usually such information is contained in the instructions to the drug:

With a piece of butter

All attempts to spit it out, greased the tablet will be in vain. Dairy product due to the oily consistency will promote the tablets in the throat:

By stimulating the swallowing reflex

Stimulating the root of a cat’s tongue can cause a swallowing reflex. Holding the mouth of the cat with one hand, put the pill, trying to shove it as deep as possible, but not pushing, otherwise there will be belching or vomiting. After pill where necessary, shutting mouth of the animal, and for some time hold of the jaw. As a rule, this manipulation is sufficient that the cat swallowed the pill.

Take the cat by the scruff

If you grab the cat by the scruff and lift above the ground, it will automatically drop the lower jaw. Importantly, capture by hand as much skin as possible. Do not be afraid to inflict pain pet, as this procedure is absolutely painless. Also not to injure the cat in the psychological sense, in contrast to the same force of the unclamping of the jaw, which is so often advise inexperienced professionals. Slightly tilt back the head of a cat, then on the tongue throw a pill. The farther she’ll go, the higher the chances that the animal will not be able to spit it out. After close the jaws and lift the head, caress pet’s neck, helping him to swallow the medicine.

Piller is a medical device that looks like an ordinary syringe. It facilitates the process of entering a medicinal product to an animal.

If the cat refuses or is unable for some reason to swallow the tablet whole, there is an option to use a syringe (without a needle). Stir the crushed tablet in a small amount of water and with a syringe inject into the jaws of the cat. In this case the cat must be in a sitting position, and the muzzle cocked to the ceiling. The syringe pushes into the gap between the back teeth and poured the medicinal substance. The animal swallowed the medicine, his face bullied up and gently Pat on the neck. One should not give more than 1 ml of medication.

If all the above tricks did not succeed, and the cat flatly refuses to swallow a tablet from worms, go to drastic measures – immobilize the animal with sheets or towels. This measure has worked well when dealing with skittish cats who need to get a shot. Carefully record the front and back paws to the cat it was not possible to escape, and then open her mouth and put into the language of the tablet. It is likely that you will need an assistant, especially if the animal is large and aggressive.

Changing cats will need at least a square meter of fabric. This can be as a regular towel and bed sheet.

Cat wrapped in a towel so that the front feet tightly against the body, and the rear was not sticking out from under the fabric. In order to avoid injury to the animal, you need to be very careful winding the body of the pet. Be sure to leave a small space around the neck of the cat, so she could easily swallow it. 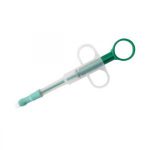 If the cat is struggling to get out of a kind of incarceration, the procedure is best postponed until better times, otherwise the attempt will fail.

So, the animal is seated to the man’s back, and the owner of one arm does not allow the pet to escape, the second hand remains free.

An important remark. People don’t push the cat with his body and kneels, creating additional fixation.

Moving to the most crucial moment. Taking a free hand and a pill and the other holding the head of a cat, stick your thumb in his mouth. Most importantly, do not overdo it down the pill in the cat’s mouth. Also, do not too wide open cat’s mouth.

Act quickly, as your pet will hardly like to be immobilized. In attempts to escape he will actively turn his head.

As soon as the mouth is opened, placing the upper part of the head back and throw the pill on the Central part of the base of the tongue. It is strictly forbidden to shove the pill into the throat with your finger. If the tablet will be close to the tip of the tongue, the taste buds will certainly determine unpleasant taste, and the cat wants to spit out the bitter medicine.

In the end, quickly close its mouth and hold her hand, head down, otherwise it will be difficult to swallow.

A little blowing into the nostrils of a cat, it is possible to stimulate swallowing.