Bred in the South-East Asia the Mekong Bobtail from other cat breeds are distinguished by a short tail with kinks and high intellectual level. The people-the breeders of this cat breed is a gentle soul and a soft heart.

And the pet teaches them to decency and order in the house and indicates their shortcomings in everyday life and behavior. Bobtail can be considered as both dogs and cat sitters in the guise. But if your pet is quite clever, and its not very long tail might be a virtue.

The history of the origin of the breed Mekong Bobtail

This breed was bred for a very long time. Because of this, it is difficult to specify the exact date of its origin. These animals came from the banks of the river Mekong. Even in the records of Charles Darwin can you find a mention of the fact that almost all the cats in Southeast Asia has broken the cropped tail. These cats were called Royal. While bathing Mekong Princess strung on the broken cat tails your jewelry. They did this in order to not to lose them.

While walking Bobtail accompanied the royals. These cats have guarded the treasures that were in ancient temples. Abroad, their export was forbidden because they were considered a national treasure. The future founders of the line was first exported abroad, as a gift to high-ranking personages of South-East Asia, Iran, China, Cambodia, Laos, Burma and India.

The Mekong Bobtail is often called tailless cats, but still the tail is present. Color color-point Siamese colors reminiscent of the friends of the old type. It is for this reason often called Thai Mekong bobtails bobtails. But still a significant difference between them exists; the Thai Bobtail and Siamese cats do not have such a short wonderful broken tail which distinguishes and adorns the Mekong Bobtail, making it unique. Each representative of this kind has its own special unique tail.

At Mekong Bobtail has a very vital feature – their skin is drawn over the body. It is not once saved an animal’s life. Thai wild nature, there are many poisonous insects and snakes. Due to this particular skin, the Mekong river has managed to survive even after he was bitten by a poisonous insect. When a wild animal bites you, the poison it first, some time delayed under the skin and then enters the bloodstream. Until the poison reached the muscle, the Mekong has been able to treat myself slightly, thus avoiding death.

Mekong Bobtail is an ancient and rare, but still pretty young cat breed. Its a few years. Around the world, you can count only 400 cats of this breed.

It is an open breed. In other words, if the cat fit the standard, she may issue documentary pedigree.

The color is different: 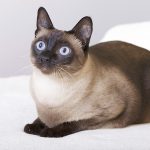 Acceptable, different colors of Mekong bobtails, except white. The most exclusive is the color blue – point.

Description of the behavior of Mekong Bobtail

Mekong Bobtail is often called the little man. He understands and behaves accordingly. When expressed care and love to him, you will certainly get the same return. The animal tied at the genetic level to the owner, not to the house. Where ever you go, he will always be with you. Mekong cats are very neat, tidy, and loyal friends. Looking into sky-blue eyes of the animal can understand all of what he thinks. Even if you spend hours going to look into the eyes of these cats, they will never take a glance.

Claws fully on their hind legs these cats do not hide. That is why when you walk you can hear them like dogs. And yet the dog’s features, you can view and behavior of the cat. They are the guards of your home and growl when the doorbell rings the front door. Look who’s here, they will sniff the guest, and only then decide whether to let him in the house.

This breed of cats is recommended to those people who need to communicate. They will communicate with you different voice intonations. Instead of meowing, they emit characteristic sounds. Chatting with them must. If you have the apartment a mess, they will tell you what and where the wrong lies.

Due to the fact that cats of this breed are calmer, they perfectly relieve stress. And cats more sociable and active. Cat recommended is not very economical to the people. It will show you at home disadvantages. In those places where you have clutter, it will stand for a long time and is constantly meowing.

Females real women with a unique character. She mother was the hostess. They can always come up with something new. From others require constant attention. They are able to poubirat toys for your child and to check whether all is in order in his things.

Males in nature are also peculiar. They are always calm. Small children can play as dolls to carry in toy strollers, tie them with ribbons and wrapped in swaddling cloth. On such abuse, they react calmly.

This is a dedicated feline breed that responds well to training. In their behavior they are more like dogs. They are to his owner used, and after all his deeds accompany. They can bring a host of different household items. Them you can safely walk on a leash. It is affectionate animals. They love when they pay attention.

They are very curious and hunting instincts they are expressed well. They hunt for everything that can move (even flies). To avoid the tragedy in the house is better not to keep fish and birds. Cats are a different breed and with dogs they get along well. If you are in the house a few animals, then they definitely need to prolistovat to vaccinate.

They pronounced a matriarchy. The behavior of cats has its own characteristics: my lady, they look, hum and sing arias. Labels in the corners, they never leave. Having withdrawn from it the cat it will be a few days to go and look for her. During pregnancy the cat can afford the pranks and whims. When the kids are born, they immediately turned into a caring mommy. Females are real nurses and Moneymaker. Children married, father: it teaches kids to the toilet and grooming, licking them.

How to take care of Mekong Bobtail

The care of this breed is in such procedures.

For Mekong cats was not observed genetic diseases. Many scientists agree that this breed is one of the healthiest. But it has been observed that they are prone to gingivitis – periodontitis easy form.

In order to determine the onset of the disease, should pay attention to these symptoms:

But to determine the diagnosis and prescribe the appropriate treatment can only be a veterinarian. But the host can prevent gingivitis – brush teeth regularly and to give special feed, which have been developed to reduce plaque formation.

Toothbrush you need a special toothbrush, cotton swabs and toothpaste for cats. The toothpaste that is meant for a person, in any case not suitable for your pet. It can become a real poison. Your pet after a while this procedure gets used. Just be patient.

The pros of the breed

If you are still thinking whether to get from his home in the Mekong breed, then pay attention to the following positive qualities: