Gray partridge (Latin Perdix perdix) is a widespread species from the genus of partridges. Difficult to distinguish from another species, the bearded partridge.

Fossil remains are known for two prehistoric species – P. palaeoperdix and P. margaritae. P.palaeoperdix was distributed throughout southern Europe in the Early and Late Pleistocene and constituted an important part of the diet of Cro-Magnon and Neanderthals. The phylogenetic position of this species and the gray partridge is not clear enough.

Although they undoubtedly had an outward similarity, the gray partridge, rather, did not originate from this Pleistocene taxon, and both species should be considered nursing. P. margaritae is known from the late Pliocene of Transbaikalia and Northern Mongolia – this species also can not be considered ancestral to the modern P. perdix and P. dauuricae.

It has a round body, the total length is 28-32 cm. The beak and legs are of dark color. The upper part of the feathering is pockmarked, brown, flanks and the tail are red. Spurs on the legs absent. Sexual differences are reduced only to the fact that the females are more pale.

They live in the temperate zone of Eurasia. It inhabits almost all of Europe, Asia Minor, Kazakhstan and the south of Western Siberia, from the British Isles and Scandinavia to the Altai and Tuva. In the Turan lowland to the south of the lower reaches of the Syr Darya is absent. In Scandinavia and Finland penetrates to the north to 66 ° N. In Karelia up to the 65th parallel. In the Middle Urals, the northern boundary passes in the regions of Krasnoufimsk and Yekaterinburg, and in Western Siberia – in the region of the 57th parallel. To the east the gray partridge reaches Altai, Tuva, western Dzungaria and the lower reaches of the Ili River. At the meridian of Tashkent, its range almost reaches 40 ° N. W.

Lives in different biotopes: in mixed herbs with shrubs and forest potholes in the plains and valleys of rivers, in forest-steppes, in grain fields and in deposits, in forest felling, on forest fringes, over ravines, overgrown shrubs, rarely on heath waste land, in Hilly sands with thickets of willow or tamarisk. In the mountainous areas it is kept in the foothills, on the fields in the forest belt and rises to subalpine meadows.

They are sedentary birds, they live in open areas. Eat a variety of seeds, sometimes insects. Nests are arranged on the ground in the form of lined recesses, located in secluded places.
The voice of the male is a loud «cockerel» similar to a rooster cry, and females are a whack.

In winter, it moves to populated areas, sleeps in courtyards, at buildings, as well as in bushes or at the foot of barkhans and hills, gathering in a close flock on the snow from the lee side. 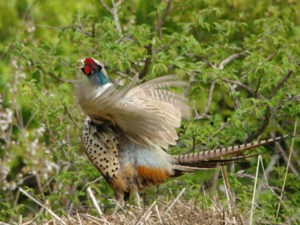