After the recent discussion of the taiga fishing in Canada in the group “Fishing in Montreal” on Facebook, decided to clarify some aspects of fishing in the region North of Quebec, and at the same time to debunk a few myths and misconceptions that can lead to big fines.

The region North of Quebec (FR.- Nord-du-Québec) is the largest administrative region of Quebec, which became part of the province in 1912. It is divided into three areas: the more developed and westernized part of Jamesi (FR.- Jamésie, another name for the Baie-James) in the South; Inuit territory Nunavik (FR.- Nunavik, also known as Nouveau-Québec) in the North; several enclaves Cree, created in 2007. and United under the common name Autonomous oblast Cree (FR.- Administration régionale crie), looking like small Islands inside the territory of Jamesi and Nunavik.

The name “Jamesi” is due to the location of the area to the East of James Bay (FR.- Or La baie James baie de James, eng.- James Bay). In the official documents of the land can be found under the name “Bay James”. Nunavik often called the”New Quebec”, which in General North of Quebec is often called the “territoires de la Baie-James et du Nouveau-Québec”.

After signing the agreement in November 1975. between the Grand Council of the Cree, the Inuit of Nunavik and the governments of Quebec and Canada, recognized the specific rights of indigenous peoples, as Avtonomov (groups, the development of which occurred in the territory). In these areas there was even a special law regulating fishing and hunting in the North of Quebec (Loi sur les droits de chasse et de pêche dans les territoires de la Baie-James et du Nouveau-Québec), which gave indigenous peoples the exclusive right to use the land, hunting and fishing, and for 30 years gave priority to the development of pourvoirie.

If above it was a question of administrative division, in relation to sport fishing, it is necessary to know the following: Quebec is divided into 29 fishing zones. The rules that are set in relation to the limit on catch limit possession limit size are the basic rules in force across a specific area.

North of Quebec city mainly falls under the following areas of sport fishing: 22 (Jamesi) and 23 (Nunavik), and 22 area 22 is divided into nord and sud 22 at the 52 parallel. All applicable rules of these zones can be explored on the official website, and we must remember that if the dropdown list does not specify a particular body of water, it shall apply the General rules of the zone.

To sport fishing in the region North of Quebec, you must also comply with the”Law on the rights of hunting and fishing on lands of the James Bay and New Quebec” (Loi sur les droits de chasse et de pêche sur les territoires de la Baie-James et du Nouveau-Québec). In particular, it is necessary to respect the lands of categories I, II and III.

Land categories I and II are reserved for local use by indigenous peoples. To hunt and to fish in these lands, you must obtain special permission from the respective owners of autochthonous and perform its terms.

In category III lands, as in other regions of Quebec, hunting and sport fishing do not require special permits, with certain exceptions: it is impossible to hunt fur-bearing animals or to catch them, and take some species of fish, such as whitefish, which is only allowed for indigenous peoples. North of the 52nd parallel, non-residents of Quebec must also use hunting and fishing equipment provided by the owners of pourvoirie.

Below on the map of lands of James Bay in different colors allocated land in different categories, as well as the nature reserve of lakes Albanel, Mistassini and Waconichi (réserve faunique des Lacs-Albanel-Mistassini-et-Waconichi). White allocated land category III, which do not require special permits from the local tribes, and which rules 22 zone sport fishing.

For example, for zone 22 sud establishes General limits on the catch of pike – canadian and svetlomety = 8 in total. This means that the day can be saved after catching 8 perch, regardless of their type. It is also a limit on the ownership, it is impossible to take home more than 8 pieces. If You catch on the boat and brought to the camp on 8 perch, You can in the same day, all to eat them. Then the next day You can again bring to your camp 8 pieces.

If You decide to eat 4, and 4 put in the fridge, then the next day You can bring to the camp not more than 4 pieces, so in total You have 8 perch. Any eating fish day fishing are the current daily limit on the catch.

If You rented a house for a week, then it is impossible to summarize daily limits, i.e. 7*8= 56 perch. All of the fish, which is above the allowed limit is a violation of the limit on the possession and penalized. You can’t exceed the limit on the ownership of neither the fishery nor in the camp or on the road or at home.

For some specific bodies of water or nature reserves will also indicate the limits on the catch, usually the same as the area – lac Terres en I et II de Mistissini (a lake on the lands of categories I and II), réserve faunique Assinica, lac sans nom (51°43′ N., 75°59′ O.). If the pond is not listed, then it is subject to the General rules of the zone.

In respect of limits on the amount you must also consult with the official website. For example, for zone 22 on the canadian walleye size limit there, and on svetloserogo in accordance with the development Plan walleye in Quebec determined the size of 37-53 cm inclusive, but you can take one walleye more than 53 cm But for reserves (Réserves fauniques des lacs Albanel-Mistassini-et-Waconichi et Assinica) are allowed to take Sudakov without restrictions in size, which makes this place popular for catching trophy fish.

By the way, it should be noted that walleye should be stored either in carcasses or as “fillet-wallet” to be able to identify the fish and measure its size when checking.

If You catch in the official porvari, even if You have not explained the rules of fishing, the rules of the zone, and certainly at Your conscience. Any oral assurances of the type “there are no limits”, “you can catch all you want” is a delusion or simple ignorance of the rules.

By the way, faced with the fact that the land categories III locals can be called “free territories” (eng.- free Guadeloupe, FR.- territoires libres). For them it is really so, because the rules of the land categories I and II do not apply to them, i.e. do not require any special permissions from the communities Avtonomov. However, this means that these lands are the normal rules of the zone in which the site is located catching.

If You clear the house is not in the official porvari, and private cabin or Chalet, keep in mind the fact that the house dealer can promise a “sea fish” and talking about fishing that you like, but that does not mean that the rules of fishing a specific zone can be broken. Such rent “black” possible, even on the website Kiiji you can easily find the Chalet on the lake, where fishing is possible. But adherence to the rules is the conscience of the fisherman.

It should also be noted that the possible exceptions to the rule for some porvari, but they must be official documents granting exclusive rights. Owners of private, porvari can set their own limits on the catch, but before leaving home make sure You have on hand was the receipt for fishing in this place, the number of fish taken, etc This will protect You from possible trouble.

If you catch the principle of “catch and release”, in addition to Atlantic salmon, there are no special limits. This is what I wrote in the article “adherence to the rules of sport fishing in Quebec and Ontario”. So the inscription about 200 and 300 fish caught on the walls of the houses – this is normal, as the local usually think as they catch fish, not how much they took away with them. I repeat, this is common in Quebec the tradition is to count how many you pulled out of the water fish, but then release them back into the water. Fishing is for fun. It is a mistake to assume that if the other is written, it means that you can with themselves to take home the same amount of fish.

People go into the forest, far from civilization place to view wildlife and to fish for fun. It is clear that fish place to eat: soup on fresh air, and even cooked over a campfire, a long time will not forget, and good company. But such visits should be treated as active rest, and not as the harvesting of fish for the whole year.

Overall, in Quebec, a lot of different places where you can be surrounded by wildlife and different degrees of “civilization”, but more about that in next article. 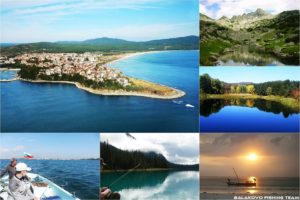