Self-loading carbine, working on the principle of the gas piston. Produced Browning arms company – directly in the historic homeland, in Belgium and in the United States. Now discontinued, but is still found in the list of suggestions gun stores (it is not excluded that already in the Chinese version).

An interesting detail of the design is that the piston and return mechanism located under the barrel.

That it is possible to read from it a model index:

Due to the complexity of the design the carbine is better not to assort independently, consumers masters-gunsmiths. Clean it very difficult. For example, the barrel cleaning is performed with the breech, pulling the brush on the cord through the channel. A mechanism many hunters do not clean, limited to the technical lubrication liquid of type WD. 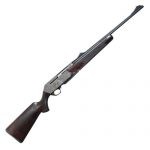 Used for hunting hoofed animals and large predators, if the expected range of more than three hundred meters.

Carabiners BAR Long Trac (to model index has added Oil Finish because they are on a shutter delay after shooting the last bullet) are produced not in such elegant design, and chambered in a versatile caliber .270 Win used for hunting small ungulates in the distance of firing up to 400 meters.

A hopper of the shop is made of aluminium, and a polymer. To access the bunker you need to open the lid by pressing the lever in front of trigger guard. Magazine capacity 4 rounds, design allows you to drive the fifth cartridge in the chamber.

Bed polupoltina, butt with removable handle, rubber recoil pad, its height can be changed using one of the three in the package.

The rifle comes in a cardboard packaging.

Supplied with three interchangeable butt plate and six spacers to change the angle of the stock relative to the receiver. Attached the manual and certificate.

The carbine mechanism operates using the principle of the gas piston.

The design of the recoil mechanism consists of many small parts, so self-disassembly of the rifle can be performed only in cases of extreme necessity.

On the carbine you can install straps or brackets under the optics using the hole with metric thread into the receiver. If you want you can remove the rear sight and the front sight are attached with small screws.

The price and the reviews on the carbine Browning Bar .30-06 Light Long Trac Executive is given below.

The Executive model is one of the most expensive. Its price starts from 500 thousand rubles. Prices of the model range Bar Long Trac start from 110 thousand, although on the manufacturer’s website they ask for no more than 1300 $.

The carbine has excellent shooting properties, the value of the MOA is less than one. He has a mild recoil, that allows you to shoot Magnum cartridges even physically unprepared people. The mechanism of the carbine is extremely reliable and able to work in the most adverse conditions. Oddly enough, but to keep it running smoothly enough to fill in the receiver technical fluid WD.