The result is that the Ministry of defence of the USSR was a competition among design bureaus for the best sample of the new sniper rifle. As a result, in the final contest showcased a few samples and the results of the tests, the Commission has adopted the sample submitted by the designer Eugene Dragunov.

After the war, the island became a question on creation for the army’s new sniper rifle. The good old three-line, despite its reliability irrevocably outdated, especially compared to the latest models of sniper rifles in the NATO countries.

This self-loading sniper rifle was designated the SVD, by the name of its Creator, and is in service of our army since 1963. In addition, the Dragunov was and is in service with the armies of dozens of countries around the world. Among the design features of the new rifle was a shop on standard 10 bullets from the rifle Mosin-Nagant (7.62 x 54). Recharging is done via gas piston when fired. As for its reliability and resistance to adverse environmental factors (moisture, dirt, dust, temperature extremes), the Dragunov is far superior to similar Western models stood on a par with the iconic Kalashnikov assault rifle.

The first “Tiger”: the pros and cons.

Immediately after adopting his rifle, the Dragunov, the designer began to create a hunting version of SVD. And at the end of the 60’s was presented the first prototype on the basis of army rifles. And after ten years at the arms factory in Izhevsk in the production was launched on the carbine “Tiger”.

Designed “Tiger” was for hunting big and medium-sized animals – classic bullet from trehlineyki 7.62 x 54 made in the hunting jacketed hollow-point version, had great stopping power. Reliability, simplicity in handling and care was also above and beyond. The first carbine “Tiger” had excellent accuracy and rate of fire. However, like any “conversion”, a carbine “the Tiger” had a number of deficiencies in the design.

Among the main complaints from hunters was:

In the 90-ies of the hunting modification began to be delivered in Western countries. To improve the competitiveness of the rifle as in a foreign market, and domestic wherever have begun to actively penetrate foreign models of hunting weapons, Izhmash designers began work on improving the design of the carbine “Tiger”. The result was submitted to new, modern version under the name “Tiger-1”.

Among the design innovations were:

* Universal side mount is compatible with most hunting optics.

* Muzzle brake – compensator, which greatly reduced the recoil and allowed to avoid the glare of the hunter when fired.

* Changed the shape of the stock – added handle type pistol grip for ease of grip.

* Extended free play fly for easy zeroing of the rifle.

The carbine “Tiger” with a folding stock.

Has also been expanded range of cartridges. In the new “tiger”, produced in various versions, ammunition has been expanded to four types:

Each of these modifications has a few versions, all more than ten – with plywood and plastic butts of various shapes (orthopedic, folding). The main difference can be called the length of the barrel – the “Tigers” are executed on both the long and short barrel.

Reviews from hunters on the carbine “Tiger”.

Many hunters who have dealt with the “Tiger” noted to its excellent carcass quality compared with other domestic carbine using a weaker cartridge the SKS or Vepr’. As noted, the carbine “Tiger” practically does not leave wounded game, even when hunting large ungulates. Jacketed hollow-point bullet 7.62 x 54 provide a reliable destruction of the beast, even at extreme shooting distances and great accuracy and rate of fire allow you to hit even a fast moving, relatively small target, the wolves, small wild boars, foxes. Misfires and delays of the shot when shooting from a carbine “the Tiger” is not seen. Its positive role is played by the reliable automatic inherited from Dragunov rifles. Favorable impression it leaves and the smooth easy trigger pull.

Among the minor disadvantages of the carbine “Tiger” experienced hunters say that when removing the weapon from the guard can hear a quiet click. However, when hunting with “labaz” (tower) this is a slight click can be alerted, if not to spook the beast. Consequently it is recommended to use the lever guard plastic ring from the cartridges 12-gauge – it deadens the sound of impact.

For Russian conditions, it is recommended to buy a carbine “the Tiger” chambered in 7.62 x 54. It is very cheap and shows excellent ballistic quality when shooting at distances up to 200 m. As practice shows, when using heavy bullets when fired from a carbine “the Tiger” complicated aiming, because they fly at a steeper trajectory. The best option – 13-gram jacketed hollow-point bullets Novosibirsk or Barnaul plants. Such a cartridge takes a great elk with a distance of 200 – 250 m.

As to the performance of the rifle better – a long-barreled and short-barreled variant, we can say that accuracy and effective range of fire from this does not depend on. At least not enough to be somehow a critical factor in the selection. And here is a version with a short barrel is much more comfortable when shooting “on the move” – in this case, the extra hundred grams of weight or a dozen centimeters can hold the choice of weapons to those hundredths of a second, enough for the beast disappeared.

Due to the fact that the carbine “Tiger” is made in a large number of options, before buying you should seriously consider the choice to try the mod for yourself. After which it will be possible to stay at some specific version, the most suitable specifically for you. Based on the foregoing, we can conclude that the carbine “Tiger” is currently the most viable option for hunting large beast of all the Russian hunting carbines. As for its reliability and simplicity, he has no equal, perhaps even among foreign weapons of this class. 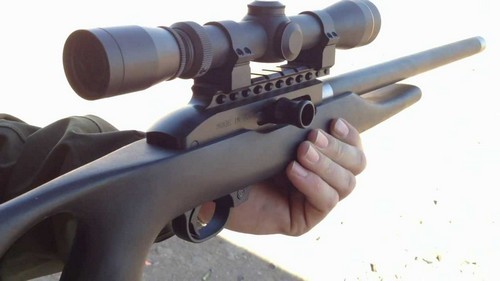