Hunting rifle Marlin 1895 is a weapon, reloading is clip Henry (Lever Action). It is available for over a hundred years and among North American shooters considered a cult model, practically a national treasure.

From 1884 Marlin model differs in the form of the shutter and large caliber, for which he received the unofficial name Big Bore.

Shop tubular underbarrel. Ejection through the window on the side (right) side of the receiver. It’s possible to install optical sights.

Design, time-tested. Authentic carbine during the development of Wild West, which determined its popularity in the US, where there is the cult of the cowboy romance.

Ammo .45-70 Government not widespread in Russia and they are expensive. 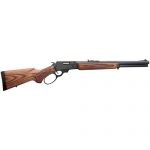 This is the weapon for big game hunting – elk, deer, wild boars and bears in the Bush, when the shooting distance is small.

The Marlin 1895 is a rifle with a tubular underbarrel store which is recharged by the clip Henry – Lever Action.

The rifle comes in a cardboard box. In the package he and the manual.

More complete disassembly at home is not recommended.

A bullet fired from the barrel of the rifle, has great stopping power. Adult moose flatten you. The weapon is quite reliable, but requires the ability to handle the plumbing tool. About as with cars UAZ and VAZ. Impact, despite ivory caliber is quite reasonable. There may be problems with the acquisition of ammunition.