Surely the best known of (non-bird) dinosaurs are the hadrosaurs or hadrosaurids, that Cretaceous, mostly Asiamerican group vernacularly termed duckbills or duckbilled dinosaurs (though see the previous article on why this term may well be deemed inappropriate).

An increased number of discoveries and a burgeoning community of hadrosaur-themed workers led two Canadian palaeontologists – David Eberth and David Evans – to convene the International Hadrosaur Symposium in September 2011, and this 2014 volume – its one-word title being perhaps unique for a multi-author work resulting from a conference – is the result, Eberth and Evans its editors (Eberth & Evans 2014). Yes, the volume I’m discussing here is not that new. I’m sorry: it takes me ages to review books.

Hadrosaurs is an enormous and impressive work: 619 pages long and including 36 separate contributions involving over 80 authors. It continues the tradition of weighty, multi-author, dinosaur-themed books published by Indiana University Press (IUP). We generally like such books, but a problem is that they can have both a somewhat random feel (you sometimes get the impression that they include whatever spare manuscripts scientists have lying around; half-baked projects or those not good enough for publication in journals) and a massive fluctuation in strength and quality. Hadrosaurs pretty much avoids these pitfalls; most contributions are useful, of high quality, and will be cited and used.

A montage of hadrosaurs and related iguanodontian ornithopods: an in-prep illustration from my gigantic in-prep textbook project (which can you support here). Credit: Darren Naish

Its chapters (or articles, or papers) are grouped into six sections: an overview, hadrosaur origins, anatomy and variation, biogeography and biostratigraphy, function and growth, and preservation, tracks and traces. As I think I’ve said before (in a review of the structurally similar 2010 IUP volume New Perspectives on Horned Dinosaurs), it’s a reflection of how much data now exists on Mesozoic dinosaurs, and on how much work has been done, that gargantuan volumes like these can now be produced on single groups alone.

Needless to say, Hadrosaurs includes so much content that I can’t begin to comment on all of its contributions. In general, it’s well designed, ergonomic, has a great picture-to-text ratio and features its text and illustrations at a highly convenient size. The bulk of the book is made up of chapters that report new material and/or review previously named taxa. However, the inclusion of contributions that cover many other aspects of hadrosaur phylogeny, history, biology and taphonomy means that there’s at least something here of interest to anyone who studies dinosaurs or is seriously interested in them.

How many iguanodontians are present in the Lower Cretaceous strata of western Europe has been a somewhat contested issue in recent years, and opinions differ. The specimen at left (NHMUK R3788) has been regarded by some authors as a distinct taxon (Sellacoxa pauli), but it’s regarded as Norman as a probable specimen of Barilium dawsoni. At right, we have the Bernissart specimens of Iguanodon bernissartensis (at the front) and Mantellisaurus atherfieldensis (at the back, on the right). None of my photos of the Bernissart iguanodontians (on display at the IRSNB – the Royal Belgian Institute of Natural Sciences – in Brussels) are good, mostly because of the glass. Credit: Darren Naish

Not all hadrosaurs. The title is slightly misleading because some of the chapters – including those by David Norman and Andrew McDonald et al. – are not on hadrosaurs at all, but on other members of Iguanodontia (at least some of which are – ok, admittedly – members of the clades Hadrosauroidea and Hadrosauriformes). Norman’s article is one of several of recent years in which he attempts to tidy and resolve the now very messy and confusing taxonomy of Lower Cretaceous European iguanodontians (an area covered here in a few articles of recent years: see the links below; my articles are now substantially out-dated in view of his proposals).

I don’t disagree with any of this specifically, but I do think that there’s some element of grey attached to his synonymisations… when one taxon is named for a jaw and another for a pelvic region, are you really sure that they represent the same species?

In the same part of the book, Hai-lu You et al. name Gongpoquansaurus for the hadrosauroid previously known as Probactrosaurus mazongshanensis, Paul Barrett et al. re-evaluate those supposed hadrosaur teeth from the Cenomanian of England (both of the taxa involved appear to be non-hadrosaurid hadrosauroids) and Khishigjav Tsogbaatar et al. describe the new Mongolian taxon Plesiohadros djadokhtaensis from the relatively arid Djadokhta Formation. Plesiohadros appears to be very close to the origin of Hadrosauridae proper, and a colour life reconstruction of the taxon (produced by Julius Csotonyi) graces the book’s cover.

Among the several chapter reporting new hadrosaur material from the USA and Canada is Terry Gates et al.’s on Adelolophus hutchisoni from the Wahweap Formation of Utah, another new taxon.

The Amurosaurus specimen on display at the IRSNB, Brussels. This specimen is lacking the rounded cranial crest now known for this taxon. Credit: Darren Naish

Nicolás Campione provides a review of Edmontosaurus regalis from the Horseshoe Canyon Formation of Alberta, Kirstin Brink et al. discuss skull morphology and variation in Hypacrosaurus, and Yuri Bolotsky et al. update knowledge on Amurosaurus. Phylogenetic analysis indicates that Amurosaurus is a lambeosaurine outside the clade that includes parasaurolophins and corythosaurins (e.g., Godefroit et al. 2004, Evans & Reisz 2007), in which case the possibility exists that its tall, laterally compressed crest either evolved convergent with that of corythosaurins or is the primitive condition for the parasaurolophin + corythosaurin clade.

Additional chapters review the hadrosaurs of South America and Mexico and discuss the relocation of the lost Gryposaurus incurvimanus holotype quarry in Alberta (a project that involved the identification of trash fragments discarded by fieldworkers from the early 1900s).

One of the most exciting of hadrosaurs (… read on) to be described in recent years is the small, tridactyl, spiky-beaked Tethyshadros from north-east Italy, described by Fabio Dalla Vecchia in 2009 (and covered at Tet Zoo ver 2 here) (Dalla Vecchia 2009). As stressed in Dalla Vecchia’s chapter on latest Cretaceous European hadrosaurs, Tethyshadros is but one of some or many relatively small hadrosaurs that inhabited the island archipelagos of latest Cretaceous Europe.

Many of the remains concerned (those from, for example, Bulgaria, Slovenia and Germany) are not good enough to be named or identified precisely. Nevertheless, there’s evidence for several taxa (belonging to several hadrosaur lineages) in some parts of the European latest Cretaceous. Furthermore, some ‘taxa’ (notably Telmatosaurus transsylvanicus of Romania) might be wastebaskets housing as-yet-unrecognised new species.

Globally, the European assemblage is highly distinct since it seemingly includes early-diverging ‘relict’ hadrosaurs (including non-hadrosaurid hadrosauroids) as well as lambeosaurines (like Pararhabdodon, Arenysaurus and Blasisaurus) and possible hadrosaurines. And… in keeping with what I said above about Hadrosaurs not being limited to members of Hadrosauridae alone, I should note that Tethyshadros is a non-hadrosaurid hadrosauroid (Dalla Vecchia 2009). Incidentally, I haven’t mentioned here the fact that some workers now use the name Saurolophidae for a clade more or less corresponding to Hadrosauridae. I’ll come back to that in a future article. 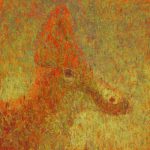 By sheer coincidence, my colleague and associate John Conway has recently been producing hadrosaur-themed artwork, and here’s something very new: a digital painting of the Asian lambeosaurine Olorotitan. The original is here, where it’s available for purchase. Credit: John Conway

Ok, we now take a short break – the second part of this review will appear in the next article. Come back soon. Some of the work here originally appeared on my patreon where you can see my stuff as it comes together and help support my projects and research. 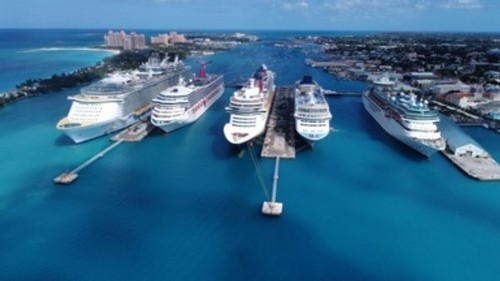 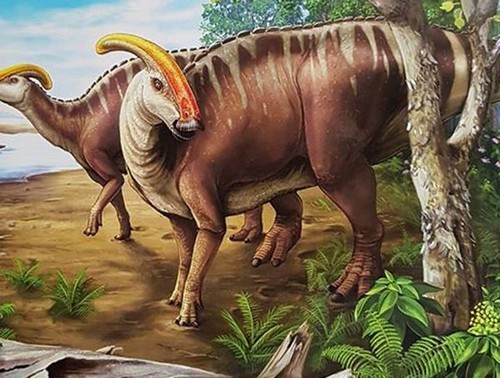 5 Comments on “Eberth and Evans’s Hadrosaurs, a Book Review, Part 1”