Snow and swamp rover Predator is indispensable for hunters and fishermen who seek to reach wild places with a difficult terrain. Passing without difficulty all difficult sections will allow the installation of additional options that can be purchased independently. 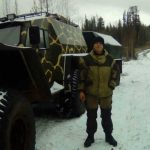 Off-road vehicles are now on sale for more than enough. However, to find a model on which it would be comfortable to move both in the snow and in the swamps is not so easy to find. Snow and swamp trail Predator manufactured by Mega West has all the necessary characteristics to overcome such obstacles in the way of a hunter or fisherman.

Seeing an all-terrain vehicle in a photo or video, even a person far from technology can understand many of the advantages of the unit. If you dig a little deeper, then the characteristics will show you simplicity and versatility in execution, as well as a fairly reasonable price.

The manufacturer began producing such a vehicle back in 2007, now the lineup has five modifications. None of them can be considered a full-fledged amphibian. Rather, the Predator can be attributed to all-terrain vehicles made on the basis of the well-known GAZ car. Moving through water is carried out due to the large displacement of the wheels, and not due to buoyancy.

Snow and swamp rover Predator has such distinctive features: 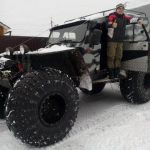 A vehicle with such indicators is very much in demand among the Ministry of Emergencies, exploration expeditions, and the armed forces. Fishermen and hunters use it both in the spring-autumn period for getting to hard-to-reach places, and in winter for passing difficult sections of the road.

The official website of the manufacturer offers everyone Predator with two power units. Here, everyone has the right to choose independently, their indicators are as follows:

Fuel consumption will vary depending on the model, the 29 series takes about 10.5 liters, but 39 more, up to 14 liters. Reviews about the snow and swamp rover Predator correct these figures a little, on average the 39th series will consume up to 17 liters, but with the described characteristics and capabilities of the unit this is quite normal.

It is worth noting some more features that the vehicle has:

Together, a powerful all-terrain vehicle of domestic production was obtained, which is practically not afraid of any obstacles.

What is the price of a complete vehicle?

You should make a purchase on the official website and from representatives of this manufacturer, only then at an affordable price you will receive a complete set. You can buy a predator snow and swamp vehicle through an intermediary, but only when purchasing check the availability of the basic configuration.

Attached to the all-terrain vehicle:

It is with this configuration that the Predator leaves their factory and goes to the buyers. The cost will vary depending on the versions: 29011-29012 costs from one and a half million rubles and up to 1800 000 rubles, six-wheel ones cannot cost less than 2 million rubles. The price of used vehicles will vary, but sellers are in no hurry to dump a lot.

It is impossible to find a worthy analogue with the same characteristics of passing obstacles in the market. Other manufacturers are trying to create something similar, but so far no one has managed to get around the Predator.

Several vehicles of this type have proven themselves well:

Each of them will be inferior to the Predator in one way or another. But they compete with each other with dignity.