According to repairmen, they most often turn to them for advice on raising the rear of the snowmobile. You can do this yourself at home.

How to raise the suspension in a snowmobile Taiga 500 is not known to everyone who has such equipment on the farm. There is nothing complicated in this, more experienced comrades share their experience with pleasure.

If the operation did not give the desired result, then there is only one thing left, replace the old springs with new ones.

The process consists of the following steps:

Everyone knows about the presence of suspensions in snowmobiles, but for beginners who are not familiar with equipment in general, it is not clear why they are needed. Suspension of a snowmobile Taiga performs several important functions, including contributing to a softer gliding of skis on the snow cover.

The rear suspension of the Taiga snowmobile, as with other models of snowmobiles, is of great importance. For the normal movement of equipment in the snow, it is necessary that this spare part is ideally suited in all respects.

The pendant is as if divided into two parts:

It often happens that these two parts are interconnected for more comfortable movement and better distribution of weight on the snowmobile. 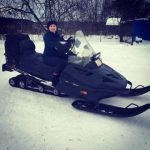 Reasons why the suspension needs refinement or replacement

There are many reasons to replace or upgrade the suspension at the rear of the snowmobile. We must start with the fact that there are two types of suspensions, each of which will require its own tuning. Each of the varieties serves to perform certain functions and is applied to a specific type of vehicle.

Modify or raise, as well as replace the suspension is necessary if it does not cope with the duties assigned to it.

You can notice this when moving on the technique:

If your snowmobile has at least one of the above malfunctions, then the suspension must be raised or simply replaced with a more suitable one.

What is a Taiga 500 Snowmobile Belt Stop

Sometimes in workshops, more experienced comrades when examining a vehicle of this type say that it is necessary to put in order the tape stop. And what is it and what is it for?

The limiter controls the uniform distribution of weight on the snowmobile when driving. If this part of the suspension fails or performs its function poorly, the frame and internal parts of the equipment will suffer.

Is it necessary to register such changes in Gostekhnadzor?

In our country, a technique such as a snowmobile must be registered, and to drive it, you must have category A. Rights for driving a drunk vehicle are subject to a fine and deprivation of rights for a period specified by law.

Inspection of a snowmobile also relies, depending on the capacity and type of vehicle it is held every six months or once a year. Improvement or modernization is not necessary to legally approve.