According to the owners, the snowmobile often breaks the ignition unit. To solve the problem, it is required to install a capacitor 4.0 MKF 600V, and to remove the old ones. Damaged coils are disassembled and rewound. 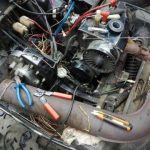 The total number of turns of the pulse winding should be 250, and the supply 4500 (experimentally), wire 0.15 mm. Winding starts from the mass. In case of failure of the ignition parts, replace the elements: TVS1, magdino and the switch with serviceable ones and start.

Before you start installing a new ignition on a Lynx 440 snowmobile, you should find out that the device supports 440-150801010 flywheels of different variations – “SB” and “U”. Previously, in the production of ignition system kits, the polarity of these parts was standard (the same as on current Rybinsk models). The new 440-150801010 models do not fit other snowmobile models. They have different crankcase mounting positions.

Flywheels “SB” and “U” (manufactured in Ufa) are used with contactless ignition on the “Lynx” model. The flywheel of this snowmobile does not fit the Buranovskiy and Taigov variants.

How to install Moscow ignition on a snowmobile Lynx

The system parts needed for this work are located at the regular points of the snowmobile and the motor. Procedure: install the magdino in the appropriate places so that 2/3 of the grooves are located on the left and 1/3 on the right, if you are guided by the mounting hole (Figure 1). Make sure that the magdino is turned counterclockwise.

The final adjustment of the new ignition is made not by a stroboscope, but on the go: turn the magdino clockwise or counterclockwise by 1 degree so that the angle reaches 24 degrees at high speeds.

How to adjust and adjust the ignition

To configure the ignition, use these tools if the system is on Buran:

According to the instructions, draw a scale and mark the degrees on it, then draw a circle on the paper so that its diameter matches the size of the fixed element of the mounted variator on the device.

The central part of the circle is the middle of the edge of the crankshaft.

To adjust the ignition timing, you must turn off the engine, loosen the magdino screws and turn the base of the latter by the desired amount. Repeat the angle check using the straboscope.

Turning the base clockwise will make the lead angle smaller and increase it against it. An offset of 0.9 mm corresponds to its change by a degree.

After the replacement is completed, the base of the magdino needs to be checked, the ignition timing should be established with risks applied to the hull.

Indications of UOZ in the process of using different components:

At maximum engine speeds, the ignition timing should be 21-23 degrees. In addition to high revolutions, in addition the SPL can be checked at idle – 14-17 degrees and at start-up revolutions – 8.5-11 degrees. To set the correct parameters, you need to use a universal tachometer. Priority indications: the position of the base of the magdino, which provides the desired angle at high speeds.

How much is it

New models were discontinued in 2009. There are used snowmobiles on the market.

Average cost depending on modification: