The main feature of the snowmobile is that the model is made as a well-tested classic. Stealth “Ataman” is made, like most modern snowmobiles, according to the scheme with two skis in front and one track in the back. This gives good control and agility, but is not always the most stable scheme and is often inconvenient when moving through the forest. 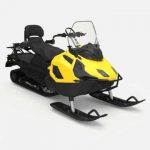 However, having some experience, the driver Stealth Ataman will be able to pass any obstacles, while maintaining good speed. She, by the way, is not the smallest and is able to compete with products of the “sports” class. Here, the elongated base also gives confidence when driving. Although it affects badly on the turning radius, it allows you to keep speed and overcome bumps, bumps. And also to move on very deep and uneven snow.

Manufacturers claim that the new model is designed to occupy the niche of utilitarian-tourist snowmobiles. That is, this machine is suitable for travel, hunting, fishing, and for household needs – the work of huntsmen, search services, meteorological.

The latter will require good performance in the northern regions of our country, where snowmobiles are most in demand. Accordingly, it will require the ability to start the engine in severe frost, the ability to move confidently in conditions of poor visibility, when polar night reigns. This is a serious enough test for any snowmobile.

Motovelo company for many years pleased the Russians with its Stels bikes. Practical and inexpensive, they have become for many reliable and affordable companions. New products from this company – STELS Ataman snowmobile.

The front part of the running snowmobile is represented by a pair of skis that use the steering wheel when turning, and the rear – a wide caterpillar, which is used for movement. It’s convenient to present the general characteristics of the chassis of the Ataman snowmobile in the form of a table:

The traverse on the front suspension, made removable, improves the usability of the snowmobile. Including when driving along a slope, when there is a big chance to fill up the car on its side. The traverse is removable, this allows you to quickly replace it on the way in case of breakage without additional fuss when replacing ski skis and shock absorbers. The rear suspension has good stiffness, the ability to adjust and fairly evenly responds to the entire length of the deformation. This adds comfort to the driver and passengers when driving, because it is the rear shock absorber that damps most of the vibrations that are negatively perceived by them.

The width of the track and the lug height for a sports snowmobile look pretty tolerable. However, for operation on loose snow, perhaps they will be insufficient. Probably, the enlarged bearing surface of the track is designed to reduce this drawback.

Snowmobile Stealth “Ataman” has technical characteristics that are a cross between sports and purely utilitarian models.

There are a number of original technical solutions.

All specifications are not final. The device will be finalized before its official release, which is due to take place in the fall of 2019.

The ideological predecessor of the Stels Ataman snowmobile is the Viking Stealth. This model has proven itself, is relatively inexpensive, reliable, but in northern conditions, the Viking required some alterations. Probably, the creators of Ataman tried to take them into account and make the new snowmobile more suitable for operation in harsh conditions.

In turn, the Viking is a kind of adaptation of a very similar snowmobile, Yamaha Viking, to the production conditions in Russia. This snowmobile has established itself as an extremely reliable car, but because of its high cost it was used mainly by individuals for hunting and fishing in the winter.

It can be additionally equipped with drag sleds and a tow bar for them. Estimated load capacity of the sled is about 250 kilograms.

It is still unknown what price limits Velomotors will adhere to. On their official website, the Stealth Ataman snowmobile can be seen at an estimated price in the region of 550 thousand rubles. However, most likely, this is a pre-order or limited party, since it has not yet arrived at retail. Well, we can say that in comparison with the same Yamaha it is much cheaper, and in general terms it is not inferior to it. It remains to look at the snowmobile in the hands of our users when it will be on sale and listen to their assessment of the reliability and convenience of the snowmobile.