Lynx was produced in Russia, and at the moment a new one can be bought, but only from private traders. It is recommended to learn more about it before buying, in particular, about how to properly operate it. 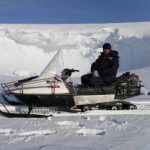 The device can cover long distances on snowy roads. It tows sledges with loads of up to 250 kilograms, and it can be used for recreation or food production at temperatures up to -40 degrees.

Before starting, you need to check the operation of the device, namely the gas and brake control levers, then put the machine on the parking brake.

The cord of the device to quickly stop the power unit must be attached to clothing. After starting the engine, detach the parking brake lock.

U-rolls can only be turned while the snowmobile is moving at speed to prevent malfunctions of the steering wheel.

After unpacking the transport, you must perform the following steps:

To attach the skis to the racks, you need to put a support under the front half of the snowmobile, which will reliably support the device at a height suitable for bringing under the ski racks.

Bring the battery into working condition, taking into account the information from the instruction manual. Replace the battery and connect the appropriate cable lugs to the terminals.

Storage of the battery: turn off and remove the power source, and before installing in storage, charge, check the electrolyte level and its density.

Fuel for the engine includes gasoline and oil in the proportion shown by the manual.

Prepare the mixture in a clean container in the sequence:

First, check the operation of the throttle control lever and crank the engine by gently pulling the starter handle a couple of times with the ignition off. After that, put the cap on for a quick stop on the sphere, and pull out the button in working condition, turn the key to the right until it locks. The cord must be connected to the clothes with a carabiner.

To facilitate starting at temperatures below -25 degrees, you need to turn the fuel corrector knob up, and after warming up the engine, return it to its original state. When starting the motor, the headlamp must be turned off.

Turning on the engine at a temperature of -30 or below, you need to do this:

When starting with a manual starter, you need to gently pull the handle until resistance is felt, and then pull sharply, return the handle to its original state, holding it with your hand. If the start does not occur, then pour gasoline into the carburetor and repeat.

It is forbidden to leave when the button and devices to quickly stop the motor do not turn on. To urgently stop the power unit, you need to turn off the ignition system with the button.

It includes the following models:

Model Lynx 119 belongs to the class of tourist vehicles. It is distinguished by a powerful engine and a high level of design reliability, maneuverability.

The device is equipped with a push-pull power unit with an forced-type air cooling system. The engine of this transport is made taking into account the environmental standard of Euro-3 fuel. The maximum speed is 90 km / h. The dashboard reflects only two parameters: speedometer; gas level sensor.

The caterpillar mechanism of the machine is made of rubberized material and equipped with rods, which will help increase the period of its use.

The 4-stroke power unit is cooled by penetrating snow into the intake device. If you drive for a long time in an area with a small amount of snow, engine overheating may occur.

The snowmobile is equipped with a gearbox with 6 gears, a powerful two-stroke engine is installed. The vehicle is capable of towing a tow hitch, the mass of which does not exceed 250 kg.

A motor from a Japanese manufacturer is installed here, the engine is made in accordance with the international environmental standard Euro-3. The tracked device is made of rubber and fabric and is equipped with a reinforced rod.

The starting system is powered by an electric starter, which helps to start the unit even at low temperatures.

This snowmobile has been released in several versions.

We suggest you familiarize yourself with them:

Now Lynx has gained great popularity, because it allows you to carry out all the necessary tasks, in particular, to move to difficult places.

The sports version is shortened. Due to this, the device added to maneuverability.

The tracks of the Lynx Sport 121 snowmobile are created with an improved power core – this gives certain guarantees of the high reliability of the developed design.

Despite many shortcomings, there are good indicators.

The average technical characteristics of the Lynx snowmobiles:

The Sport 121 model has a high glass with a fringing that protects the driver from the incoming air flow, and there is also an electric heated handle. The device is equipped with a tachometer and a large trunk. The machine can tow a sled weighing up to 250 kg. The caterpillar made of rubberized material has reinforced rods.

Disadvantages of a Snowmobile Lynx

Before buying, it is recommended to find out about the main disadvantages:

Lynx owners, in particular the 500 model, have problems with the transmission chain. It must be regulated very often: first after passing 25 km, and then 50 km, when running, then after 150 and every 300 km. After purchase, for 2 years of operation, the chain in the gearbox, the bolt on the ignition system may break.

Despite the good technical characteristics, the engines fail. The reason for this is wear.

B ashche all owners face such breakdowns:

Another cause of problems is carburetors, after the manufacturer switched to Japanese, most of the malfunctions disappeared on their own.

The weak point of 2-stroke engines is candles. When mixed, oil and gasoline can damage spark plugs, which makes it impossible to start the engine cold. Because of this, it is recommended that you use a few extra candles on a long snowmobile trip. Failures with flap valves and carburetor can also lead to improper starting of the engine.

The snowmobile begins to stall when there is no spark, with correctly working candles, the coil may be the cause of the malfunction. The owner will be able to replace these items.

Improper fuel supply and increased or low gasoline consumption are signs of a malfunction of the gas pump; to clean them, you need to clean the part well.

The positive quality of domestic snowmobiles is a quick and inexpensive repair, which does not cause problems. Original parts for an all-terrain vehicle can be bought at many automobile stores, while some of them are similar to motorcycle parts.

What is the most successful Lynx snowmobile model

Modification 119 is the most popular, having passed all the tests and has proven itself on the positive side. The owners noted the good side of the wide caterpillar, demonstrating good off-road capabilities, which has become useful to hunters, border guards, geologists.

Model 119 passed all the necessary tests. Lynx 119 is suitable for difficult operating conditions, has good cross in deep snow, is maneuverable and dynamic.

Model 119 Snowmobile – a deep modernization of 113, which was developed on the basis of the foreign Arctic Cat. Manufacturers admitted that the copy was unsuccessful due to the fact that the motor did not hold a high load in harsh conditions. As a result, the question arose of producing updates to 113 models.

In car 119 there are major changes relative to the previous model. Updated transport has become like a tourist, which means a high level of endurance and high quality. Engineers decided to reduce the working volume of ICE to reduce gasoline consumption, power and windows were increased.

How to Improve the Lynx Snowmobile

Often, a cooling system needs to be modernized. If the fulfillment of all requirements for changing the oil, adjusting various systems does not give a result, it is recommended to refine the engine cooling system yourself. The easiest way out in this situation is to insulate the exhaust system with insulation. The meaning of this is that the air does not heat up through the manifold, in addition, this method reduces noise. The silencers of foreign-made apparatuses are initially packed, consisting of materials with a high degree of noise absorption. The right decision is to make a separate inlet to the air intake or heat shield to protect against the negative effects of the muffler.

Now it is necessary to improve engine cooling and lower the temperature of the cylinders, in general, install a screen between the output type manifold and the engine cylinders. The objective of such a device is to cut off the air in the cylinders and to protect against additional heating. If there is no such solution, it is recommended to use this method: make a plate and install it, regardless of the brand of the snowmobile. The design effect is noticeable even without the use of electronic temperature sensors of the power unit. The thermal stress of the cylinders is especially reduced.

The latest refinement of the cooling system is to increase the speed of the impeller of the device that moves the gas. It is necessary to change the dimensions of the pulley and at the same time use the abnormal dimension of the fan belt, for this improvement you need to contact a specialist and be able to choose a fan belt.

Depending on the modification, this criterion may be different.

Therefore, it is recommended to finally make your choice in favor of a certain model, taking into account the prices of modifications:

You can buy a Lynx snowmobile only from private owners, there is no official website, but you can find a new model from owners who have not used or almost never used the device.