It is advisable to purchase sensors from the manufacturer in order to avoid buying a fake. You can, of course, not buy or install anything, thus saving your own money, time and effort. But, as practice shows, such savings can very easily go sideways for the owner of a snowmobile – engine repairs cost several times more.

Correct, stable operation of the engine depends on many factors, the most important of which is its temperature, this is especially important for two-stroke engines with air cooling – this also fully applies to snowmobiles.

At high speeds, as well as with significant or even transcendental loads, this parameter can rise to a critical level. Long-term operation in this mode leads to quite serious breakdowns, which means costly repairs. Therefore, users need to know what the working and critical temperature of the Taiga 500 snowmobile is.

How to measure the temperature of a snowmobile engine

It is necessary to monitor the operation of the engine.

In order for the mode to be maintained at the desired level, there is a cooling system on all snowmobiles. Monitoring is better done using a special temperature sensor.

It is especially important to do this on two-stroke engines.

Not all snowmobiles have sensors installed from the factory, so for many it is strongly recommended that you install them yourself or in a workshop.

So, when a display with a digital display is displayed on the dashboard, you can control the fairly accurate temperature of each cylinder.

The principle of operation of most sensors is the same as on Soviet-made snowmobiles:

On the Lynx snowmobile, a threaded hole was made on the cylinder, where the indicator is screwed.

Other models of similar technology do not have such holes – they need to be drilled in order to install the sensor. If the snowmobile is guaranteed, then this solution is not the best one – so you can lose the warranty. 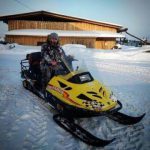 If the snowmobile is water-cooled, it is possible to install a metal pipe with a thread that is built into the cut hose of the cooling system.

On the Taiga 500 snowmobile, a temperature sensor (TsITD-5 TPT-3-6U) is installed under the glow plug.

This solution is relevant for any motor vehicle.

Using TSITD 5, it is possible to identify not only the temperature of the motor, but also other important indicators:

High temperature is the cause of the above malfunctions, and it should not only alarm the owner of the snowmobile, but also look for the causes of its occurrence.

a brief description of

Brief description of the device:

When the temperature of one or both cylinders reaches 195 °, the indication displays the temperature to the limit of measurement (250 ° C) in the pulsation mode.
Such a signal of indicators indicates that a critical temperature is approaching.

How to install the device

In order to install the device TsITD 5, you need to embed it in the panel. The case is protected from falling out of the cut-out window by means of L-shaped brackets fixed on screws.

As already clear from the above, the operating temperature of the Taiga snowmobile engine should not exceed 190 ° C, and its growth serves as a signal to take measures to reduce this.

If this indicator continues to grow, it is highly recommended that you do not turn off the snowmobile engine. In this case, gas is discharged, and the movement continues at medium speeds, or if this also does not help, then you should stop and reset the heat with sharp predictions.

The readings of the device must be constantly monitored, and the temperature difference between the two cylinders too – it should not exceed 15 ° C, although ideally the differences are permissible no more than five degrees.

It is necessary to start movement when the engine warms up from a mark of 30-35 ° C.

What is the critical temperature of the Taiga snowmobile engine

When the temperature of the motor exceeds 200 degrees, it is highly likely that the engine may undergo irreversible physical changes, the result of which will be an expensive repair of it. The critical temperature of the engine of the snowmobile “Taiga Varyag 550V” as well as the 550 model has no differences.

Nevertheless, the same 200 degrees are acceptable, but only for a short time.

The consumer should have an idea of ​​what the operating temperature of the engine should be on the Taiga snowmobile.

Do not save on high-quality oils – this will significantly extend the “life” of the motor.

Checking the performance of the sensor after purchase can be done before it is installed on the snowmobile.

Of course, it would be more correct to expose the sensor to the maximum passport heating of 250 degrees in order to make sure that it is in good working order.

The cost of CITD with sensors for snowmobile spark plugs is up to 7 thousand rubles. This is the factory price.

The length of the wire (along with the candle cables) is 2.4 meters, and if necessary, it can be increased independently.

The device is equipped with everything necessary for installation.

The warranty is 12 months and the minimum service life is 5 years.

The choice between two models

Quite often, the question arises before the consumer: is the Taiga Varyag 500 snowmobile or 550? Both models are very popular.

In order to correctly answer this question. The characteristics of both models should be studied.

In the standard configuration is missing:

“Taiga Varyag 550” is equipped with components suitable for the climate of Siberia, the Urals, the Far North.

Thus, this “Varangian” comes with improved equipment, but is not a source of competitive advantage.