The first thing to realize that fly fishing in this way is conducted in grassy ponds and snag areas or shallow water from shore or boat. This does not mean that otherwise should not use it. 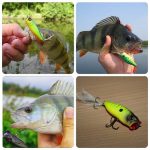 It can be applied when fishing on all waters as cluttered and clean, deep and shallow. Where fly fishing spoon is fraught with hook – safely use floating lures.

The gear has several advantages, such as sounds, vibration and lack of zaglubljaetsja. Due to the fact that the Popper floats at the surface of the water, it is difficult to catch. With rare exception, the spinning will throw my tackle in the region, where the branches stick out. Every angler knows that in such areas there are swarms of perch who is the subject of our conversation today.

There are several opinions why bass attacking a Popper. One of them says that he is trying to dislodge from its territory of a predator, the stranger, muffled in their possession. Indeed, one of the principles on which it is built, the work of Popper is to attract the attention of a predator (not only bass, but also pike) at the expense of Balkani and vibration.

Such vibrations and noises are generated in two cases. One of them, when bass finds a flock of fry and attacks her. Detail dodges and tries to escape, sometimes jumping out of the water. You probably watched the following scene on the rivers or lakes quite often.

A second opinion based on the interest of the perch to the noisy “fish” that Popper just attracts the predator with their sounds. After he sees an attractive prey and can’t pass. The meaning of this is, but what is really going on in the head stripe is unknown.

There are cases where at the time of posting very frequent gatherings. You are the bait, noticeable bumps, but the fish are not podscasts. Experienced anglers often attribute this to the fact that the predator tries to catch the prey and tries to chase it away from their territory. The reasons for such behaviour can be multiple, one of them is that the bass is full, and does not intend to attack. Thus it shows who’s boss.

With regards to the size of the Popper, don’t focus on it seriously. Frequently used size is 6-7 cm, as an example of 3ds popper from yo-zuri. The model has shown itself perfectly and zarekomendovala hundreds of anglers. In addition to a stable perch she caught the pike, which is certainly a plus.

If the bait will more than 6-7 cm, not a problem. The perch is a greedy fish, able to swallow prey of large size, so first of all proceed from the reviews and the value of the goods. It should be noted that not every decoy emits a clear and loud characteristic gurgle. Some models do it somewhat quietly, the rest of the back, at the time of posting loud “slurp”.

The question of loudness of sound and spray still disagree. The part of the fishermen tend to believe that this is what Popper and should be different, attracting more predators to the sound. Accordingly, the louder it is, the more area he will be able to sh.

Others hold the opinion that too loud and clear the sound is able to scare away not only perch but also pike. Like it or not, everyone decides on the results of fishing. But I should say that brands and models of surface lures in the most efficient, despite the fact that issue when you post a loud sound with a lot of spray.

A lot depends on the transaction. If you pull spinning briefly and abruptly, the sound will be louder, the stronger the Popper will stab you in the water, and the more spray. You can play with the rod a bit looser and not so sharp: in this case, the movement of the lures becomes more sluggish, calm and quiet.

To talk about methods of transactions we will not, because it’s not complicated. After the breakthrough podmahivala the line, waiting a short time and re-do the jerk of the rod tip. The intensity, speed, strength and pause time, choose depending on the mood of the bass. To say exactly how he will bite today, and change tactics and there catchability version of the posting. Color Popper bass is irrelevant, it is the practice and the experience of the masses of anglers. Choose colors under this predator is inappropriate because it is not very selective in its prey.

Installation as well have no particular preference. Popper you can knit directly to the braided cord, but in this case, when the biting of a pike you can lose tackle. Classic snap application a leash of strings is common. And when you hit larger and more dangerous predator will be less worried about an expensive decoy.