In order to maintain a sufficient number of ichthyogens in many reservoirs of our country, a spawning ban on the catch of certain types of fish has been in effect since early April. 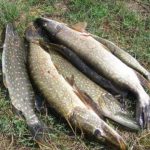 This norm was developed and introduced after a significant reduction in fish resources. Now the number of fish in water bodies is gradually normalizing, but many do not know about the ban and continue to fish. It is in this case that fish supervision can apply administrative rules to the fisherman, according to which they will have to pay a fine, and in some cases the offender will even face  criminal liability .

From a biology course, each of us knows that fish have a spawning period, and it was at this time that they spawn, from which fry will later emerge. According to the law, during the spawning period, the catch of pike and other fish species is completely prohibited or has significant restrictions on the gear used. Novice fishers should understand that ignorance of the law does not exempt from liability. The fine for catching pikes will have to be paid in full.

It should be understood that there are many regions in our country, it is impossible to establish a ban on fishing at the same time everywhere, since spring comes at different times. Therefore, before going fishing, you should first find out more information about the prohibitions and restrictions in the selected region, so that the arrival of fish supervision is not a surprise.

The size of fines for pike to spawn or for other offenses is also set purely individually by region.

The subtleties of fishing during spawning

Not always a fine act is issued for catching pike during spawning. In most regions, fishing with amateur gear is allowed, but some prohibitions are still present.

In the “month of silence” is prohibited:

These are the main prohibitions, depending on the region, they can be supplemented and clarified.

In order not to become a poacher, you need to know who you can catch and what gear. We consider all the subtleties below.

What gear is allowed to use

It is allowed to catch pike in the spawning period, but you need to know what gear to use. In addition, you must carefully approach the choice of place.

Allowed gear can be presented in table form.

It’s not a ban at all for zergirls; such tackle should wait in the wings, as well as a zakidka.

You can catch pike during spawning in all reservoirs with the gear described above, but not in spawning grounds. In each region, it is prescribed where the fish goes to throw eggs; there, the capture of any kind of ichthyol is completely prohibited.

How can I catch

Is it possible to catch pike from a boat during spawning period? The legislation prohibits this categorically, not only a fine is imposed for the violation, but also confiscation of the watercraft and gear.

Fishing is carried out only from the coastline.

The period of the spawning ban usually lasts a month, but in each region the authorities have the right to decide when and for what duration to set restrictions. It all depends on the temperature and the individual behavior of the fish in the pond.

On paid reservoirs there is no ban on spawning or other seasonal restrictions.

Among conscientious fishermen there is an unwritten law, to release any fish with caviar if it received minimal damage to tackle. If, however, an individual caught in the spawning site is taken away, then the fish inspection will prescribe a fine during the inspection.

In case of non-payment of the fine for fishing within the prescribed period, a penalty is charged, and travel abroad is strictly prohibited. In addition, a systematic violation of laws can lead to criminal liability.

Spearfishing provides for completely different fines and restrictions; it is strictly forbidden to use this type of catch.

Recent additions to the law

In April, the latest amendments to the law on the spawning ban were introduced. According to the legal act, a “month of silence” is mandatory throughout the country, during which the catch of any fish is strictly prohibited in many areas. Significant fines and other administrative penalties are provided for the violation.

Can fines be avoided and fishing during spawning?

Is it possible to catch a pike during the throwing season or is it better to abandon such a hobby for a while? Pike capture can occur at any time of the year, the main thing is to choose the right place for this. In spawning grounds this is strictly prohibited by law, but there are other fishing spots.

No penalty is terrible if the water area is caught offshore, while the gear consists of one hook, and the vehicle is left more than 200 m from the water’s edge.

If you went fishing during the spawning season, you should carefully select the gear for this hobby, remember that shooting from a hunting rifle under water is strictly prohibited, and you can only catch with one hook. It should be understood that this is not the whims of the authorities, but a necessary measure to preserve the population of different species of fish in the reservoirs of our country and treat this with understanding.