The pike fishing in the spring is a very interesting activity that attracts all fishermen. Among them are the fans spinning fishing, using crankbaits, silicone baits and lures. But there is a place for lovers of fishing on live bait. Let’s specifically deal with each type of fishing.

The pike fishing in the spring on spinning

The pike fishing in the spring on a spinning reel is the right choice of equipment and its application. One of the main factors for choosing a fishing rod is its strength. And the length of the spinning need to choose based on the conditions of fishing, that is whether you are catching from the shore or from a boat. If you plan to fish from a boat, then buy a spinning reel with a length of over 2 metres to nothing. Well for successful fishing from shore, you can get the stick longer.

The structure of the rod is chosen on the basis of the applied baits if you are going to catch on spinners, it is best to use the spinning slow down. But the lures of the easiest to catch with spinning fast and middle order. As for the coil selection, here special tips, the main thing that it was with the smooth running and liked you.

For easy playing big pike you need to choose mono or braid for spinning. If you catch pike with jigs, it is better to prefer the second option. Due to the lack of stretchability woven cord allows you to easily control the bait. Well, to use the classic lures suitable quality fishing line.

Now about equally important parts of the equipment. I recommend to use fluorocarbon leashes, if it is not possible to make or buy, then of course the fit and steel. Everyone knows that pike have sharp teeth, and without a leash she’ll just cut your bait.

Novice anglers often make mistakes when choosing gear. The main mistake is the opinion of the voracity of the pike, and the use of rough tackles. To some extent they are right, but such a set will run only two weeks before spawning and after a few weeks after him, and then pike becomes fearful and lacking everything.

The pike fishing in early spring on crankbaits

The spring pike fishing lures will be more effective in the second half of the day, it is best to choose a warm and quiet weather. As the water warms up in the upper layers, the whole fish is the pike after him.

This property feeding promotes the use of lures of small size. If equipped with the m of the small size, about 5-7 inches long, it is possible to catch quite a lot of fish in small river bays.

But you need to apply a very slow transaction to bait stayed in one place and do a protracted pause. The best lures for pike in the spring is: jackall tiny magallon, yo-zuri 3d minnow floating n C yo-Zuri sashimi minnow 65. 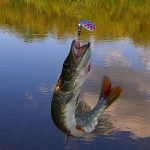 But this happens only in early spring, but later the water stops to warm up in layers and the temperature is distributed evenly. At such times, to raise the pike up becomes much more difficult.

It is best to replace plugs on a deeper, but also small in size. The catchability wobblers for pike in the spring in my practice proved Megabass Ion 55S XS, sinking copy Rigge.

Fishing for pike by trolling in the spring

If you are going to fish for pike by trolling in the spring, it is best to use spoons. A classic of the genre, which most fishermen prefer for many years. Fascinating move, that attracts pike of any size, even passive, and in the spring she is almost constantly. The choice of color lure an individual matter, but I prefer to use gold and silver spinners.

Heavy spinners are moving pretty slowly and sink quickly, so it’s best suited for passive fishing pike on the deep parts of the reservoir. But for hunting the predator in shallow water it is best to choose a relatively light bait.

Despite all the moodiness pike in the spring, if properly pick up the spoon, and then it still right to hold the catch provided to you. In my practice the biggest pike were caught on spinners.

The pike fishing in the spring on the river

It is best to pay attention to a small shallow river with an abundance anomalies of the bottom. A peculiarity of these rivers is the rapid alternation of currents with slow. Due to this change in flow rate, the water is heated evenly and pike hunting around the pond.

After spawning the pike rests and full of energy, she comes zhor. Just at this period the fishermen have every chance to catch a fish of impressive size. Best fishing during the period when the river gets less water, and all algae have already started to rise from the bottom. If the water in the reservoir is transparent, and happens quite often, then you should try to be unnoticed.

Let’s look at a little cheat sheet on where to find pike in the spring:

Before fishermen start to firmly get involved in pike fishing, they go through the hard way. Some tear off almost all of the bait, others do not know how to strike and break the rod, but others just take the fish “impudence” and it constantly breaks down.

And that’s just in this period, most fishermen abandon fishing for pike on a lake and armed with a float rod go look for peaceful fish. But just want to say that not to blame a capricious predator, primarily due to lack of experience and the most common mistakes.

For those who tried to catch a pike but it didn’t work, well, for those who have not tried is the best place to master the subtleties of fishing for pike is best suited lake, even better a small. But the main thing that there was the fish. Better yet, if you do not immediately start spinning, and the first time will try to catch pike on live bait

As live bait in the spring it is best to use small roach and a small perch. In order to attract the attention of a sluggish predator live bait must be very lively and fresh. Therefore it is necessary to place him on the hook very carefully.

Pike fishing in the spring jig on small rivers

Jig pike is very nice catch in early spring, preferably in March-April biting soft lures pretty well. Since the choice of silicone baits is quite extensive, the fishermen can always find a Twister or vibrohvost them any color or size. They are the most popular baits among anglers spring.

A huge advantage jig baits is the possibility of pike from the bottom. Immediately after the ice melts lethargic fish still on the deep, precisely in such periods, jig baits, and allow access to the predator.

We advise you to choose bait small size, best suited twisters 50-70 mm long with a bright color. I prefer white-colored, green and red. Preferably combinations of them.

The weight of the jig head is selected depending on conditions of catching. On small rivers it is best to catch with bait heads not weighing more than 15 grams. Sometimes the weight is greatly reduced.