Everyone who has visited the pond several times notes that there is favorable weather and not quite concomitant. It is in the subtleties of weather conditions for catching trophy pike that we will understand further. 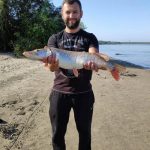 Experienced anglers know that biting fish depends on many factors. Some of them directly depend on the person, while others he is not able to lead, it is the second type that includes weather for pike fishing. It’s not enough to have a catchy bait and choose the right place, the favorite hobby should also be combined with a synoptic forecast.

It is not enough to choose a promising place for pike fishing , to capture a trophy you need to contact the heavenly office and find out what the pressure will be during the period of the alleged fishing. The capture of a toothy predator will certainly be successful with stable performance , but sharp jumps and drops will make their cohabitant lethargic and inactive.

The ideal option would be a stable pressure for 3-4 days in a row, it is on these days that the pike takes almost any bait both on lakes and rivers.

In windy weather, pike are caught in open water, but everything should be in moderation. A good indicator of the strength of the wind for each individual pond that loves pike is a large ripple in the water . In a small, closed lake, ripples can hardly be achieved at 6 m / s, but on a large one it is quite possible.

Does the pike peck in the calm? The answer to this question is unequivocal, of course not. Such weather moments are not suitable for her, potential victims can easily see her. But even in a strong wind, she may not react to any of the proposed baits.

In complete darkness, it is caught poorly, but too bright daylight does not attract it.

This is explained by the characteristics of the behavior of the food base of the predator:

In what weather is it better to catch a pike then? A cloudy sky is ideal, toothy will peck especially well on morning and evening dawns, as well as from 11 am until noon in the complete absence of sunlight.

Wind is important for pike, but rainfall is also not in last place. In the rain with a little breeze, toothy pecks best in the fall, but in the summer, such weather will be ideal for capture.

In what weather is it better to catch a pike in the spring: in the rain, so definitely there will be no bite, you need to go hunting for pike in sunny weather.

The Earth satellite has a direct effect on their ichthyodes, especially on their nibble. Pike is no exception, the phases of the moon do not affect very much.

Experienced anglers say that it’s the full moon with all other excellent indicators that not everyone can catch a pike. To do this, you must have a special fishing fart.

Having learned all the subtleties, I want to make the following conclusion: you need to go for a new moon for a pike, at a moderate air temperature with stable pressure indicators for several days and always with a small rain. Then everyone can definitely get a pike without any problems.

What weather is better for pike fishing can not be clearly said, each time of the year makes its corrections to these indicators. In spring, the best weather for catching pike is necessarily with the sun, but in summer and autumn, the daylight will only interfere and scare away the predator. Next, we consider all the subtleties of weather conditions for an excellent bite for each season separately.

In the autumn period, it is best to go for a trophy pike in the rain, which has not ceased for several days. The temperature regime is moderate, at 16-20 degrees of heat during the day, the water in any body of water will warm enough, but not very much, and this is exactly what the predator needs. 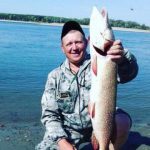 In sunny weather it will be more difficult to catch a pike. This is due to the already stopped flowering of water, it becomes transparent, and a careful predator can see the danger from far away.

Bait in this period is not carried out at the very bottom. In medium thicknesses. The best time will be the lunch and afternoon.

From mid-October, a zhor begins to pike at the pike, it will peck at everything without exception and practically without special regard to weather conditions. The only important indicator will be the phase of the moon, it is better not to go to the pond in the full moon.

In winter, the  pike pecks better at the ice, there is still enough oxygen in the pond, it continues to actively eat, so it is easy to attract it with almost any bait.

Deaf winter with severe frosts is not the best time to catch any kind of fish. Few people go to pike during this period, and indeed there are few fishermen on ice. But even in this period it is possible to obtain trophy of a predator; for this, it’s before any warming and in sunny weather to go to catch it.

The last winter days with a drop will help even a novice easily get a pike. Fishing will become especially good on sunny days, starving pike will throw almost any bait.

Are there any peculiarities of catching once after crossing the ice and in what spring weather is the pike pecking better?

Warming will benefit everyone, the long-awaited sun will make the fish show activity. In pike, the pre-spawning zhor begins during this period, the predator rushes at almost everything. But sudden changes in temperature and pressure will play a trick, it will stop responding even to the most catchy bait.

This is followed by a spawning ban , fishing in some reservoirs is completely prohibited, while the rest are subject to significant restrictions. After spawning, in any weather and phase of the moon, the pike will not be caught at all for about 10-14 days, it is during this period that it will “hurt”. But then comes the post-spawning zhor, when the predator will throw at almost everything, this is considered the best time to catch pike in the spring.

Pike is not very fond of summer heat, on hot days it often hides to depths of 5 m . but there it will not be easy to interest her. At high temperatures of air and water, the predator becomes lethargic, almost completely stops eating.

Before the approach of a thunderstorm, when the peals of thunder are heard in the distance, but there is still no rain, just to offer the toothy resident of the reservoir something delicious. She will respond instantly, while most often on the hook are trophy specimens.

In cloudy weather with a moderate temperature, the pike will respond to almost all used baits to catch it. And if such weather lasts for several days, and in the mornings and evenings fog spreads over the pond, then everyone with minimal skills can catch a decent size predator.

Experienced fishermen know exactly in what weather it is worth going for a pike, and in which it is better to stay at home. Some willingly share such secrets, while others, on the contrary, keep their observations secret.

Some of the subtleties of weather conditions we will reveal right now:

The rest will only follow after the angler has gone fishing several times under different weather conditions.

In what weather it is best to find out a pike. Well-tuned gear and perseverance will help everyone get their trophy in any of the ponds.