Raccoon is a carnivorous cunning animal, for a long time in the neutrality regarding nepotism facilities. To whom not only considered it: the weasel, dog, cat.

In the end, it was decided to allocate them to individual subspecies raccoon. The name raccoon was due to the habit of all rinsing in water.

Externally, these charming creatures are well adapted to any conditions. By nature nomads. Can’t dwell in one area for a long time. They beckon site where a lot of edible food.

The family includes 15 members, including 4 species of raccoons: a gargle, rakoed’, kosmalski and Guadalupe. They all live on the territory of North and South America. Prefer tropical and temperate climate, close to water bodies and wetlands.

A beast of prey, raccoon, lt: tight physique, a lengthy tail and short limbs. Approximate height – 34 to 60 cm, with a weight not exceeding 10 kg Colour prevails yellow-gray with darker sides and back. An obvious feature of the exterior is the stripes on the tail and the face. When driving, it relies on all four paws, but not completely. On all foot occurs, when in a relaxed state.

The natural habitat of the main species of raccoons:

They are most active at night and sleep all day in tree hollows or other nests. On their own they do not dig burrows. Well oriented in the absence of light, good float.

How to eat and which are a way of life

Is an animal that easily adapts to anthropogenic landscape. Prefers deciduous thickets with a large number of old hollow trees. Individually, they are able to secure housing so that constantly changing place of deployment. Sometimes up to 10 animals stuffed in one hole. At night go in search of food. More than 2 km are not removed from their home.

In the dark feel comfortable, as they have night vision. Great climb on the trunks due to the presence of tenacious claws and flexible feet. You can often see them hanging upside down or descending from the tree upside down. The only representative of the genus, which empties into winter hibernation. However, sleep is intermittent and short. So, in Canada, they fall asleep for 4-5 months, and in the South can not sleep.

The diet of the raccoon is quite diverse.

Depending on the season, preference change. So, in the spring and summer, he gets to eat animal food, and closer to the fall becomes a vegetable. A characteristic feature of this species, rinse thoroughly with water all ready to put in your mouth. In captivity, he’s doing the same procedures, even with perfectly pure products. Being near human habitation, they love to dig in the trash. They have a well developed sense of touch, through which they get most of their information. 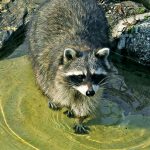 Raccoon is immune. It does not take most infectious and invasive diseases. Able to repel the attack of enemies. And the real danger they face from the outside: wolves, coyotes, crocodiles, bobcats, owls, snakes. If the raccoon sees that escape is not possible, then immediately pretends to be dead. Temperament is inquisitive, clever, quirky, intelligent animal. Lately it became been accustomed to home conditions. Life expectancy of 15-20 years.

Males are polygamous, so be ready for mating in any quantity, no matter with whom. Mating season begins in late winter or early spring, when still cold. Sometimes delayed until the summer. Female, one offspring, gives up to 4-5 cubs. Pregnancy lasts 9 weeks. The first 3 weeks babies are completely helpless and need protection and care. In the future, they become independent and begin to lead an active lifestyle.

The contents of raccoons in the home

Who wants to have a pet at home, you should consider some complexity. Due to the fact that the animal is pretty curious and hyperactive, the rest of it is not. All personal and expensive things it is better to hide in inaccessible places. Although he did not make much effort to climb on high and open any door.

It is advisable not to let him out of your sight, do not leave alone in the apartment. When the owners are not home, then close the beast in the cage. For games and free time, it is recommended to build a comfortable cage. There be sure to set the container of water. For him it is a vital necessity. As in nature, they love to climb trees, it is necessary to recreate similar conditions.

It is better to take very small raccoon, to make it easier to tame. And so they quickly adapt and become accustomed to human proximity. In puberty the character could change dramatically, becoming aggressive. For this reason, the content of other Pets risky.

If all this does not scare, we can safely make it home. Relentless fun and funny romp is a permanent condition such representatives. So will not be bored.