For the first time, the recipe for halasle fish soup was described in a cookbook from 1871. Now the dish is known not only by residents of Hungary, but also the whole world. First of all, it differs from the usual soup with a consistency and an interesting combination of ingredient. Traveling in Hungary and forgetting to try the soup or the famous goulash is a huge mistake. 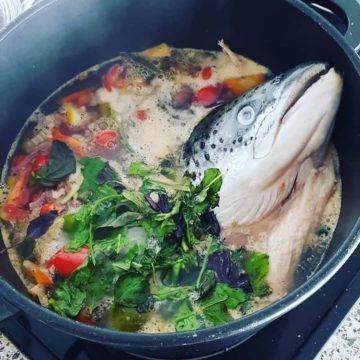 Hungary is not famous for some unique cuisine or sophisticated dishes; many recipes have not reached our days. However, one of the most popular is halasle – a fish soup with carp. In the original, the dish should be cooked in a pot over the fire, but if this is not possible, you can cook it at home, using the stove. Hungarian soup, the recipe of which contains unusual ingredients, so it will surprise even a gourmet.

Halaslas is prepared in two ways: in Balaton and Danube. Often even mushrooms and homemade noodles are added to the soup, which you will not find in the Russian ear. There are countless recipes, but the Danube and Tisu are considered the main ones. They are named so not by chance – it is customary to cook fish soup on the banks of rivers. The first option involves a saturated decoction of fish and a large number of spices, as well as noodles. In the second, practically no spices are used to enjoy the aroma and taste of fish. The local cooking options for fish soup have often changed, but the main ingredients are still carp, onions and bell pepper.

Hungarian ear is not prepared quickly, but it is worth the time spent. As already mentioned, there are many recipes, the main ingredients remain unchanged. Many culinary experts recommend using smoked fish to achieve a unique aroma if it is not possible to cook an ear on a fire. The first time it’s better to cook according to the original recipe, but then you can experiment. The caloric content of different variants of Halaslade soup is presented in the table (usually 250 ml in one plate).

The main thing in the ear is the fish, of course. Halaslas requires exclusively river species found in the Danube and Tisza. This dish is not prepared from sea fish. The basis is the carp, which is complemented by perch, catfish, pike, grass carp, roach, pike perch or sterlet. Everything that was managed to get during fishing, even the smallest various small fishes, goes to the fish soup.

Hungarians love fish soup from carp to supplement with noodles, because it gives it density and calorie content. Noodles are thick in Kalochki and thin in Paks, make it yourself. To do this, mix 1 egg and a little flour to make a dough. It is finely rolled and cut, and then dried.

Tasty mullet That the fish

Before cooking, prepare the fish. Carp must be cleaned of scales, gutted and cut off the gills, as they will make the broth bitter. Cut the fish into pieces 2 cm thick, salt well, sprinkle with black pepper and paprika. Head and tail should be left. Put fish in the refrigerator for at least an hour and a half.

Small fish should be washed and gutted, it is permissible not to clean, since the broth will be filtered.

While the meat is salted, you can proceed:

After laying the last ingredients, allow the ear to boil for 2-3 minutes, then you can turn off the fire. It is impossible to stir the fish soup after adding the pulp! You need to shake the tank, otherwise the carp will turn into slurry.

The noodles are boiled separately and transferred to a plate with an ear before serving. Sometimes Hungarians add a little wine or lemon juice to the dish to make the taste more interesting. The real ha of tomatoes, peppers and fish is served with fresh white bread. You can eat halasle immediately after cooking, but after a couple of hours the dish will become much tastier.