Wuhu is made from different types of fish, but it always turns out delicious. It is enough to know a few simple recipes and secrets, as well as properly carve the carcass. You can cook fish soup from a freshly caught fish or at home using canned food. 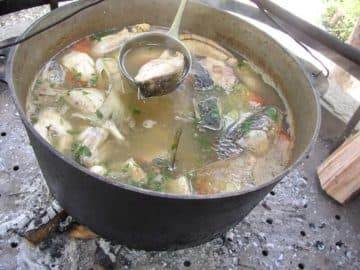 Ear from the head of pike at home is a very rich and tasty dish. The fillet is left for another purpose, such as cutlets.

There are a huge number of recipes for soups that even a novice hostess can cook. They are made from vegetables, various types of meat, sea or river fish, as well as legumes and cereals. Before you cook the ear, you need to learn more about the fish used, butchering and some nuances. You can cook on gas at home, or at the stake during fishing or camping.

What fish is better to cook from? The easiest way to cook a delicious ear from river fish. This can be done right on the riverbank, catching a fresh carcass. Examples of any size are suitable: small ones are used as a whole, and large ones are cut into several parts. At home, it is recommended to try pink salmon stew in a jar or mackerel, as well as canned saury or sea species.

It will take 1 large head (weighing about 500-600 grams) or a few medium size, in addition to this, other ingredients are needed:

How to cook pike ear at home? Remove gills and eyes, rinse head well under water. Next, send to cook on fire, do not forget to salt the water and pour spices. Wait for boiling, remove the foam and cover. It will take about 40 minutes to prepare, then you need to get your head. Chop the potato into slices, set in a boiling broth. Add carrot slices and onion chopped into cubes. Keep on medium heat for twenty minutes, at this time you can make out the meat from the bones. Return it to the pan, fill in the chopped greens and serve the ear from the head of the pike to the table.

From the river fish at the stake, aromatic and nutritious stew is obtained. The taste will be much brighter, thanks to the preparation in the fresh air from fresh carcasses of different types. Usually they use a pot or a cauldron, but an ordinary pan will do.

Cooking fish soup on a fire in a cauldron. Clean the fish from scales, make an incision on the abdomen and pull out the insides, wash. Peel potatoes, cut into several large pieces, put on the bottom of the pot. Add fish, add water, salt and pepper. Put on fire and cook under the lid for about 5 minutes. Throw a whole onion and chopped carrots. Next, you need to remove the lid, mix the foam, continue to cook on low heat until the fish and carrots are soft. From the finished soup, get the onion, add fresh herbs and tomato, sliced ​​into 4-6 slices. Similarly, you can cook the ear of river fish at home, it turns out just as tasty. 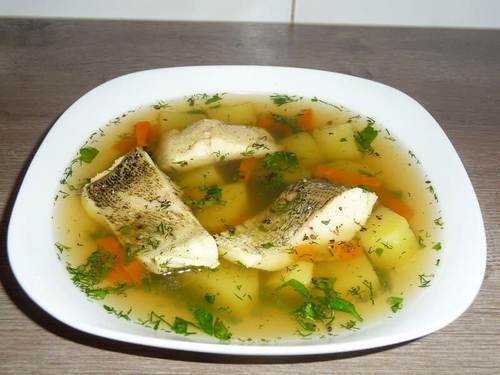 It is not difficult to make a stew of catfish in a pot; the dish turns out to be hearty with tender meat. The classic recipes use affordable products that are always at home. Fish soup is considered one of the most popular dishes in Russian folk cuisine.

What is required and how to weld:

Fish should be cut: wash and remove impurities, cut off the head (if it is large, it will be ideal to cook the ear from the head) and tail. When using the fillet, large bones are necessarily removed and the meat is cut into several large pieces. Pour catfish with water, put on fire and cook under the lid for about 45-60 minutes. Pour spices, peppercorns and salt, after boiling it is recommended to remove the foam. Peel and chop the onion, grate the carrots on a coarse grater. Remove the peel from the potato and cut into slices, toss it into a boiling broth without fish (catch the remains of the carcass to make an ear without bones), cook for 20 minutes. Disassemble the meat into small pieces and return to the container. There also send a passivated vegetable mixture, cook for another 5-7 minutes. Leave the catfish ear to infuse, and then serve with chopped herbs.

It is possible to cook a very unusual Finnish soup from pike perch at home. Use fillets, cream and several more products that complement each other perfectly. The dish is tender with a pleasant creamy taste.

Divide the fillet into large pieces, finely chop the onion, chop the potatoes into cubes. Lay out fish, potatoes, green onions in layers, sprinkle with spices and salt. Pour water so that it covers food on 2 fingers. Bring to a boil, reduce heat to a minimum and cook for 30 minutes until all ingredients are soft. Pour warm cream, boil and serve a dish prepared from pike perch at home, with herbs.

Many people think that you can only cook traditional fish soup from river fish. For cooking, sea carcasses and even canned fish with rice are suitable. Such stews are rarely prepared, but they turn out to be no less tasty than classic dishes.

How to cook an ear from a sterlet? When cooked properly, the stew resembles a dish cooked on a fire. It is not necessary to dip a smoldering log into the pan to get the taste of a real fish soup. It is enough to find an interesting and simple recipe, as well as prepare a fish. The most difficult thing to do with a sterlet is to clean it, because the carcass is covered with a thick layer of mucus.

Required products for the classic version:

Sterlet should be wiped well with napkins to remove mucus, and then cut off the growths on the skin. This species has no scales, so nothing needs to be cleaned. Rinse under water, cut the stomach and remove internal organs. Next, cut off the gills and extract the screech (a long strip resembling a parasite). Cut into large pieces and send to simmer over low heat. Then send sliced ​​potatoes, add salt and spices. Leave on low heat for 60 minutes to keep the skin soft. After half an hour add chopped carrots. The foam can not be removed, but then the ear will turn cloudy. Remove from the stove, pour vodka, put a bay leaf and let it brew for 10-20 minutes under a closed lid.

If you want fish soup, and there are no fresh carcasses at home, then you can use canned saury or mackerel. Such a fish is brewed much faster and does not require cutting, which significantly reduces cooking time.

What you need to take for canned fish soup:

Peel the tubers, chop into strips, and send them into boiling salted water. Peel the carrots and onions, finely chop and fry with butter until soft. Add the frying to the finished potato, sprinkle with spices. Remove saury from the jar, slightly knead with a fork and toss into the pan. Cook over medium heat for 5-7 minutes, remove from the stove and pour on plates, decorate with greens. Before you cook the ear from saury or mackerel, you should choose the right canned product. Do not cook from spoiled fish, otherwise poisoning cannot be avoided. Carcasses should have a pleasant smell and color, soft bones, the liquid in the jar is transparent with a small amount of fat. 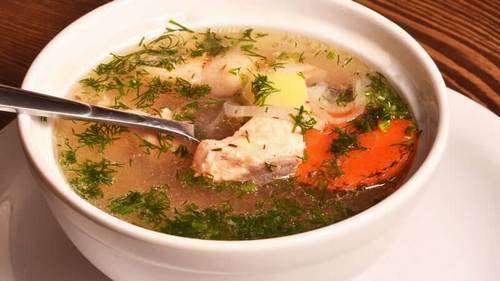 Simple tips will help you make a delicious red fish soup at home. It is better to buy trout, salmon or salmon whole. Steaks should be fried, fillet should be salted, and soup should be made from fish heads, large bones and tails. From one carcass 3-4 tasty dishes are obtained.

Cooked ear from the following products:

Wash the fish’s head, remove the eyes and gills, add water and cook. Wait for the boil, then change the water to clean, keep on low heat for at least 20 minutes. Engage in vegetables: peel, cut into strips potatoes, onions and carrots – into cubes. Parsley root with one whole onion immediately toss in a saucepan, salt and pepper. Fry prepared vegetables (except potatoes) with butter until golden brown, add chopped garlic. Get the finished fish, strain the broth and add barley to it. Cook for about 25 minutes, stirring occasionally. Next, potatoes are sent to the pan, and after another 10 minutes – frying and boneless fish meat. Boil until soft vegetables, before serving, get the whole onion and parsley root. Pour the salmon (salmon or salmon) ear into the plates and start the meal.